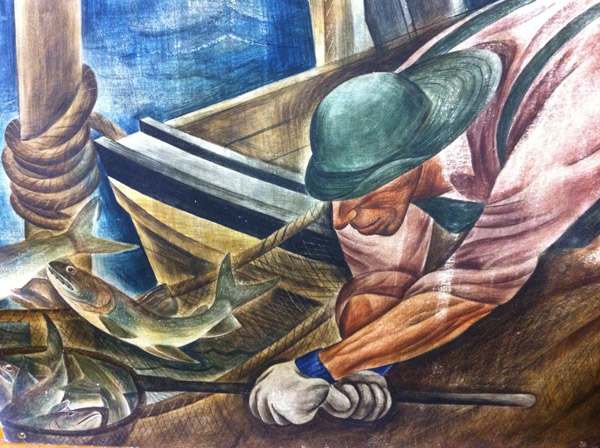 “Dad, have we ever gone on a vacation without visiting a museum?” My daughter, who now is a college Junior, asked me that question some ten or twelve years ago. While I don’t remember where we were when she asked the question, I do remember the answer:  “Probably not.”

So here I am on vacation on Beaver Island, a relatively remote island in the middle of northern Lake Michigan, writing my first blog entry for Cranbrook Art Museum. And yes, my daughter and I are in a museum, the island’s Maritime Museum, sitting in front of a large mural by none other than Cranbrook Academy of Art’s second president, Zoltan Sepeshy.

To get an idea of how incongruous this Cranbrook “sighting” really is, you need to get a sense of the context. While quite large (picture an island the size of Manhattan), Beaver Island has a year-round population of less than 500 people, many of whom are descendents of its nineteenth-century Irish fishermen. Now and again you meet someone that has a connection to the island’s most infamous resident, King James Strang. Strang was Brigham Young’s rival who, instead of leading his flock of Mormons to Utah, brought them in 1846 to this Michigan island where his self-proclaimed kingdom could exist—literally on the edge of state law. While this kingdom lasted but a few years (he was shot and killed in 1856, ostensibly by disgruntled followers), his legacy continues to this day in many of the island’s place names, including Lake Geneserath, King’s Highway, and Mt. Pisgah, to list just a few.

Although Sepeshy and his family vacationed on Crystal Lake near Frankfurt, southwest of here on the Michigan mainland, it is doubtful that the Cranbrook painter ever took the ferry from Charlevoix to the island’s only town, St. James. But the mural he painted in 1940 for the Lincoln Park Post Office near Detroit somehow made its way to the island in the summer of 1967 where it remains in the care of the Beaver Island Historical Society. The thirteen-foot long, egg tempura mural, Hauling in the Nets, depicts three brawny fishermen as they struggle to lift a net-load of whitefish into their small open boat. No, it is not a depiction of local fishermen. The imagery, nevertheless, connects with an important chapter of local history, which is why it continues to resonate with the island’s residents generations after commercial fishing ended in Lake Michigan. And to the rest of the museum’s visitors—including my daughter and me—the mural is a compelling work by an American Scene painter who deserves far more attention than he has received. But enough about art and museums, it’s time to walk over to the shed across the street and buy some fresh whitefish to grill tonight.