Getting “T-Square” All Square 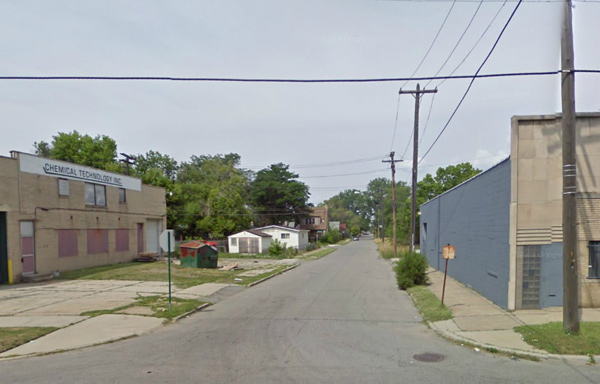 Monday morning, 9 a.m. On a typical Monday at this time, I’m settling in to my sweet Knoll-designed desk in our newly-renovated office space at the museum. “Settling in” for me means checking my calendar and email, guzzling Diet Coke, and chowing down on granola bars. But this is no typical Monday: I stepped out of the car with my three museum colleagues into a gritty, industrial corridor on Detroit’s East Side—worlds away from the meticulously manicured lawns and bubbling fountains of Cranbrook’s campus.

This is the setting for Venus Bronze Works, a local firm specializing in the conservation and restoration of outdoor sculpture. Giorgio Gikas, the founder and president of Venus, met us in his massive, hangar-like space to examine and discuss his ongoing conservation of T-Square (1975-1976), a large-scale outdoor steel sculpture by Tony Rosenthal (1914-2009) in the museum’s collection. Works of art that are situated outdoors present their own unique challenges of preservation, and T-Square is no exception: after decades of sitting directly on those aforementioned manicured lawns, the massive sculpture plainly begged for restoration and repair. Years of exposure to rain and snow had caused some elements to rust through, threatening the work’s long-term stability and preservation. Of course, Rosenthal anticipated that his outdoor steel sculptures would develop a layer of rust as they aged. In fact, these installation photographs from the object file show a lovely orange oxidation over the surface of the object in 1978—just two years after its completion! 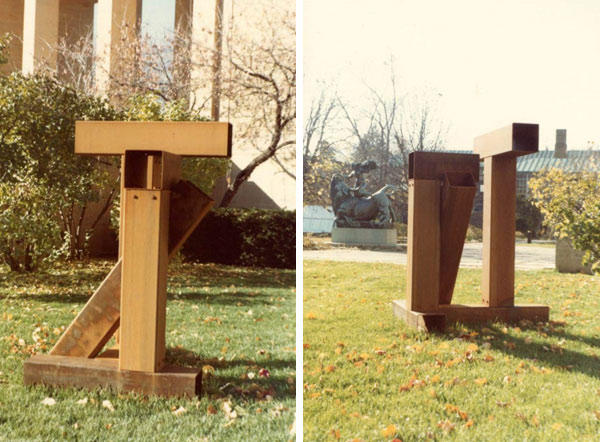 But by the middle of the 2000s, the deterioration of the steel at the sculpture’s base had begun to compromise its structural viability. In 2004, Gregory Wittkopp, Director of Cranbrook Art Museum, contacted Rosenthal to discuss best practices for conservation and preservation of his outdoor sculpture. The artist recommended a number of steps to conserve the work, including repair of the steel tubes followed by sandblasting, priming, and painting with industrial epoxy coating to preserve the steel. Enter Giorgio, a highly skilled sculptural conservator with over 25 years of experience, and voila—we have the first step in a repaired T-Square. 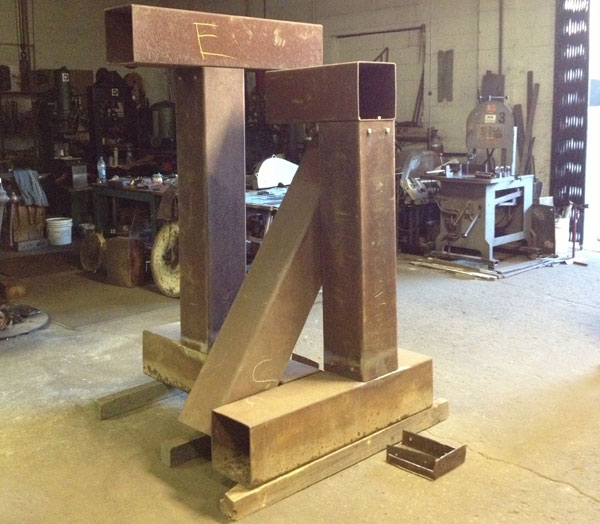 So far, Giorgio has refabricated interior brackets that had rusted through and reinforced the interior sidewall and other portions of the steel tubing. The next step: sandblasting the weathered surface so that the sealant can adhere. When all is said and done, T-Square can triumphantly return from Giorgio’s workshop—30-odd miles away—back to its home at Cranbrook, where it will rest atop a newly-poured concrete pad to protect it from pooling moisture. One of the potential sites for the sculpture is just outside my window here at the museum…perhaps one Monday morning at 9 a.m. in the not-too-distant future, I can look out my window with a mouth full of granola and smile, knowing that T-Square is in better shape than ever.