A Tale of Two Paintings – Cranbrook and the University of Michigan

At the Cranbrook Center for Collections and Research, we spend a lot of time thinking about ourselves.  That sounds self-centered, but it’s the nature of the job – we uncover connections between different areas of Cranbrook, building historical and cultural relationships that help us to better preserve Cranbrook history and shape its future.  Cranbrook doesn’t exist in a vacuum, though, which is why it’s important for us to take a step back and look at the larger Cranbrook connections out there in the world.   And really, what better place to start than 18th-century Canada?

I know that sounds crazy, but run with me on this.  In 1759 the British war hero General Wolfe was killed at the Battle of Quebec City on the Plains of Abraham, a battle which the British won.  Posthumously celebrated as one of the great British military leaders, General Wolfe and his heroic death were immortalized in both art and literature.  In 1770, the American expat artist Benjamin West tried his hand at the subject, painting The Death of General Wolfe.  Ultimately, that painting, and the five later versions also made by West, went on to become the iconic image of General Wolfe and a symbol of the British empire. 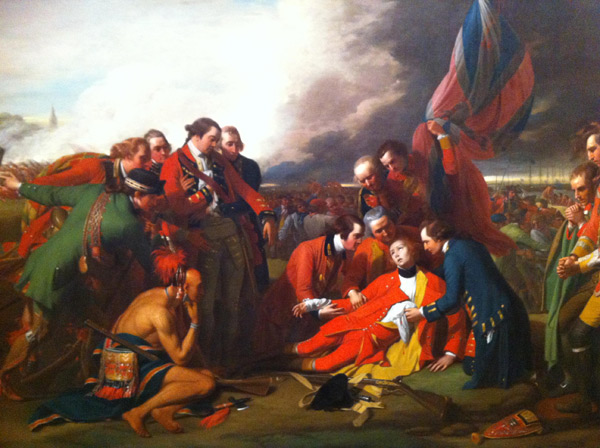 But what does this have to do with Cranbrook?  Well, in 1928 William L. Clements bought one of the six identified General Wolfes and donated it, along with his extensive library of early Americana, to the University of Michigan in order to build the William L. Clements Library.  In the same year, George Booth bought a version of The Death of General Wolfe on the understanding that it was also a Benjamin West.  Booth’s General Wolfe is very different from the other versions, however, and there has long been debate over whether the painting is actually a West.  Regardless of its origins, however, The Death of General Wolfe has hung in Cranbrook School for over 80 years. 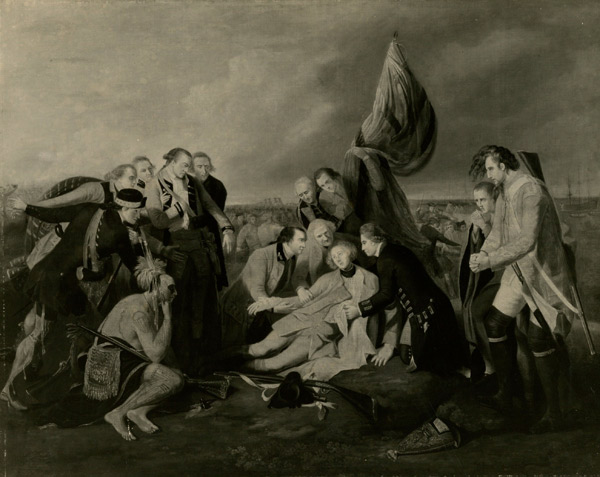 Fast forward to 2012 when the University of Michigan Museum of Art (UMMA) borrowed the Clements Library’s The Death of General Wolfe to showcase it in an incredible exhibition called Benjamin West: General Wolfe and the Art of Empire.  When the information about this exhibition came across a desk at the Cranbrook Center for Collections and Research, it was like a light-bulb went off.  Two versions of The Death of General Wolfe just 45 miles apart, each purchased in 1928 by avid collectors?  Could there be a more perfect Cranbrook connection?  And with that the Day Away program was born.

The Day Away program is about exploring Cranbrook connections with the wider world, and so on December 1st a group of Cranbrook enthusiasts spent the day immersing themselves in all things Wolfe and West.  We started the day at Cranbrook School’s Page Hall, where CS instructor Jeffrey Welch described the historical context for Booth’s acquisition of General Wolfe and I gave a brief overview of Benjamin West, providing a visual analysis of the features of both paintings. 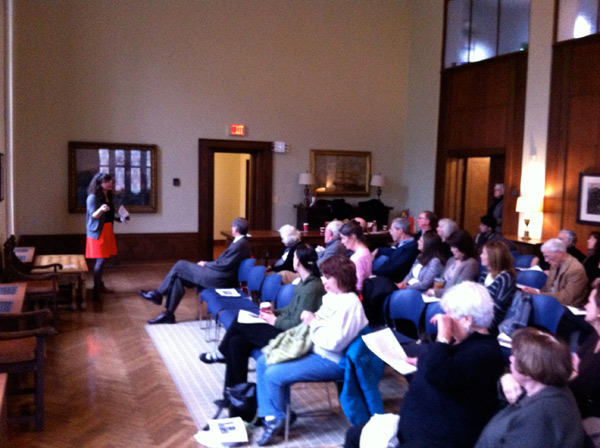 Day Away participants bravely gathering early in the morning for a brief lecture on West and Cranbrook at Page Hall.

From there we boarded a bus and drove to Ann Arbor.  At UMMA we were met by exhibition curator Carol McNamara, who took us through Benjamin West: General Wolfe and the Art of Empire.  Her masterful analysis integrated the painting into a constellation of objects that ranged from a lock of Wolfe’s hair to mundane household goods.  By examining the material culture related to General Wolfe, Carol was able to show how West’s painting became the defining image of the general, transforming him into a symbol for the newly formed British imperial identity and enshrining Wolfe within the pantheon of great British leaders. 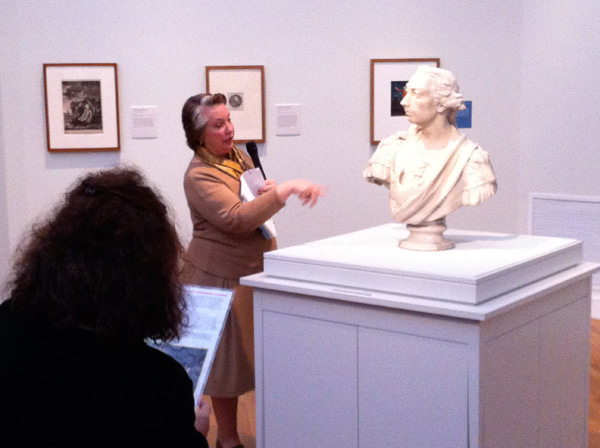 Following lunch at the Kelsey Museum of Archeology (where a few of us slipped away to catch a glimpse of the incredible Tiffany window installed in the Kelsey’s reading room) we finished our day at Clements Library.    Housed in an Albert Kahn-designed building that the architect described as his greatest achievement, the Clements is one of the worlds’ greatest repositories of early American written and printed material.  Director Kevin Graffagnino spoke with us about the history of the Clements and its future plans.  He set us loose on the library and even let us page through some of their treasures.   Not only did the visit further contextualize The Death of General Wolfe into the world of 18th century colonial politics, but it highlighted even greater the Cranbrook connections.  Here was a temple to history and learning, dreamt up by a passionate collector and designed by a great architect of the twentieth century.  Replace “early Americana” with “art and education” and you have Cranbrook in a nutshell. 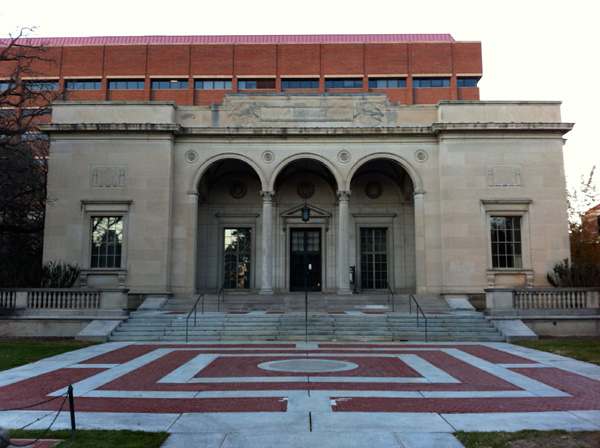 Alfred Kahn’s masterpiece, the William L. Clements Library at the University of Michigan.

With our time at the Clements coming to a close, we boarded the bus and headed back to Bloomfield Hills.  On the bus ride back we took an informal vote whether or not we thought Cranbrook’s General Wolfe was really a West.  As a group we decided that no, it probably wasn’t.  Still, we won’t know for sure until a West expert checks it out.  Even if the bus group is right, though, and Cranbrook’s Death of General Wolfe is not by West, we can still look at the painting hanging in Cranbrook’s Page Hall and see not only a history of 18th century British military heroism but also a record of Cranbrook connections that extend beyond the 319 acres of this campus far out into the world.