“Magic in the Museum” | Visit Detroit 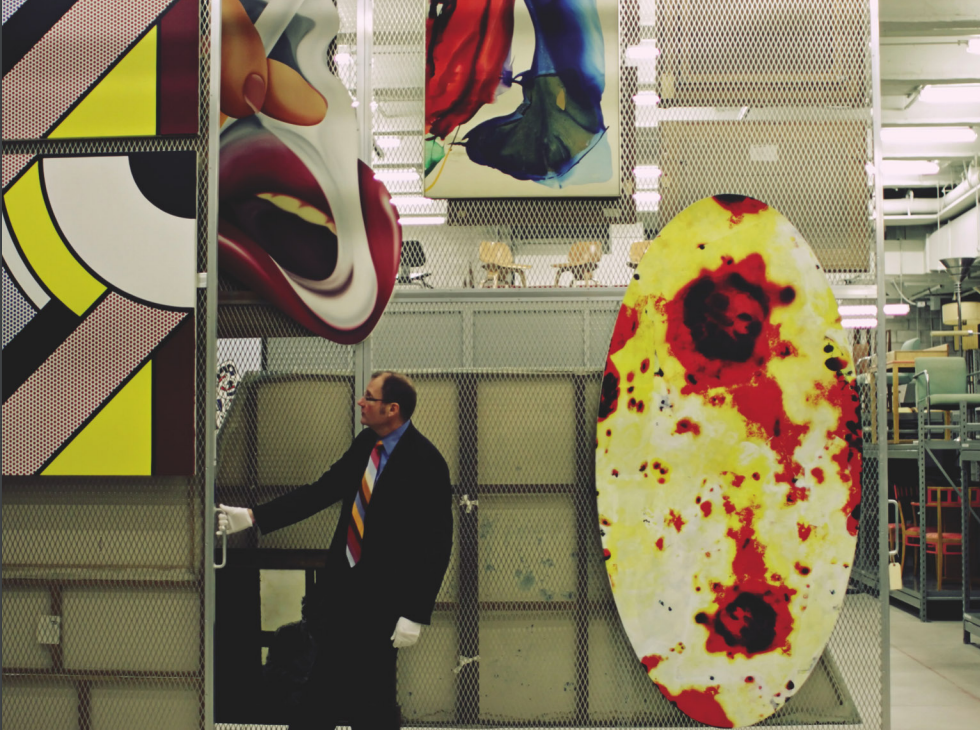 “It starts with this curious wall,” he said with a grin, punching in a code and sliding the steel mass to one side. We walk down a flight of stairs and down a long industriallooking hall filled with shipping crates, which hold the latest exhibit pieces that have arrived at the museum.

“This is one of the moments we hope has a little drama to it,” said Wittkopp, disappearing down a corner and fl ipping on a light switch to reveal a collection of Pewabic pottery from one of the nation’s oldest potteries, which happens to be located in Detroit.

Welcome to the vault of the museum where, for the first time, everyone is welcome.

Backstage Pass
These little surprising moments, in which the visitor receives a backstage pass to what normally is hidden from view in the Bloomfield Hills art museum, is part of Cranbrook’s $22-million renovation of its Collections Wing.

Along with a top-down overhaul that restored the museum’s original 1942 coffered ceiling lighting system and included state-ofthe-art climate control, planners wanted to give the average visitor more access to all the things that museums normally keep tucked away when they aren’t on display.

It was an instance of seizing an opportunity to create a public space that arose out of a dire need to implement proper storage conditions. When the building originally opened, it didn’t feature “a single closet for storing a piece of art,” the museum director told us.

Campus lore holds that Cranbrook founder George Booth would simply store artwork in his house when it wasn’t on display in the art museum.

Wittkopp hopes that the renovation has not only remedied the storage issue, but has also achieved his intention to “institutionalize the ‘wow factor.’” Forget the era of digital touchscreens and the latest flavor of museum pageantry — Wittkopp says that the experience of being in a beautiful space where the “attractions” speak for themselves will create a special memory that resonates with even the youngest patrons. He remembers the excitement of being in grade school and visiting a museum for the first time, and he wants to capitalize on that.

“We wondered, ‘can we create this space that just captures the imagination of people?’” he added.

On tour, we are traveling on an elevator large enough to house a car. The doors open to reveal even more treasures.

Curated Curriculum
Wittkopp, who is tapped to speak to potential donors and art aficionados, said he’s often heard from collectors who bemoan the fact that their donations to major museums sit unappreciated in back storage rooms for decades while waiting for their rare appearance on exhibit.

“There’s absolutely nobody who’s inviting 30 third graders from the city of Detroit into their vault,” Wittkopp said as he studied the Sepeshy collection featuring glimpses of Detroit in the 1940s.

Here, those third graders can pull up a stool and sit nose-to-nose with their “curriculum.”

And Wittkopp believes he now has a better answer for would-be museum donors. “Even when [these artifacts] are in storage they have a life,” he said. “It’s actually, in many respects, more exciting. This has captured the imagination.”

The tour winds through the Collections Seminar Room, off of which an archive houses original prints from the likes of, “Oh … let’s see … this one says ‘Bertoia.’” As in, Bertoia-comma-Harry, noted 20th-century artist, sculptor and designer who once studied and taught at Cranbrook. Wittkopp whisks out two monoprints, which, he explained, were Bertoia’s attempts to visualize sound. The monoprints (by definition, one-of-a-kind pieces) are part of one of the largest collections of its kind — Cranbrook owns 72.

“Every box, every print in here has a comparable story,” he said, admiring the colorful, orbital print before tucking it back into its box and replacing it on the shelf among hundreds of others.

Staying True to Form
Frequent museumgoers to Cranbrook might be surprised that they won’t immediately detect a complete overhaul to Eliel Saarinen’s original genius architectural design — and that’s kind of the point.

The team from Detroit firm SmithGroup that worked on the 20,000-square-foot addition was “very respectful of Saarinen’s design,” said Wittkopp. “It doesn’t scream at you. It allows Saarinen’s building to take center stage.”

Charles Di Piazza, a visitor from Austin, Texas, was appreciative of the enhancements. “I think it’s very successful,” said Di Piazza, an architect himself. “It’s light, big and airy. You don’t need to step into a small space to see the exhibits. A visitor can create his or her own path.”

You get the sense that Saarinen, along with all of the men and women whose paths have crossed through Cranbrook long ago, would be proud.