I thought I was on vacation.

Over the recent holiday, I spent a glorious week in New York City, where I had lived for three years before accepting my position at Cranbrook. During my stay, I caught up with good friends and former colleagues, revisited old stomping grounds, and reconnected with important burritos of my past (El Centro in Hell’s Kitchen). Of course, as a museum professional and art historian, I also reveled in the sheer breadth of art experiences available to denizens of Gotham. At Ann Hamilton’s installation at the Park Armory, I swung on a giant swing in the company of pigeons and robed monklike actors. At the divine Ferdinand Hodler show at Neue Galerie, I faced the artist’s unflinching, obsessive portraits of his dying lover and muse. And at the Rosemarie Trockel retrospective at the New Museum, I stood slack-jawed in a white-tiled room with a faux palm tree sprouting from the ceiling while motorized birds chirped and whirred, mocking me from a nearby cage.

Heady stuff. So heady, in fact, that I needed a moment of fresh air, and luckily, the New Museum’s Sky Room on the seventh floor offers stunning views of lower Manhattan from a narrow terrace on the south and east sides of the building: 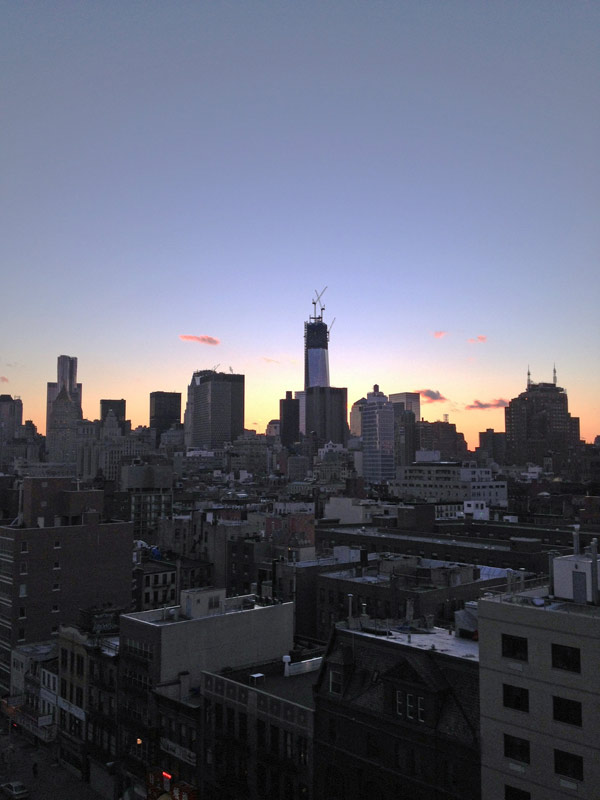 I snapped this picture, undoubtedly like many of the other art tourists around me, with the intent of manipulating it later in Instagram, hopefully inspiring of deluge of “likes.” But as I reviewed the photograph from the comfort of my friend’s couch, I became curious about the Freedom Tower, the building under construction at the center of the photo. I fired up Wikipedia, and lo and behold: hundreds of miles and a holiday away from Cranbrook’s campus, the institution managed to elbow its way into the very center of my touristy snapshot.

Daniel Libeskind, the famed architect who won the competition to design the master plan to rebuild the World Trade Center site, served as the Artist-in-Residence in the Architecture department at Cranbrook Academy of Art from 1978-1985. (Other architects designed the individual buildings within the plan; David Childs of Skidmore, Owings, and Merrill designed the Tower itself, though Libeskind chose its height of 1,776 feet.) Libeskind’s tenure at Cranbrook, which preceded the completion of his first building, might be understood as foundational to the development of his design ideas. While he was here, the architect worked closely with Katherine and Michael McCoy, the Artists-in-Residence in the Design department who pioneered the so-called “semantic” approach to design. Elements of this approach, which relies on metaphorical links as a method to solve design problems, extend throughout the architect’s most famous commissions—including the one at the heart of my photo.