I love Cranbrook’s impressive history of 20th century art and design, but sometimes a girl needs to revisit her roots in the 18th century.  It was with that in mind that I went out to New York’s Americana Week at the end of January.  For fans of 18th and 19th century American decorative arts, Americana Week is like Woodstock.  Auction viewings followed by thrilling sales, museum exhibitions devoted to “brown furniture” or master craftspeople, and of course, the Winter Antiques Show at the Park Avenue Armory, where dealers, collectors, and academics gather to see the historical treasures that have resurfaced in the past few years.

This year was my second time at the Winter Antiques Show and I was looking forward to connecting with old friends, both human and furniture (I’m looking at you, 18th century japanned high chests).   I figured I’d be leaving Cranbrook behind for the weekend, but what I stumbled upon instead was a Paul Evans Moment. 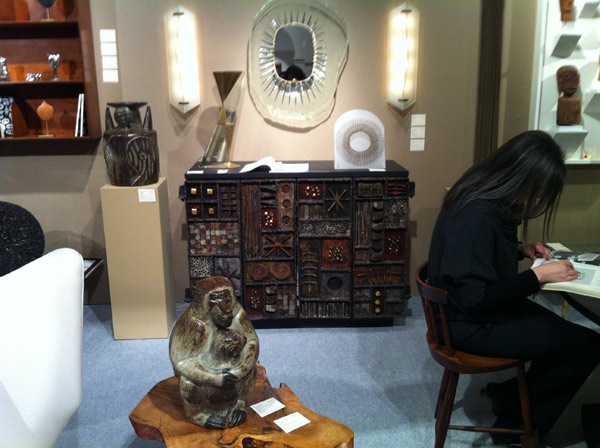 A Cranbrook Academy of Art student in 1952, Paul Evans crossed boundaries between modern design and historic craftsmanship when he went to work as a craftsman at the living history museum Old Sturbridge Village.  Evans created enormous, heavily-decorated furniture pieces that showcased his metalsmithing skills while blurring the lines between functional and sculptural in industrial design.

In fall of 2013 the James A. Michener Art Museum will be staging a retrospective of Evans’ work, after which Cranbrook will play host to the exhibition.  As the museum gets into the swing of exhibition planning for the coming year, Paul Evans is the talk of the office.  So while I’d totally expect a Paul Evans encounter at Cranbrook, running into him surrounded by Queen Anne chairs and 18th century samplers was a surprise.

After I got over my initial shock, however, it suddenly made sense to see Paul Evans at the Armory.  As we begin to take a longer historical look at the twentieth century, there is something meaningful about contextualizing Evans within the history of American craftspeople.   The Winter Antiques Show is all about examining and celebrating the objects made by talented artisans over the course of three centuries, and Evans’ work situates him right smack dab in the middle of that.  His tools may have been welding equipment rather than awls and hand saws, but Paul Evans is yet another story in this long tradition of people producing “stuff” that blurs distinctions between beauty and functionality and of creating art that can be used in the most immediate of ways.