A Road Trip by Design, Part 1

I love a good road trip. Chintzy roadside attractions, late-night caffeine stops, full-blast radio singing—I’m quite at home behind the wheel at 65 MPH. Road trips satisfy my compulsion to wander while feeding my admiration of classic American kitsch. My recent talk at the Kentucky Museum of Art and Craft provided the perfect excuse for a meandering journey from Michigan to Kentucky in my trusty ’91 Toyota Camry. At the behest of our preparator extraordinaire and resident design nerd Mark Baker, I scheduled a stop in Columbus, Indiana on the way down. Why Columbus, you might ask? The answers are so awesome and numerous that they require two blog posts.

The first, and perhaps awesomest, is Eero Saarinen’s Miller House. Eero completed a relatively small number of residential commissions in his lifetime; Miller House certainly counts among the most remarkable of these. Check out these views: 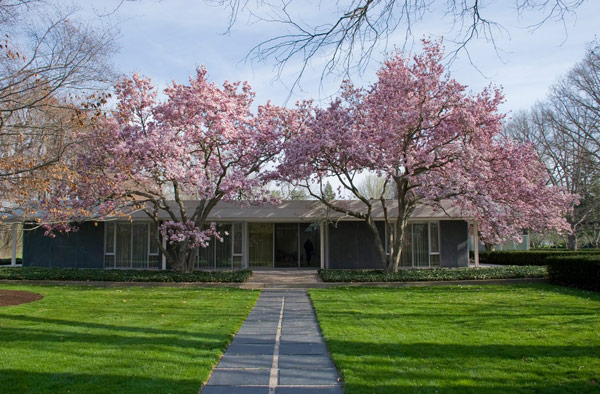 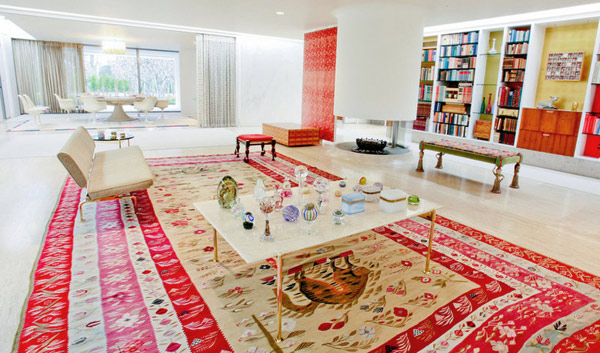 Industrialist J. Irwin Miller, perhaps one of the greatest American architectural patrons of the 20th century, commissioned the home from Saarinen in 1953. Miller’s belief in the power of good architecture to set the public mood inspired him to offer to pay all the architect’s fees for public buildings in Columbus. As a result, the 45,000 residents of this town enjoy world-class facilities built by veritable giants in post-war architecture including I.M. Pei, Robert Venturi, Richard Meier, Harry Weese, and Gunnar Birkerts among many others. But it was Eero whom Miller chose to design his personal residence.

Often considered classically Modernist in its open plan, reduction of ornament, and use of steel and glass, Miller House in fact reminded me of another famous residence back on Cranbrook’s campus in Bloomfield Hills: Eliel Saarinen’s 1930 art deco masterpiece Saarinen House. Compare the dining rooms, for instance: 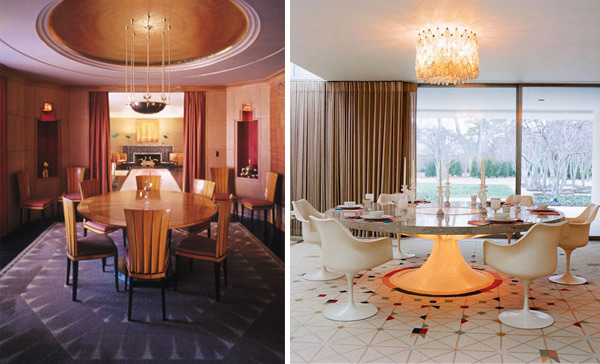 In its circular format, emphasis on spatial relationship in horizontal and vertical planes, and attention to unification between decorative and structural elements, Eero’s dining room directly recalls that of his father. Of course, Miller House’s overall palette and interior décor—conceived by modern master Alexander Girard—radically differs from the warm tones favored by Eliel and his wife Loja, who designed the textiles for the home.

Stay tuned for part two of my road trip…where did it take me next?