Chicago: On Beans and Dumplings

I spent the recent Memorial Day holiday in the Chicago area, seeing several awesome things for the first time: the Bean, Mies van der Rohe’s Farnsworth House, and the Art Institute of Chicago among many others. As I traipsed through Millennium Park on my way to the AIC, frankly giddy at the prospect of viewing Grant Wood’s American Gothic, I stopped cold in my tracks, captivated by a series of large-scale ceramic sculptures that looked vaguely like giant ice-cream pops. 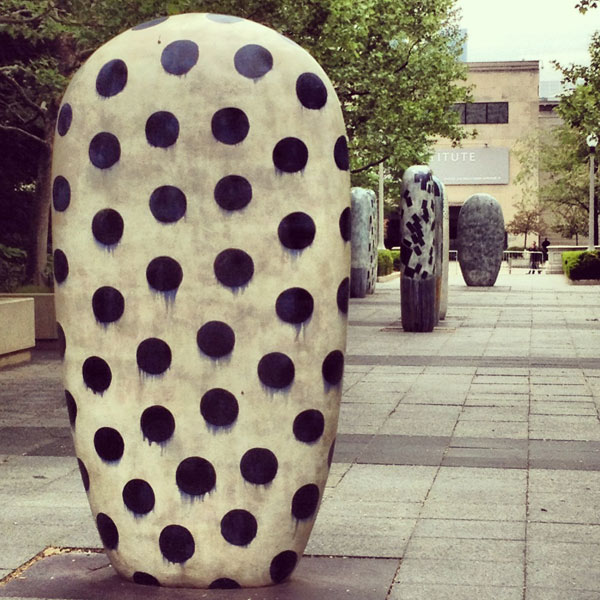 Thinking that perhaps these were the work of famed Cranbrook alum Toshiko Takaezu, I hopped the metal barrier to snap a couple of pictures (the open-air exhibition was closed that day for some reason; in the far distance of the image above, you can see the figure of the guard who yelled at me). The surfaces of the ceramic forms undulated with repeating pattern and variegated glazing. They were—in a word—scrumptious.

As I approached the sculpture—and before I was shooed away by the guard—I read on the exhibition placard that the work was not by Takaezu, but rather by another Cranbrook ceramic artist of note: Jun Kaneko, who served as Artist-in-Residence and Head of the Department of Ceramics from 1979 until 1986. Kaneko’s work often uses pattern, repetition, and surface painting to achieve effects that imply conceptual endlessness. The artist calls these outsized sculptural works Dango, meaning “dumpling” or “rounded form” in Japanese. Such an idiom positions Kaneko in a long line of ceramic artists at Cranbrook who pushed the medium to new heights of sculptural achievement, from Maija Grotell to Takaezu and continuing through to current Artist-in-Residence Anders Ruhwald, whose exhibition in Saarinen House is now on view. Kaneko’s alien-yet-familiar forms, echoing both the organic line of the Bean and the repetition of the Chicago architecture, reminded me once again that even far afield, Cranbrook’s always just around the corner. 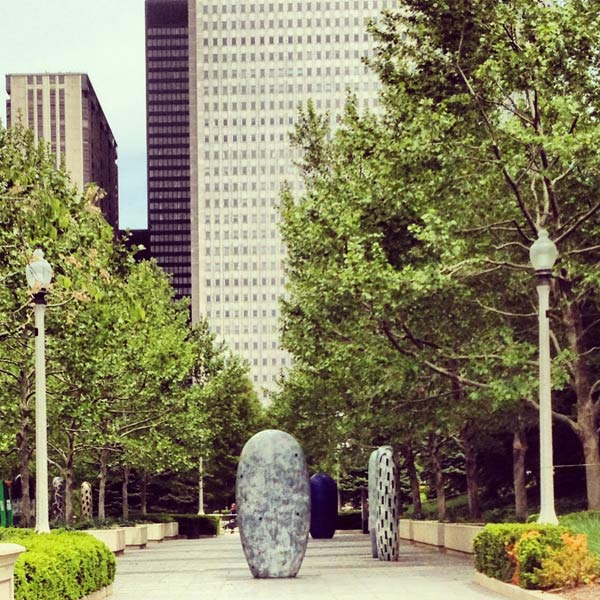