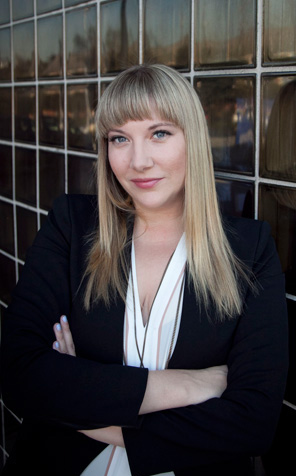 Bloomfield Hills, Mich., Nov. 21, 2013 – Cranbrook Art Museum is pleased to announce the appointment of Laura Mott as Cranbrook’s new Curator of Contemporary Art and Design. Mott will be responsible for the Art Museum’s exhibition programs as well as the development and presentation of its collection of modern and contemporary art, architecture, and design.

“Laura is an artist’s curator,” says Gregory Wittkopp, Director of Cranbrook Art Museum and the Cranbrook Center for Collections and Research. “She is a professional for whom working directly with artists and the objects they make is at the core of her work.”

Wittkopp continues, “With an innovative curatorial practice that has been based in both the United States and Europe, Mott’s exhibitions and writing have demonstrated her ability to actively engage the public with the work of an impressive range of contemporary artists, architects, musicians, and choreographers.”

Mott began her career in New York working with curator Lawrence Rinder on the Whitney Museum of American Art’s 2002 Biennial exhibition and publication, followed by experience in the commercial art world at the Peter Freeman gallery in New York. After attending graduate school at the Center for Curatorial Studies at Bard College, Mott then moved to San Francisco where she served as the Curator/Assistant Director of Mission 17, a not-for-profit institution. Among other projects, she oversaw Mission 17’s Visual/Cultural Criticism Residency, as well as a curatorial internship and lecture program.

In 2009, Mott moved to Sweden where she was the Curator of Exhibitions at the University of Gothenburg’s Valand Academy. During her three years there, she worked closely with undergraduate, graduate, and doctoral students in the fine arts department and developed an ambitious exhibition program for the university’s Galleri Rotor, establishing it as one of Gothenburg’s premier spaces for contemporary art. She also was part of the team than ran the Valand Artistic Research Centre’s artists-in-residence program, and organized and hosted a series of weekly lectures and academic seminars.

During her tenure at the Valand Academy, Mott also served as an interim Curator at the Gothenburg Konsthall, where she curated the seminal exhibition Everything Under Heaven is Total Chaos by the artists’ collective International Festival, and was a Guest Producer/Curator at Iaspis, an international artists residency program in Stockholm.

Mott taught several courses on exhibition-making at Valand Academy, and served as a guest lecturer at the university’s School of Photography and School of Design and Craft, as well as Dômens Art Academy in Gothenburg, the Institute of Contemporary Art in Moscow, and the Academy of Fine Arts in Prague, where she conceived and taught the seminar The Life of an Artwork: From Idea to Extinction.

For a high resolution photo of Mott, please contact Julie Fracker at jfracker@cranbrook.edu.