My Brain Is In My Inkstand 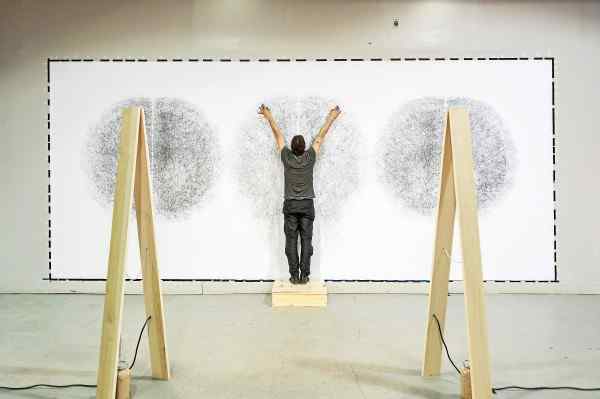 by Stephanie Preweda, The Oakland Press

Cranbrook Institute of Art combines the two in its upcoming exhibit, “My Brain Is in My Inkstand: Drawing as Thinking and Process,” curated by Nina Samuel.

An exhibit in New York, “The Islands of Benoit Mandelbrot,” also curated by Samuel, inspired Cranbrook Art Museum Director Gregory Wittkopp to demonstrate the process of thinking with contemporary art. Mandelbrot, who died in 2010, was a mathematician who used images called “fractal geometry” to explain his works.

“This exhibition is about the role that drawing and images play in the process of scientific thought,” Wittkopp said.
With 22 artists from around the world, the exhibit combines two different concepts to create contemporary artwork. It includes the works of biologists, philosophers, mathematics and more to get a sense of how drawing is an activity between thought and action.

Chicago artist Tony Orrico will have a live demonstration Nov. 16-17 in which he explores the movements of his body and creates a drawing. Wittkopp said Orrico will have his back to the wall and try to create a drawing with just his brain and previsualize the image. The drawing will remain in the show for the duration of the exhibit.

Wittkopp said this exhibition is not about the finished product of a drawing but “about that messy period in between, where drawings were making marks on paper is integral to process of thinking through an idea.”

Posted In: Cranbrook Art Museum in the News, My Brain Is In My Inkstand