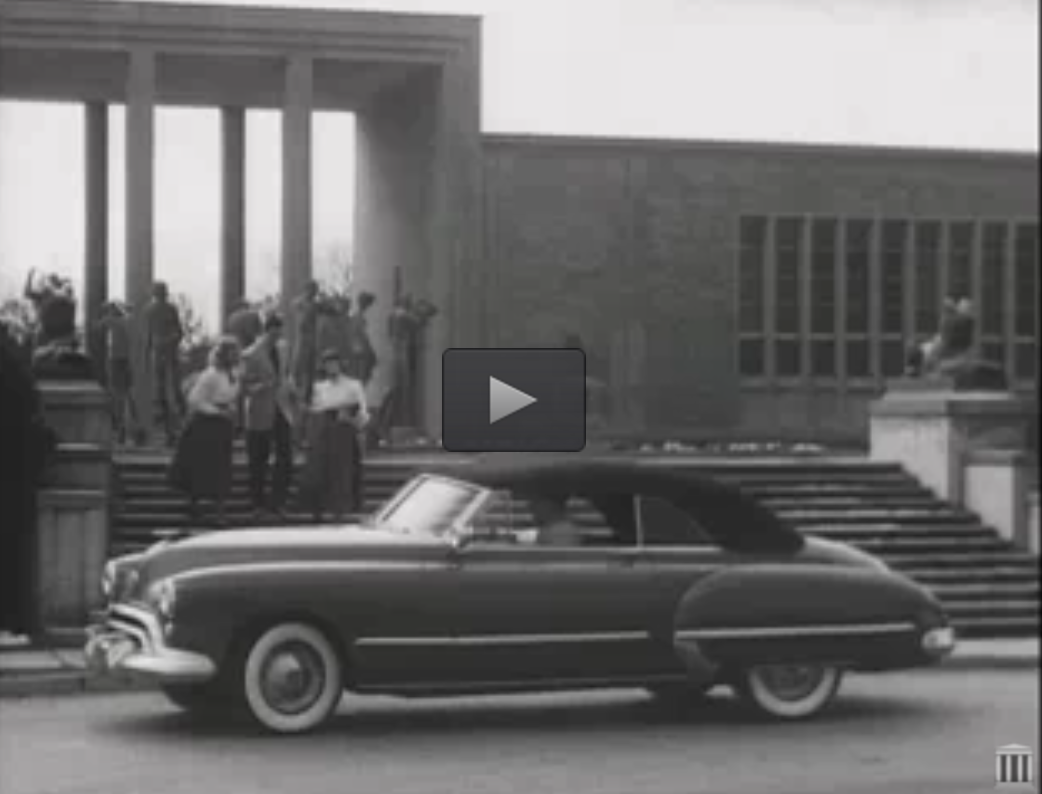 There are few things that history buffs love more than archives, and there is almost no archive that can rival—digitally at least—the Internet Archive for sheer volume and accessibility. Looking for a late 19th-century trade catalogue for a New York lantern company? They probably have that.  Interested in Princeton University’s 1886 Scientific Expedition? Well, read all about it. What about former First Lady Eleanor Roosevelt’s visit to Morocco in 1957? Enjoy!

Every once in a while, though, a researcher comes upon a treasure that feels strangely personal. That is exactly what happened when I was bumming around on the Internet Archive and stumbled upon this compilation of 1948 Oldsmobile “Minute Movies.” This blog is all about Cranbrook sightings off-campus; places where Cranbrook-related artists and makers have put their mark on the world. This sighting, though, is of historic Cranbrook in a digital world. Starting at the 0:53 second mark, the film Ahead Automatically features a suspiciously familiar backdrop: the Cranbrook Art Museum and Library peristyle. Carl Milles’s Orpheus Fountain is front and center as the attractive young actors ooh and ah over their friend’s “Futuramic” Oldsmobile.

In the middle of the twentieth century, Cranbrook’s bucolic campus was the ideal setting for automobile advertisements. Geographically close to the office parks and factories of the Big Three automakers, it looked worlds apart from the urban and industrialized landscape of the Detroit metro area.  For an automaker selling a lifestyle as well as a car, there were few places that said “lifestyle” quite as well as Cranbrook. Dotted with Eliel Saarinen’s architecture and Milles’s sculpture, Cranbrook’s campus became synonymous with a certain perspective on the world: youthful, engaged with art and culture, and forward-looking—all ideal qualities for the owner of a “Futuramic” Oldsmobile.

Eagle eyed viewers might notice that the house that appears in the first segment of the video is also familiar. We’re pretty sure that is the Affleck House, a Frank Lloyd Wright gem of a home built in Bloomfield Hills and operated as a historic house museum by Lawrence Technological University.

The story of Cranbrook and car goes deeper than simply advertisements. In March Cranbrook Art Museum and the Cranbrook Center for Collections and Research will partner with the Bloomfield Hills Township Library to present a talk on Cranbrook’s automotive connections. Sponsored in conjunction with the current exhibition A Driving Force: Cranbrook and the Car, this lecture will tell the story of Cranbrook Academy of Art graduates who worked in the automobile industry at the midcentury. For more information, visit the Bloomfield Hills Township Library.