From this gusty tundra of unrelenting frigidity (-20 degrees with windchill today!), we here at Cranbrook Art Museum would like to extend our warmest and most heartfelt congratulations to Catherine Murphy, the 2013 winner of the Robert De Niro, Sr., Prize, awarded to one outstanding mid-career artist each year. Since the 1960s, Murphy’s representational paintings have been widely exhibited and prolifically produced, but the artist’s talent for nuanced channels of perception remains at times underappreciated. 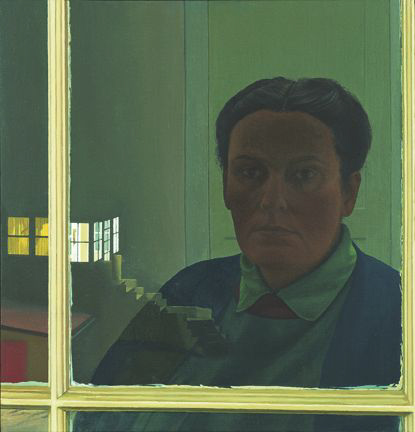 Cranbrook Art Musum holds Murphy’s Nighttime Self-Portrait (1985) in its permanent collection, acquired as part of a generous gift of contemporary paintings and sculpture from the Collection of Dr. John and Rose M. Shuey in 2001. The Shueys were principally drawn to abstraction during their many decades of collecting, but the somber power of Murphy’s Nighttime so deeply enthralls, it is no wonder they made an exception for this piece. (And, when pressed, Rose Shuey told museum director Gregory Wittkopp that this painting was one of her personal favorites). Confronting the roles of observation and audience, Murphy’s own darkened countenance is captured within a window reflection, conflating the positions of both artist and viewer. Hidden behind a window mullion, a fracture in elevation between the porch and the front of the house subtly reveals the passing of time. Here Murphy challenges the immediacy of the captured image and highlights the minute variables in every mode of awareness.

Personally, I delight in Murphy’s work from the 1980s for its inquisitiveness of perspective and examination of the ordinary. With a quality reminiscent of Vilhelm Hammershøi’s haunting domestic vignettes, her glances up stairwells and through windows and doors are muted in tone and both meticulous and hazy, evoking the dreamy disquiet of a vivid memory. As Linda Nochlin has noted, Murphy’s paintings are “charged with a very contemporary awareness of the ambiguities of the domestic, of the ways, both dramatic and subtle, that the known shades into the mysterious, the personal into the objective, the cozy in to the uncanny.”

Bravo, Ms. Murphy! We are so thrilled for you, and look forward to many more years of enchanting artistic output.