A day late but with no less affection, we here at the Cranbrook Art Museum wish a very happy birthday to Albert Herter, born on March 2, 1871. The son of Christian Herter, one half of New York’s famed Herter Brothers design and decorating firm, Albert went on to become a successful artist and decorator in his own right. Over his lengthy career he painted portraits of the Bouviers, executed many private and civic murals in the United States and Europe, opened and decorated an exclusive Montecito hotel for America’s elite, and in 1908 founded the Herter Looms weaving company.

Although Herter Looms manufactured a variety of textiles for home furnishings, it is perhaps best known for its output of revivalist tapestries, often designed by Albert. Below is an essay about Herter’s The Great Crusade tapestry, written by former Cranbrook Academy of Art director Gerhardt Knodel for the 2004 publication Cranbrook Art Museum: 100 Treasures. For even more about the tapestry’s design and execution, check out Robbie Terman’s post on our sister blog, Cranbrook Kitchen Sink. 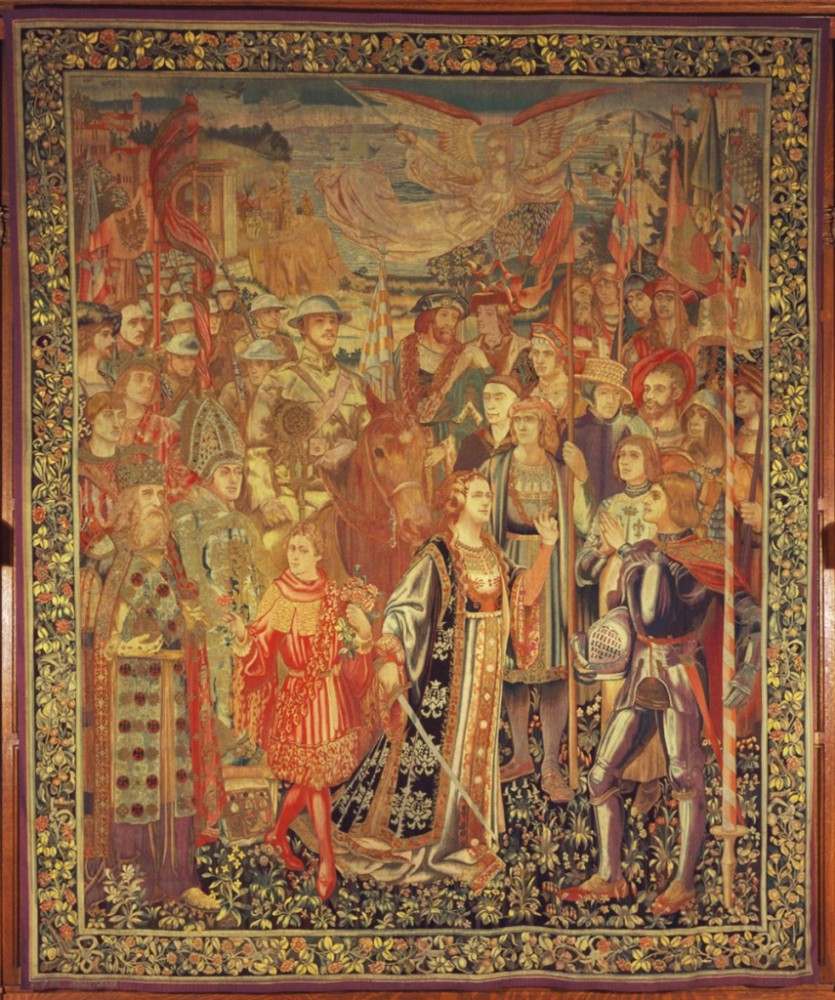 [Cranbrook founder] George Booth was inspired to mark the end of the World War I in 1918 with a commemorative tapestry designed in the European tradition. His pen and ink sketch was submitted to renowned designer Albert Herter in New York City, who developed Booth’s concept and oversaw the work’s production by the Herter Looms in 1920. The resulting tapestry is beautiful, unique, and dense with political symbolism.

Since the Middle Ages, tapestries functioned as a means to document and glorify the “progress” of civilization. The Great Crusade presents America, whose involvement in the battlefields brought the war to an end, as the savior of European culture. The tapestry depicts the great political and religious leaders of Europe’s cultural past standing on the ground (Henry VIII, Francis I, Joan of Arc, among others) welcoming the triumphant victor, General Pershing on horseback, leading his troops. A Renaissance-style angel of victory is suspended in the sky above the crowd, accompanied by American bi-planes, the first ever used in warfare. The tapestry is a “red-carpet” homage to the victors.