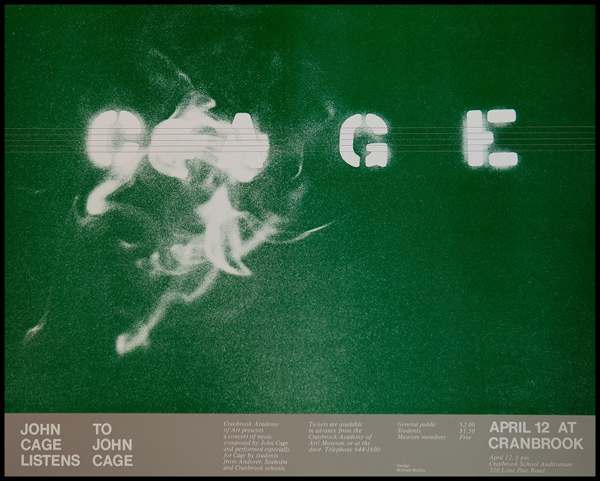 In early April of 1974, artist-composer John Cage traveled to Cranbrook to celebrate the opening of Music–Mushrooms–Manuscripts at the Art Museum, an exhibition of his drawings, photographs, books, poems, prints, and sound recordings. Featured works included his 1969 series of Plexigrams, Not Wanting to Say Anything About Marcel, and the Mushroom Book, both printed by Irwin Hollander (1973-1975 head of the Cranbrook Academy of Art Printmaking department). On the evening of April 12, Cage attended a concert of his own music—aptly titled “John Cage Listens to John Cage”—performed by local musicians as well as students from the Cranbrook Upper School and neighboring Andover and Seaholm high schools. The program featured a 35-piece ensemble of brass, string, woodwind, and non-pitched percussion instruments for the performance of Atlas Eclipticalis, executed in unison with the multi-piano composition Winter Music. Other works included Variations IV, 4’33”, 0’00”, and Prelude for Meditation, the latter representing his earlier compositions exploring ambient noise and prepared piano. The entire evening was conducted by a seventeen-year-old Steve Tennent, who had just graduated from high school four months earlier, and a promotional poster was designed by co-head of the Cranbrook Academy of Art Design department, Michael McCoy. 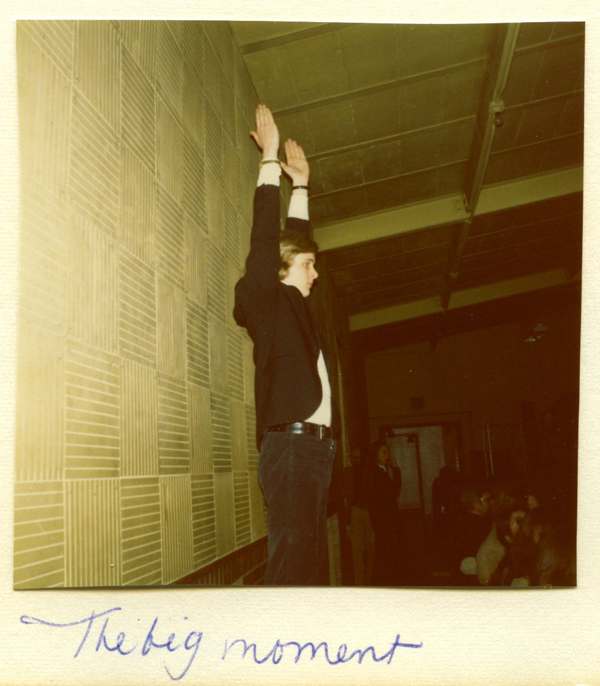 During his week-long visit to the Academy, Cage also performed a 2 ½ hour long excerpt from Empty Words, a text composition he would not complete until the following year. What one reviewer deemed a “metaphysical ode to extemporania,” the work comprised of drawings as well as phrases, words, and sounds randomly culled from the Journal of Henry David Thoreau. 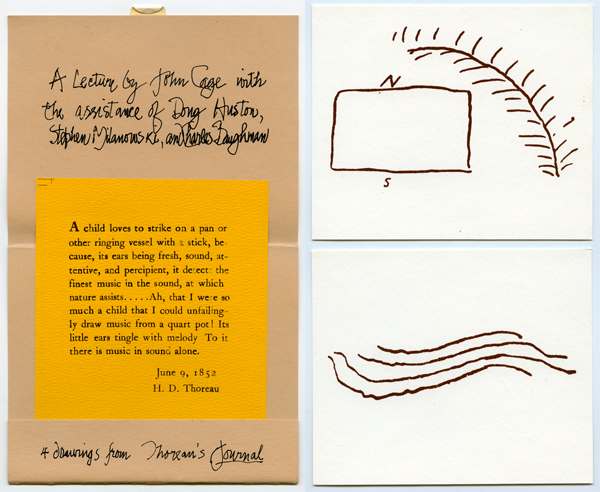 Cage spent much of his time at Cranbrook with Irwin Hollander’s Printmaking students, playing chess and conversing but holding no formal critiques. At some point, the “Cage Bag” project materialized, spearheaded by Printmaking students Chuck Baughman and Doug Huston. A suite of droll and imaginative prints–including a program for the concert performance and limited edition postcards–were tucked into white paper bags silk-screened with Cage’s face. 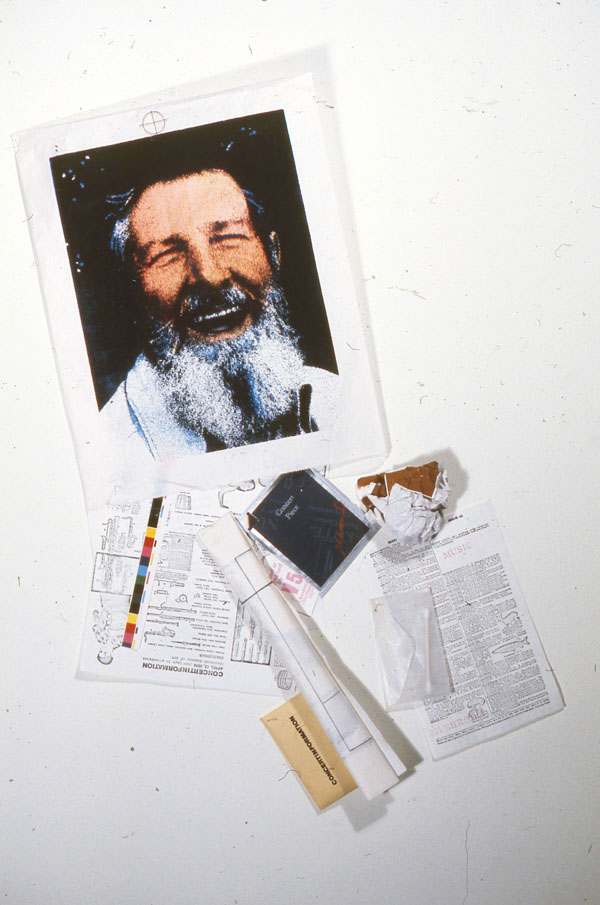 The Cage Bag and its contents. Photo by Doug Huston. 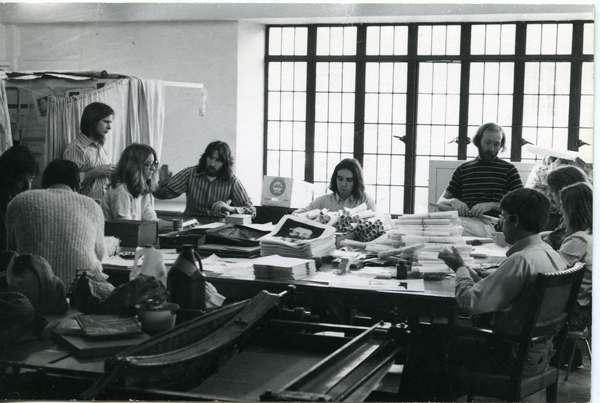 Students assembling the Cage Bag. Kim Rendleman (MFA Printmaking ’74) is sitting at the end of the table on the left, with Doug Huston (MFA Printmaking ’75) to her right and Stephen Milanowski (BFA Photography ’78) standing behind her. John Cage can be seen at the left edge of the photograph, engrossed in a game of chess with a student (or possibly Irwin Hollander). Photo courtesy Doug Huston. 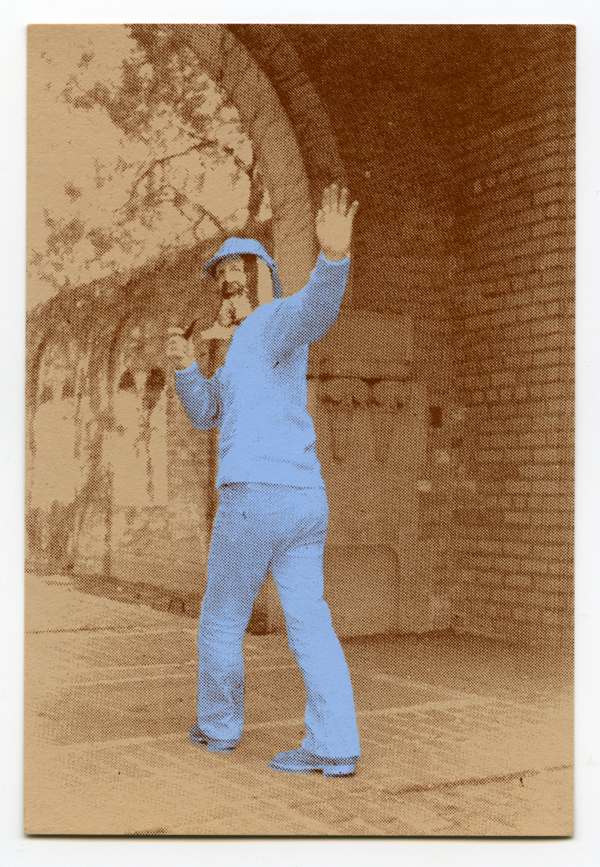 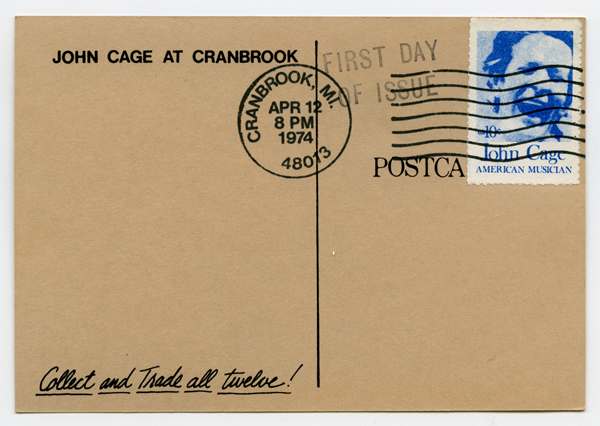 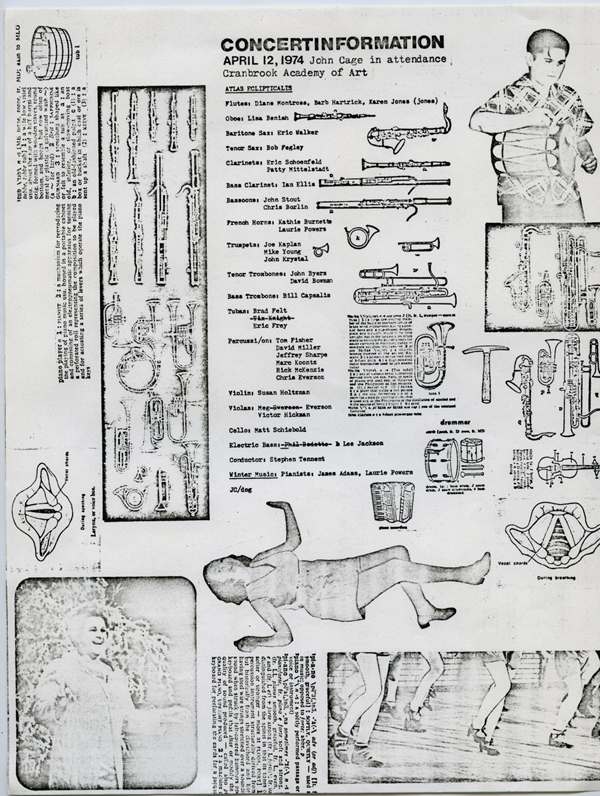 The Cage Bags were distributed to the audience on the evening of the “John Cage Listens to John Cage” performance, with the goal to have everyone in attendance wear the bags over their heads, creating a sea of John Cages staring back at the stage. Convincing listeners to participate proved a fruitless venture, but the night was capped off by two streakers masked in Cage Bags running through the gym and improvising a keyboard piece for Variations IV. 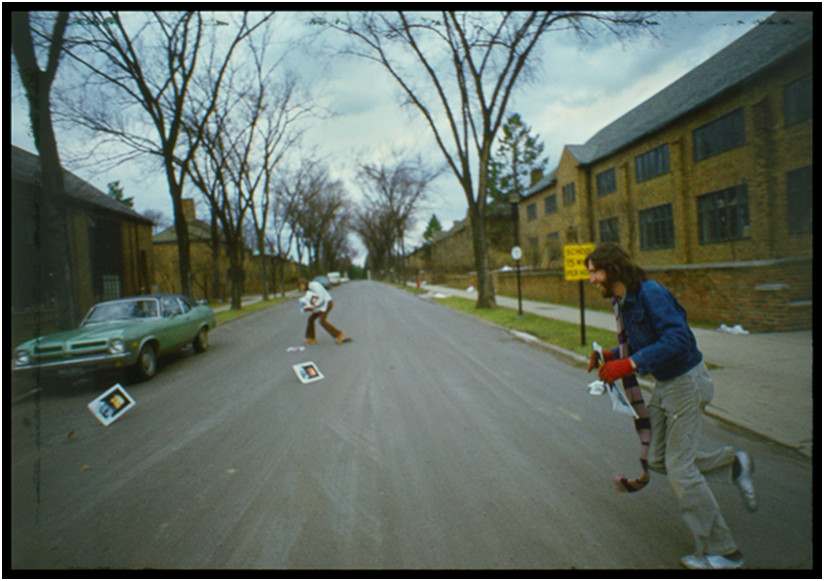 At 4pm on Sunday, March 23, I’ll be lecturing more on John Cage’s visit to Cranbrook, as well as discussing Mushroom Book and Sounds of Venice, two Cage works currently on display in the Cranbrook Art Museum exhibition My Brain Is in My Inkstand: Drawing as Thinking and Process. Immediately following will be a performance of Sounds of Venice by Detroit musician and composer Joel Peterson (check out his amazing gallery/restaurant/performance space Trinosophes, across from Eastern Market). Special thanks go out to Steve Tennent, Stephen Milanowski and Doug Huston, who provided so many incredible photographs and memories from that week. And if you haven’t yet seen My Brain Is in My Inkstand, be sure to catch it soon–the exhibition closes on March 30!