You may remember this past spring when my colleague, Shoshana Resnikoff, wrote a blog post about May Morris’s Bed Hangings in celebration of her birthday. Well today on the blog we take a look at her father, William Morris (1834–1896), designer, poet, novelist, socialist, translator of Icelandic sagas(!), and all-around creative visionary who shaped the Arts and Crafts movement in England and its many iterations throughout Europe and the United States. 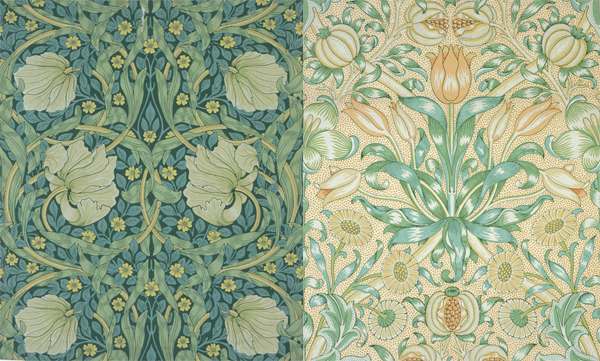 Morris despised the cheap, mass-manufactured goods and deteriorating social and labor conditions that characterized England after the Industrial Revolution, and reverted back to medieval visual language and production techniques in his art and design work as a nostalgic memorial to simpler times. Perhaps best known for his wallpaper designs of the late-nineteenth century, each roll was made by hand in a long and painstaking woodblock printing process (imagine lining up each carved woodblock to match the edge of each stamp that preceded it, not to mention using a different block for every color on the paper!). Each piece is inspired by–but an abstraction of–natural flora, and Morris described this impulse as such:

“Is it not better to be reminded however simply of the close vine trellises which keep out the sun … or of the many-flowered meadows of Picardy … than having to count day after day a few sham-real houghs and flowers, casting sham-real shadows on your walls, with little hint of any-thing beyond Covent Garden in them?’
–William Morris, “The Lesser Arts,” in Hopes and Fears About Art, 1882.

Cranbrook Art Museum holds seventy-two wallpaper samples in its collection, which were donated by Mrs. Olive Hansen in 1991. Peter Heinrich Hansen, Mrs. Hansen’s father-in-law, was a German immigrant who in 1904 was hired as a designer-draftsman by none other than Gustav Stickley, one of the American Craftsman style’s greatest furniture makers (and like Morris, an ardent socialist). When Hansen and his wife Ruth, who herself worked for Stickley as an architectural draftsman, were redecorating their home in upstate New York, they ordered wallpaper samples of every pattern made by Morris & Company–the design firm founded by William Morris–and never threw them away.

You can read more about the design, implementation, and social context of William Morris’s wallpapers on the Victoria and Albert Museum website. And for more on Morris’s influence on George Booth and the foundation of Cranbrook, you can check out this great gallery guide written by a former Art Museum fellow, which I’ve scanned and uploaded here.