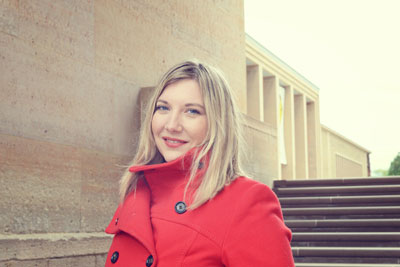 Laura Mott serves as Curator of Contemporary Art and Design at the Cranbrook Art Museum in Bloomfield Hills, Michigan. She assumed this role in November 2013 and is responsible for the Museum’s exhibition programs, as well as the development and presentation of its collection of modern and contemporary art, architecture, and design. Laura began her career in New York working with curator Lawrence Rinder on the Whitney Museum of American Art 2002 Biennial exhibition. After attending graduate school at the Center for Curatorial Studies at Bard College in New York, Laura moved to San Francisco where she served as Curator/Assistant Director of Mission 17, a not-for-profit institution. In 2009, Laura moved to Sweden where she was Curator of Exhibitions and Lecturer at the University of Gothenburg’s Valand Academy. During her tenure at the Academy, she also served as a Curator at the Gothenburg Konsthall and Guest Producer at IASPIS in Stockholm. When Laura is not working, you can find her with husband and artist Anthony Marcellini and daughter Esmé. She resides in Ferndale, Michigan.

Motto: Make a life in which you are having the conversations you want to have.

Where were you born?

I was born at home in Austin, Texas.

What were some of the pastimes and passions of your earlier years?

As a child, teenager, and young adult, I made art all the time. I did painting, drawing, pottery, photography, printmaking, sculpture—every medium really. I played high school basketball, but a knee injury ended up being my ticket out of private Catholic school. I was then accepted to the amazing High School for Performing and Visual Arts in Houston, which was ideal in that we spent half the day creating artwork and the other in intense academics. I think without that injury, my life might have been very different. Music, film, and literature were also important for me, like most art school kids.

When and how did you get your start as a curator?

My education as an undergrad art major took the typical arc that led me to an obsession with conceptual art. Art shifted from a solitary pursuit, into a communal social life with other creators, makers, and thinkers. I spent a lot of time thinking about how we view and experience art, and I started organizing small exhibitions in Austin. During my senior year, I landed an internship at the Whitney in New York, and then returned to finish working on the Biennial after graduation. I loved it, even though being a curator is an enormous amount of administration and long hours, the end product of an exhibition is incredibly gratifying.

Why does this form of artistic expression suit you?

It gives me the opportunity to have the kind of conversations that I want to have.

What have you enjoyed most in curating the Museum’s current exhibition, Warhol on Vinyl: The Record Covers, 1949 – 1987+?

There really isn’t anything I didn’t enjoy about organizing this show, because I am a huge fan of both Andy Warhol and vinyl records. The research did allow me to discover music from a lot of obscure records he designed in the 1950s, which was an unexpected pleasure.

Do you have a personal favorite in this show?

If I have to pick, my favorite album is the cover of Count Basie. There are more important albums conceptually, but this one has really endeared itself to me. It was Warhol’s first celebrity portrait, so it’s historically significant, but it’s also just a stunning ink drawing that is unexpected from him as an artist.

What three things typically come together in the best of exhibitions?

Concept, artwork, and exhibition design. I actually don’t think you can have strong exhibition without all three working well together. You can have great ideas, but if an exhibition is overly didactic or aesthetically careless, then it won’t resonate as a powerful art experience. Sometimes a visually stunning exhibition can be very seductive, but if it doesn’t make you think or ask questions, then it’s not contributing to contemporary discourse. Twenty-first century life is complicated, and our relationship with images, information, and communication has altered significantly. As cultural producers, we have a responsibility to investigate and respond to the time we live in.

Do you have a particular process in your approach to creating an exhibition?

My process to create an exhibition is usually years in the making. I will see an artwork that will resonate with me, and then associations with other artwork will build as time goes on. Rarely is there a philosophical construct or theme that I start with, my ideas for exhibitions usually start from the artwork.

Which exhibition has presented you with the greatest learning curve?

Most likely it would be my graduate thesis project from Bard titled Come On Pilgrim: A 110-Mile Exhibition. I walked over 110 miles in over nine days from the college into New York City with Swedish artist Karl Larsson. The exhibition consisted of audio from our walk, as well as five commissioned works by artists resulting from their own pilgrimage in the region—it was a massive undertaking. My walk was essentially an exploration of how one understands an artistic practice from a position of shared experience—it didn’t make sense to write about pilgrimage while only sitting in a library. It was a challenging, painful, exhilarating experience that took me from mountaintops to urban ghettos, but I think it taught me how far I am willing to go for an idea.

Is there an artist you’ve worked with that you admire most?

I cannot possibly pick one; this is a Sophie’s choice kind of question! There are several artists I admire and have worked with more than once, including Terence Gower, Ian Pedigo, and Marcelline Delbecq. Marcelline is in the upcoming exhibition titled Theater of the Mind opening November 22 at Cranbrook Art Museum. The exhibition also includes work by Bruce Nauman, Roni Horn, Hiroshi Sugimoto, and Anthony McCall, all of whom I have long admired. Artist and dancer Mårten Spångberg taught me a great deal about intellectual risk-taking. Most recently, I have had the pleasure of working on a solo show with Iris Eichenberg (also opening November 22) and it has been incredible to witness her creating a new body of work from its inception. I could go on and on.

Who has had the greatest influence on your life, and why?

He’s going to laugh at this, but my husband Anthony. We first met in New York City when we were 22 and 23 respectively. Anthony was incredibly fearless and always in search of something interesting to do, see, read, hear, or make. We became a couple a few years later, and he still gives me a lot of energy to move forward with ideas.

Is there a book or film that has changed you?

Countless! Several films have directly influenced how I think about exhibitions and artistic production. Night of the Hunter, Swimming to Cambodia, and The Five Obstructions come to mind. I would say that the TV show Twin Peaks made an indelible impression on me when it first aired. I was only eleven at the time and I remember being attracted to its strangeness and imagination. I would also say J.D. Salinger’s short story For Esmé—With Love and Squalor, because I love Nine Stories and it gave me my daughter’s name.

Do you have any advice for aspiring curators?

This is advice I try to follow from the late, great Marcia Tucker:

“There were two ways to curate exhibitions. One was didactic, the other investigative. The first was the gold standard… …The investigative model was rarely used because it meant organizing a show in order to learn something, moving full tilt ahead without knowing what the result might be. It’s what artists, if they are not hacks, do all the time: they work without knowledge of the outcome.” Marcia Tucker talking about her 1969 Whitney exhibition Anti-Illusion, in her memoir A Short Life of Trouble.

What types of exhibitions do you look forward to sharing with your audiences?

What drives you these days?

I am incredibly invested in Detroit and its surrounding cities. This is a fascinating moment in time to be part of this community. I feel a responsibility to the artists, culture, scene, and residents, as well as my most direct audience at Cranbrook Academy of Art, to bring challenging and important exhibitions to the museum. It’s a responsibility that keeps the fire lit in my belly.