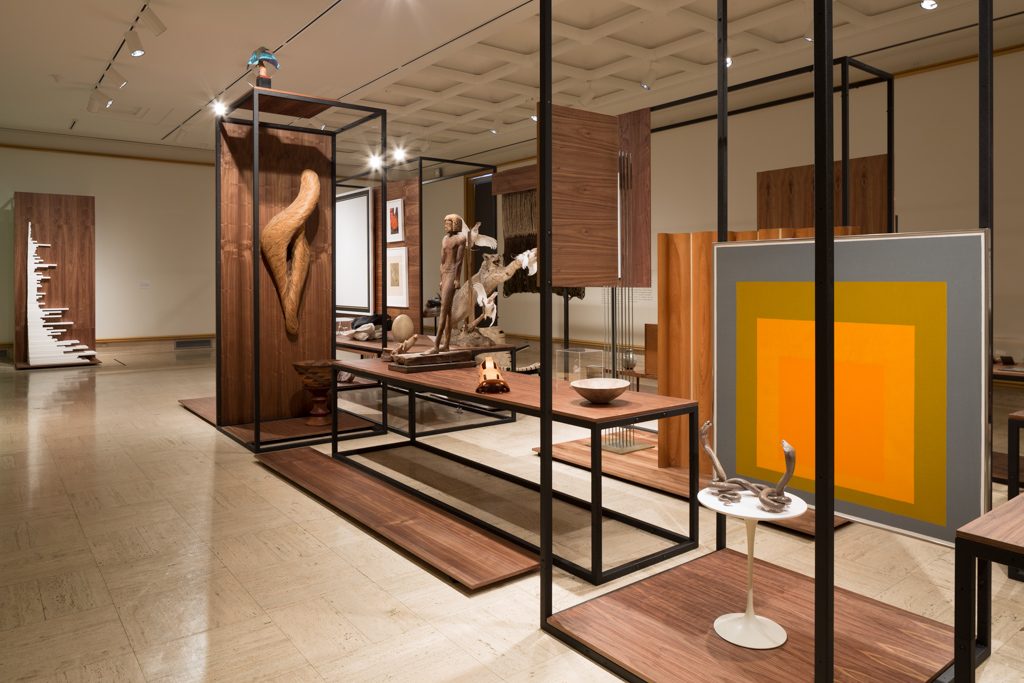 ‘The Cranbrook Hall of Wonders: Artworks, Objects, and Natural Curiosities’ at the Cranbrook Art Museum. Marie T. Hermann’s ceramic piece is visible on the left, on the brink of Balance & Collapse, both literally and figuratively. Photo by R. H. Hensleigh.
March 6, 2015

BLOOMFIELD HILLS, Mich. — The centuries-old tradition of the Wunderkammer is enjoying a resurgence of late, with cabinets of curiosities on display from the Chazen Museum of Art to Gagosian Gallery, and vitrine artists like Edmund de Waal and Joseph Beuys being hailed as champions of the medium.

With its tendency to display a widely variety of objects, the cabinet of curiosities poses a particularly scintillating gambit to curators, who are typically limited by the artist, period, geographic area, or movement of a particular show. One might say Wunderkammern display nothing so much as the perspective of their arrangers. The Cranbrook Hall of Wonders: Artworks, Objects, and Natural Curiosities at the Cranbrook Art Museum does seem to indicate a great deal about its co-curators, Laura Mott (curator of contemporary art and design) and Shelley Selim (2013–2015 Jeanne and Ralph Graham Collections fellow), particularly a sense of playfulness and real joy in the engagement with their content, drawn equally from the collections of the Cranbrook Art Museum and Institute of Science.

An inspired design by Mark Baker shatters the traditional vitrine and imbues the installation with modular fluidity, supporting a flow between four rough areas of classification: “Camouflage & Homage,” “Balance & Collapse,” “Comfort & Conquest,” and “Travel Through Space & Time.” Mott and Selim have created the equivalent of an art mix tape, with exacting attention paid to the relationships and transitions between objects, which constantly shift as the viewer moves through the allover installation.

The first striking tableau and cornerstone of the Camouflage & Homage section is the juxtaposition of a taxidermied ocelot from the mid-20th century with Bridget Riley’s painting “Ch’i-Yün” (1974). In highlighting the inborn tendency of the ocelot to emulate nature in its patterning, the display suggests that perhaps the artistic tendency to draw from nature is reflective of an animal instinct, rather than a human one. Mott is quick to acknowledge a sense of democracy that entered the curating process (as often happens with Wunderkammern) — all objects in the Hall of Wonders have equal standing, regardless of value, and that liberation from traditional hierarchies brings a freedom to the experience of the exhibit.

But as nature abhors a vacuum, so do we immediately begin the work of forming a new hierarchy to govern these dozens of objects and the countless associations between them. Ultimately, the Wunderkammer is about control. Pioneered during the 16th-century rise of the natural sciences, the cabinets perhaps unconsciously served as a way to manage the potential anxiety at finding ourselves in a world ruled by science rather than God. The violent aspects of this urge are explored most directly in the section Comfort & Conquest, which positions Kara Walker’s linocut “Keys to the Coop” (1997), showing a girl perhaps about to eat the head of a decapitated chicken, adjacent to an elephant-foot umbrella stand. Both are powerful indicators of the collateral damage associated with the desire to explore and possess the world.

The exhibition includes several scheduled “Acts of Curiosity” — live components that invite artists to create work in response to the Hall of Wonders. The first was ceramicist Marie T. Hermann’s installation of a precarious tower of tiles that correlate with the shadow profile of every work in the show, perfectly embodying the warring elements of “Balance & Collapse.” Tomorrow night there is a performance by dancer Biba Bell with musician Robert Aiki Aubrey Lowe, capitalizing on Bell’s fascination with and ability to draw inspiration from alternate or offbeat performance spaces.

These pieces provide a final, vital dimension typically absent from a traditional Wunderkammer — the introduction of living entities, whose responses to the works adds an element of reification to this assemblage of static objects. 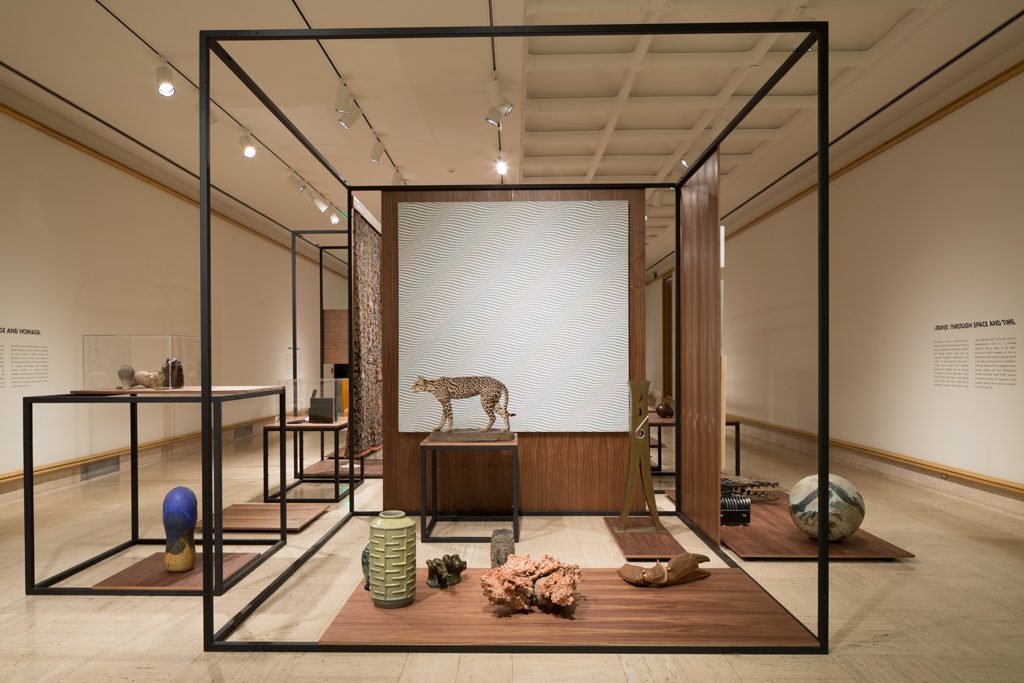 The centerpiece of Camouflage & Homage includes a taxidermied ocelot in front of Bridget Riley’s “Ch’i-Yün” (1974). Photo by R. H. Hensleigh. 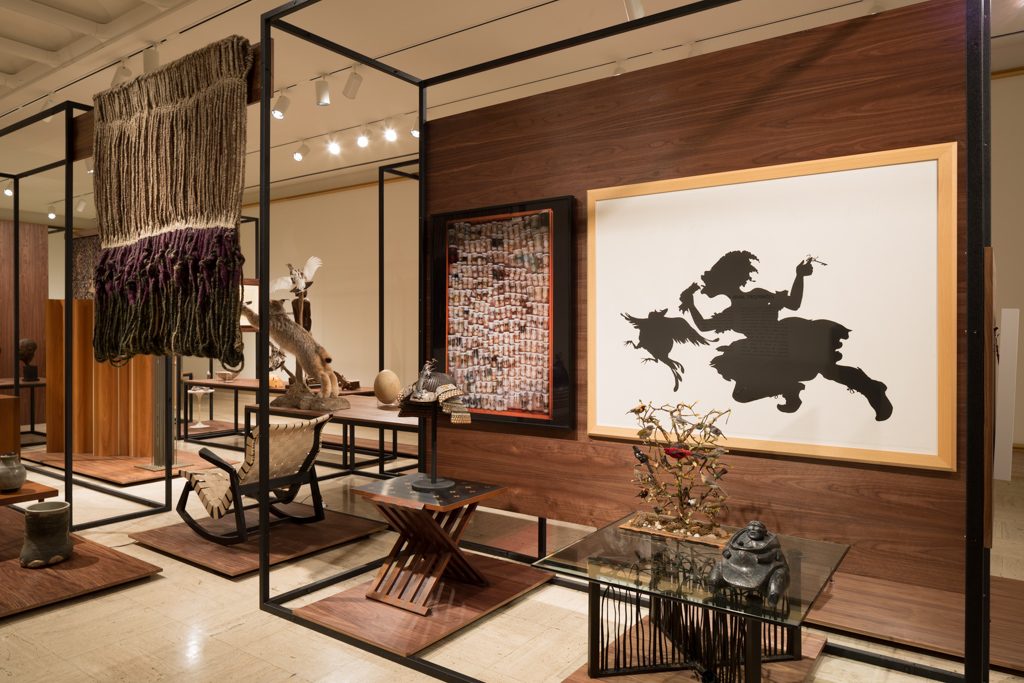 Taxidermy and a photograph of egg specimens in Comfort & Conquest remind us that to collect the wonders of the world means also to take them out of life’s circulation. Visible at center right is Kara Walker’s “Keys to the Coop” (1997). Photo by R. H. Hensleigh. 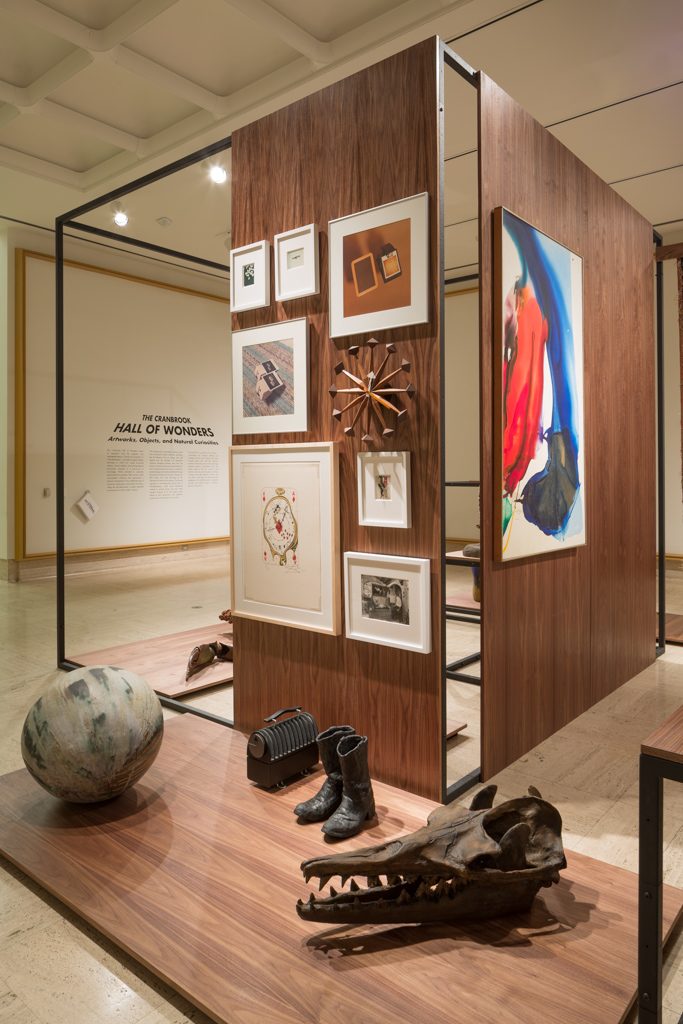 The design elements of the exhibit resonate particularly well with Travel Through Time & Space section, which invokes a sense of being in the mid-century modern rec room of some incredibly tasteful grandparents. Photo by R. H. Hensleigh.

Posted In: Cranbrook Art Museum in the News, Hall Of Wonders