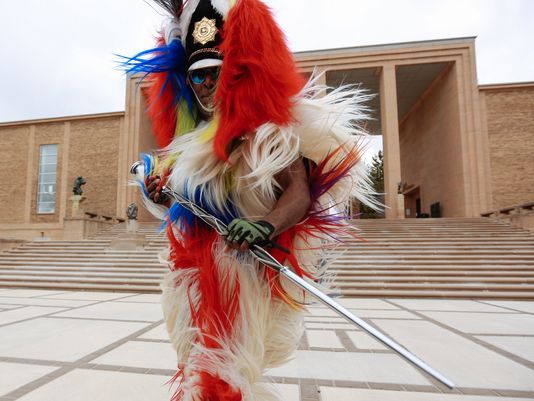 Go ahead, Nick. Strike a pose.

Nick Cave, a leading contemporary artist, was having his picture taken on the Peristyle in front of the Cranbrook Art Museum on a blustery Friday wearing one of his signature soundsuits — wearable costumes that connect the dots between sculpture, fashion design, body art and performance art. This one was a shaggy red, white and blue outfit adorned with rainbow plumage. Cave completed the costume with shades, a drum major hat and military baton.

“I don’t really dress like this every day,” said Cave, grinning, after the shoot.

A 1989 graduate of the Cranbrook Academy of Art, Cave was back on campus to launch one of his most ambitious projects to date. Unfolding over the next seven months, “Nick Cave: Here Hear” will include not just a major exhibition at the Cranbrook museum opening June 20 but a series of free public collaborative performances involving his soundsuits. Among those scheduled:

■ “Figure This Detroit,” a kind of culminating survey at the Masonic Temple. (Oct. 4)

During the next few weeks, Cave will be photographed in myriad neighborhoods around Detroit, with the resulting pictures published as a book this summer, “Nick Cave: Greetings from Detroit.” Cave likes to use the phrase “collective dreaming” for what he’s up to in Detroit.

“I’m saying, ‘This place matters,’ ” said Cave. “And in these little invasions I’m looking for ways to inform, stimulate and change the texture of an area.”

The project has drawn a wide range of sponsors, most notably the John S. and James L. Knight Foundation, which awarded the Cranbrook Art Museum a $150,000 matching grant to support Cave’s exhibition and performances.

While Cave’s return to Detroit is largely about celebrating the city and helping to re-imagine its future, the artist’s works always contain multiple layers of meaning. His exuberant soundsuits have tremendous visual appeal, but also they speak in a sophisticated way to issues of identity and race. They were originally conceived in the aftermath of the Rodney King beatings as a kind of camouflage hiding details of race, gender and class.

The recent police shootings of African-American men in Ferguson, Mo., and North Charleston, S.C., suggest that the initial inspiration for Cave’s work remains as fresh as today’s headlines. “The art can open a dialogue about how an individual and community negotiates all of this,” said Laura Mott, curator of contemporary art and design at Cranbrook.