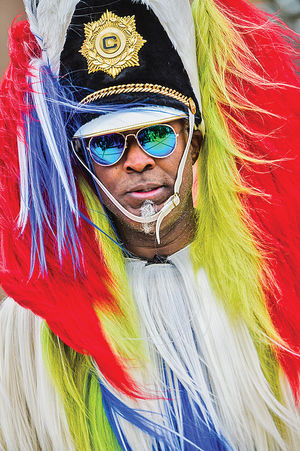 BLOOMFIELD HILLS — A noted artist is making his way around metro Detroit this month, staging dramatic photo shoots in some of the city’s most interesting and diverse neighborhoods.

Artist, dancer, sculptor and Cranbrook Academy of Art alumnus Nick Cave is taking on his most ambitious project to date with a photo series called “Nick Cave: Here Hear.”

Through May 1, Cave will make stops at different locations around Detroit — including the Dequindre Cut, the Brightmoor neighborhood, the Parade Co., Mexicantown, the African Bead Museum, Eastern Market and the Fisher Building — to stage photo ops in his iconic Soundsuits, which often draw crowds to his spectacle and are described as wearable fabric sculptures that are bright, whimsical and otherworldly, according to his Wikipedia page.

The first of Cave’s 13 pop-up shoots took place last Friday outside Cranbrook Art Museum, on the peristyle, where onlookers were able to catch the mastermind at work on the particularly windy spring day.

“I think this is just an amazing homecoming for (Cave) to do this incredible project at this moment in time and contribute to the momentum of creativity and production rebirth that’s happening in Detroit at the moment,” said Laura Mott, museum curator.

Cave’s project, according to Mott, will look to energize Detroit’s creative renaissance and connect people from across the region in that common goal.

“Nick Cave is one of the most prolific artists working today, someone who is really able to take on some of the big questions facing contemporary life concerning race and identity,” said Mott. “He works on a very large scale, and he wants to reach thousands of people and help us move forward, to take in this kind of meaningful spectacle together and how that can be momentum for change and creativity. We talk about moving forward, and since I’ve been here, I’ve noticed that these conversations are being had everywhere, from board meetings to front porches. That was a project we were really interested in participating in.”

After Cave’s shoot is complete, the results will be on exhibit June 20-Oct. 11 at the Cranbrook Museum of Art. The collection will include about 30 sculptural Soundsuits, newly commissioned artworks and tapestries inspired by Cave’s childhood watching the night sky.

An additional gallery will feature a selection of his recent sculpture work and a projection room of the artist’s video work. Finally, the “Map in Action” room will serve as a hub for the ongoing portion of the project, which will include live performances around Detroit using the wearable Soundsuits. When the suits aren’t in use, visitors will be able to see them on display in the room, and when the performances are finished, guests can see video footage of the events.

The photos will also be published as a book this summer, titled “Nick Cave: Greetings from Detroit,” depicting the positive creativity of the city.

Not only is the project a large one for the artist, it’s also the most ambitious event of its kind for the museum, as well, according to Kelly Lyons, curator of education at Cranbrook Art Museum. She said she’s been working with museum staff to develop three seasons full of events for students, families and visitors to coincide with Cave’s exhibition.

“We have summer camps for grades one through nine, and one of those camps is called ‘Costumes and Characters,’ which will draw inspiration from the Nick Cave exhibition,” said Lyons. “We also have a pre-college program called ‘Clothing as Art: The Garment Sculpture,’ which is three weeks long, for teens who are interested in clothing as art, fashion design or Nick Cave’s work and kind of what that means.”

Lyons said she’s also developed numerous workshops for students, including the Costume Cave, designed for K-12 students to explore their own identity in terms of place and person, and how those experiences would inform their own costume creations. Since Cave’s Soundsuits are embellished with sticks, buttons, bottle caps and other reclaimed items, students will get the opportunity to make costume components from similarly humble materials.

Teachers can get in on the action by signing up for Lyons’ interdisciplinary curriculum to coincide with Cave’s exhibition.

“We want to bring art to a level that crosses all boundaries, and we really feel like the exhibitions here can often connect across a curriculum,” she said, noting that teachers in the area have already signed up for the program and field trip opportunities.

“This is the first academic year we’ve offered school workshops, and schools are already scheduling for the Costume Cave workshop. That’s great for us.”