Jewelry of Harry Bertoia on display at Cranbrook | The Detroit News 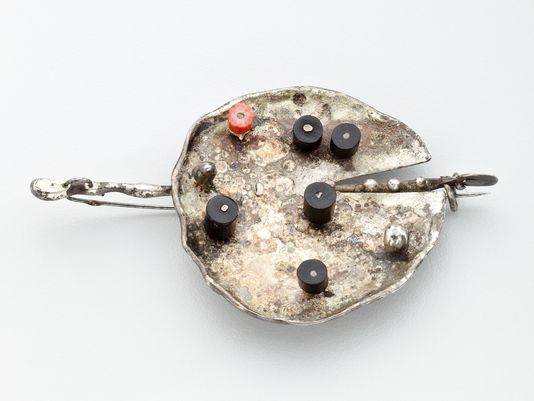 Harry Bertoia was one of the towering, mid-century modernists — along with architect Eero Saarinen and furniture designers Florence Knoll and Charles and Ray Eames — who rocketed out of Cranbrook in the 1940s and revolutionized design and everyday life.

The Italian-born sculptor, who died in 1978, is the subject of the new show, “Bent, Cast & Forged: The Jewelry of Harry Bertoia,” at the Cranbrook Art Museum through Nov. 29.

Bertoia, who came to the Cranbrook Academy of Art in 1937 on a full scholarship, is probably most famous for his classics of modern life, the “Diamond” wire chairs produced by Knoll Associates.

But he also designed the elegant metal screens at Saarinen’s GM Tech Center and the Dallas Public Library. (Dallas’ mayor at the time described the screen as “a bunch of junk painted up,” but the public came to love it.)

“When you think of the mid-century ‘Mad Men’ white guys and the furniture they designed,” says Shelley M. Selim, the Jeanne and Ralph Graham Collections Fellow at the museum who curated the show, “Bertoia is right up there in the top 10, if not the top five. Bertoia is huge.”

But his jewelry has been largely overlooked, an omission the Cranbrook show neatly corrects. Housed in a dramatically darkened gallery, the 30 pieces are suspended in glass cases and elegantly lit by in-house designer Mark Baker.

The pendants and brooches on display are breathtaking, even if they look like little you’ve seen before. Perhaps in reaction to the sterile Modernism of the 1930s, Bertoia invested his abstract designs with the shapes and patterns of the natural world.

“Biomorphism” is the technical term for this approach, which Selim defines as “a more organic-looking curvilinear approach to modernism. It’s all about exploring microbiology and organic forms.”

Three pieces owned by the Cranbrook Art Museum are on display, as well as 27 items on loan.

When Bauhaus great Walter Gropius visited Cranbrook and examined Bertoia’s work, which might have looked a little two-dimensional, his question was, “What can you do in space?” The answer, a silver and ceramic hatpin from 1943 now owned by the Montreal Museum of Fine Arts, is one of the most striking pieces on display, looking a bit like a mock-up of planetary orbits around an imaginary sun.

Walking out of the show, you might be tempted to wish that Bertoia had kept making jewelry, rather than giving it up fairly early in his career. But that, of course, would come with its own drawbacks.

“The addition of more jewelry to his art repertoire,” Selim notes, “would have meant the subtraction of something else” — like those world-changing “Diamond” chairs.