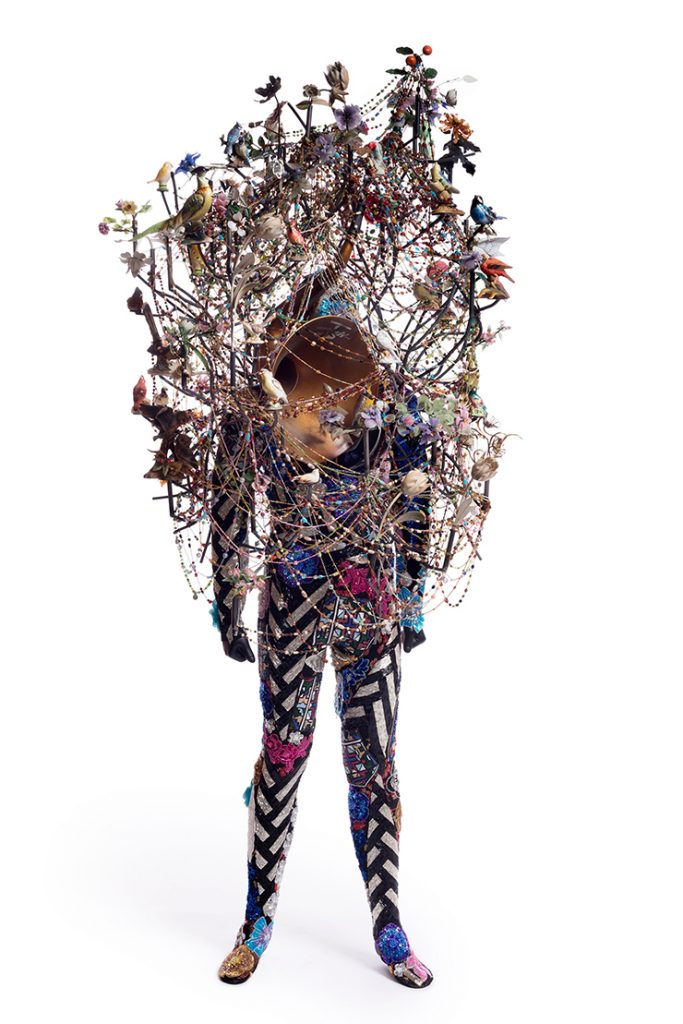 Supported by a stack of storage boxes in Shed 5 of Detroit’s Eastern Market one humid morning, the artist Nick Cave steps gingerly into a suit of clipped twigs, one leg at a time. Crouching at his feet, two assistants adjust the jagged hem of each trouser leg while Bob Faust, Cave’s studio director and right-hand man, lifts the waist and draws the suspenders tightly across his chest. Struggling to coordinate their movements, the team of three hauls the garment’s top half — a towering assemblage of sticks weighing more than 50lb — above Cave’s head, lowering it over his face and settling it on his shoulders. Faust takes his hand and leads him outside; like a splintery Chewbacca, Cave lumbers blindly through rows of poppies to a small grove of potted pines, the suit’s improbable wooden surface clacking as he moves.

Nick Cave — the American sculptor, fashion designer and Alvin Ailey-trained dancer, not to be confused with the Australian musician of the same name — is known for hybridised artworks that defy categorization, his aptly named “Soundsuits” primary among them. Part-sculpture, part- 2 performance garment, part-political statement, these hand-stitched, full-body costumes integrate repurposed materials, from dyed human hair to feathers and handbags, into vibrant, wearable tapestries.

Having freshly graduated from the prestigious Cranbrook Academy of Art, 20 miles northwest of Detroit, Cave created the first Soundsuits in 1992 in response to the Rodney King race riots. Decades later, he has returned to the troubled metropolis so formative in his artistic evolution with a series of “Soundsuit Invasions” — plein-air shoots by local photographer Corine Vermeulen — conceived as part of Here Hear, a major survey of Cave’s work that opens on June 20 at Cranbrook Art Museum, which is based at the academy’s campus.

“At the end of the day, the Soundsuits are just puppets,” Cave says, his honeyed southern drawl muffled by his headgear. A living sculpture among the trees, he poses in place before a spontaneous crowd of early-morning shoppers, extending limbs and leaning forward to emulate the gentle bend of a tree trunk.

“But what is interesting is that, for these performances, the stage is the world. And so the question becomes: ‘What are our boundaries, how can we move as individuals in the constraints of a public space, and how do the principles of putting on the costume relate to our daily ritual of getting dressed, preparing ourselves to face the world?’”

Born in Missouri and based in Chicago, Cave first came to Detroit in 1987, the only black student on Cranbrook’s campus in the wealthy suburb of Bloomfield Hills.Here Hear, which has been organised with the museum’s contemporary art curator Laura Mott, includes a comprehensive overview of his work as well as an extensive calendar of satellite performances, events and workshops in neighbourhoods across Detroit, all involving foundations and communities that colour the city’s creative landscape.

“When I got to Cranbrook,” Cave, now dressed in sweats, says, “I was suddenly confronted by my blackness for the first time — and I was in shock. I didn’t know how to deal with it. Without Detroit, I don’t know if I could have done Cranbrook; the city was really very significant in my education, and in staying balanced.”

He conceived Here Hear, accordingly, as both homecoming and homage — with Motor City, which is undergoing a period of regeneration, as the crux, context and even co-author of his show. In “Heard Detroit”, modelled on a programme he produced in New York’s Grand Central station in 2013, Cave will recruit high-schoolers from Detroit School of Arts for a performance in September along the city’s recently rehabilitated riverfront.

A series of “Dance Labs”, organised with the Museum of Contemporary Art Detroit, pairs local dance companies and musicians with Cave-designed props, and the procession “Up Right Detroit” — of particular resonance to Cave, who is gay — will star lesbian, gay, bisexual and transgender teens.

“In my art I’m working with the discarded, the dismissed, the devalued substances of our society, and wondering how we renegotiate their way back into society and give them new life,” he says. “The same thing is happening with Detroit . . . It’s fascinating that a city can completely crash and then begin to move itself into this renewal kind of space.”

Mott, who transferred to Detroit less than two years ago to join Cranbrook’s curatorial team, conceived the show as a way of bringing the institution — a 40-minute drive from downtown — 3 into more intimate contact with the city’s residents. “There are mental barriers that exist in the landscape of this city,” she says, “but I think it’s important that people don’t fixate on that. With this show, we are engendering connections and collaborations between Detroit artists of all shades that will be lasting, even after Nick leaves. And we want everybody to feel that Cranbrook is their museum.”

To that end, museum staff will be distributing exhibition tickets in every area touched by its outreach programme, and all related events are free.

“We can bring the art to the people, but we want to get people to come to Cranbrook, too,” Mott says. “Nick’s show is about changing the choreography of how people move throughout the city — and in a city like Detroit, there is a lot at stake.”

At the museum, an entire floor is dedicated to Cave’s work, featuring a psychedelic display of his decorative Soundsuits, a site-specific wall tapestry made from his current material obsession — buttons — and a recent suite of sculptural assemblages built from overtly racist memorabilia.

“Nobody wanted to talk about the political aspect behind the Soundsuits — not ever,” he says. “So I decided I was going to have to come at it strong.”

The “Map in Action” room, the last in the show, allows a glimpse behind the scenes: a large Detroit map locates events across the city, an evolving video archive documents the happenings as they take place, and a cupboard with a semi-transparent acrylic door houses the Soundsuits used in the performances, its colours morphing as the garments come and go.

“We don’t dream any more,” Cave concludes. “And we need things that are going to uplift; we need positive influences. We’re not getting it from the news, so guess who has to do it? Us artists. I was raised to understand that I’m a black male, and there will be odds against me. But the takeaway was like, ‘OK, now you know, so get on with your life and be lovely’.”