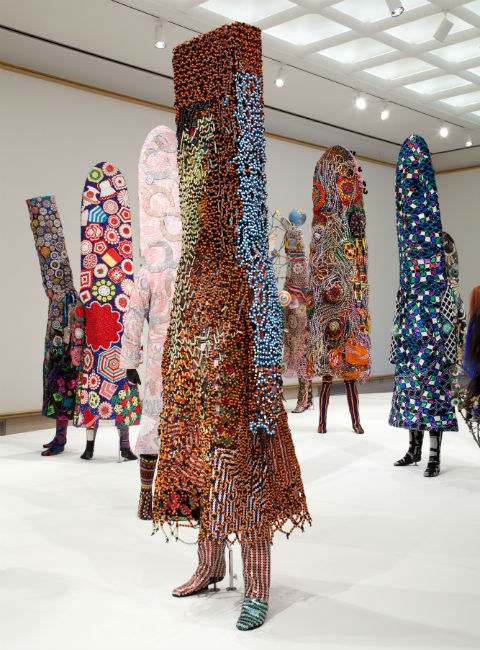 “Thank God for Detroit,” exclaims Nick Cave as he lays out the plans and inspiration for his takeover of the City. His trademark Soundsuits have already invaded Eastern Market, the Michigan Assembly Plant and the Fisher Building for photo shoots and promotional activities, with the main event, Nick Cave: Here Hear, opening to the public this weekend at Cranbrook Art Museum. But Cave’s art and community events transcend far beyond Cranbrook’s Bloomfield Hills environs, into Detroit’s Riverfront and Brightmoor neighborhood, for an interactive, participatory exhibition unlike any the museum has produced.

Cave, an African-American, was a master’s student at the Cranbrook Academy of Art’s lauded fine arts program in 1988 and 1989, where he recalls being the only minority at the time. As a result, he says he spent about half of his time in Detroit. “Detroit was so pivotal in my time at Cranbrook because it really allowed and created a balance for me. It was there when I needed to get that urban edge. It really worked to have this amazing overall experience with Detroit and Cranbrook.”

In conceiving his exhibition with Cranbrook Art Museum curator Laura Mott, it was imperative that he recreate that balance.

“The exhibit at Cranbrook is the heart, the center. For part of the exhibition, there’s this map, which will basically be mapping and tracking the performances, the invasions, every performance that we do throughout the city, and it’s where all the performance Soundsuits are held. You really get to see how things are arranged and how things are pulled in and out of that space.”

At the museum, one will find approximately 35 of his Soundsuits, plus 12 new sculptural works, and video. The exhibit will constantly be updated throughout its run from June 20 – October 11, as videos from Cave’s ongoing Detroit performances are incorporated into the exhibit at Cranbrook.

“It’s really about getting outside of Cranbrook and working in the trenches of the City and collaborating with musicians and choreographers and dancers, various art community and art centers, theaters and really just creating three-months of performances that are interwoven with Metropolitan Detroit,” notes Cave.

The Museum of Contemporary Art Detroit (MOCAD) is a partner for his Dance Labs, which will pair local dance companies and musicians to create performances with Cave’s sculptures. The Ruth Ellis Center, the Dequindre Cut, Brightmoor and Campus Martius represent the variety of areas which will serve as the backdrop to these performances.

Cave’s first Soundsuit dates back to 1992, a response to Rodney King and the Los Angeles riots. “I started to build a sculpture [out of twigs] and then realized I could put it on, and then it made sound when I put it on. When you’re protesting, you need sound to be heard. What it looked like when I put it on my body, it became larger than life, it hid my identity—my gender and race. It was forcing the viewer to look at something without judgement.”

Today’s suits still share that sense of “civic responsibility” Cave says was borne out of that moment.

“Today, I’m still working with discarded materials, reevaluating and changing the hierarchy of how they are employed into my work.” Cave uses anything “from bottle caps, to buttons to hair, anything that can establish a level of embellishment and adornment.”

While the suits are graphically bold and eye catching, the visual component is only half of its import. “I’m making these objects, a secondary skin, and on one hand, it’s about protection, about hiding, and at the same time, sound becomes a discovery as one puts an object on. What’s always amazing to me is it’s never the sound I think it will be. That is created through movement and what that means in terms of how one moves, as well as the restriction of movement.”

As a variety of Detroiters, including students from the Detroit School of Arts, don these suits, Cave describes how each will intrinsically change the nature of the object, and his understanding of his art. “Not only is sound different, but movement is different. I’m always learning about the work because you and I could wear the same thing and you’re going to respond differently than I am in it.”

Thus, the suits are the perfect instruments to combine dance, theater and a museum exhibition. Together, there is “a level of seduction” to the works that change within each different environment.