The Master of Metals : An Exhibition at Cranbrook Explores Harry Bertoia’s Jewelry and the Forging of His Career | Modern Magazine 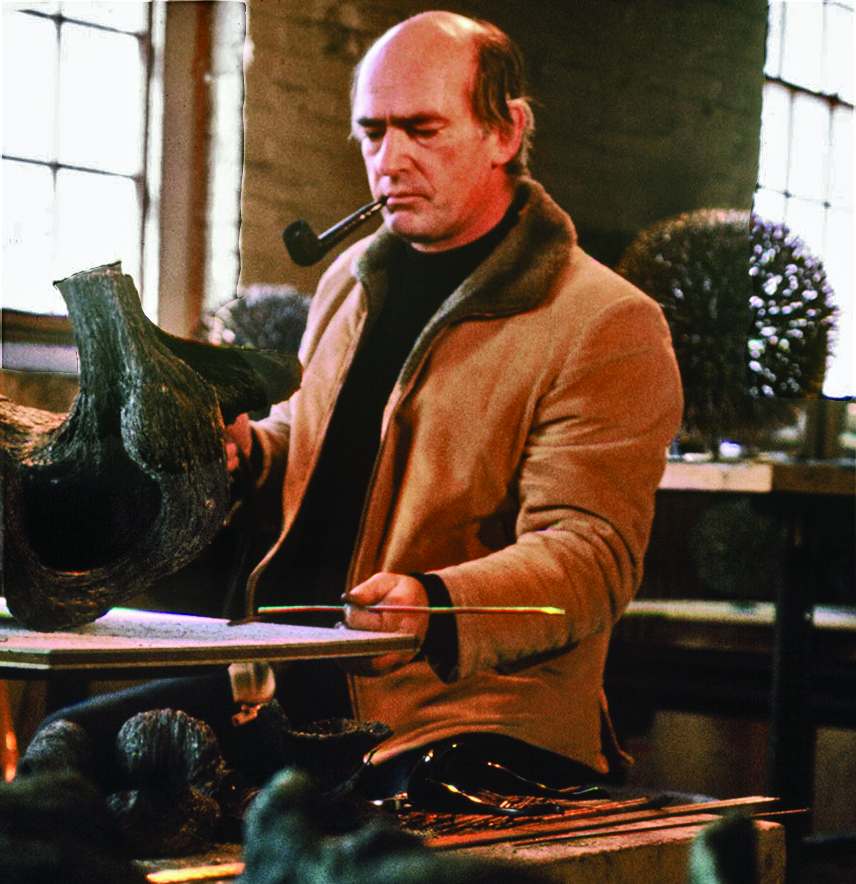 A WRITHING CENTIPEDE WROUGHT in hammer­ed brass and a gold necklace evoking the decayed, wilted sepals of a plant are among the jewelry de­signs on view in the Cranbrook Art Museum’s ex­hibition Bent, Cast, and Forged: The Jewelry of Harry Bertoia. To celebrate the centennial of the artist’s birth, the institution has organized the first museum exhibition devoted exclusively to his jewelry.

A founder of the American studio jewelry move­ment, Bertoia’s concepts, materials, and methods of construction laid the groundwork for a style that flourished in the postwar years. While he is better known for his large-­scale sculpture and the chairs he designed for Knoll, Bertoia’s jewelry designs from the early 1940s were vital to the develop­ment of his versatile career.

Arri (Harry) Bertoia was born on March 10, 1915, in the village of San Lorenzo in northeast Italy. At fifteen, he and his father immigrated to Detroit, a growing city with the promise of industry and development. Bertoia showed a penchant for art and design as a student at the renowned Cass Technical High School and later at the Art School of the Detroit Society of Arts and Crafts. In 1937 he received a full scholarship to the Cranbrook Academy of Art in Bloomfield Hills, Michigan. Cranbrook offered an unstructured curriculum led by visiting and resident artists who encouraged students to immerse themselves in a range of disciplines. This experiential model helped to shape the careers of many notable twentieth­-century American designers, including Charles and Ray Eames, Jack Lenor Larsen, Eero Saarinen, and Florence Knoll.

Bertoia became absorbed in metalwork at Cranbrook, fascinated by metal’s reflective quali­ties and the technical skill required to manipu­late it. After two years of study, he was asked to reopen and lead the metal workshop, which had been shuttered during the Depression. He then embarked on a highly productive period, using jewelry and tableware as vehicles to experiment in metals and discover their varied properties. As head of the metal workshop from 1939 to 1943, he produced about a hundred pieces of jewelry, many of which were commissions or gifts for his friends and family. Recipients of his one­-of-­a­-kind ornaments included the Eameses, Pipsan Saarinen Swanson (sister of Eero Saarinen), Loja Saarinen, Ruth Adler Schnee (Cranbrook­educated textile designer), and his own wife, Brigitta Bertoia.

Bertoia’s tenure at Cranbrook was pivotal in his career, as he developed an aesthetic based on biomorphic abstraction. He modeled his jewelry forms on insects, withering plants, bones, and microscopic organisms that often appeared in states of growth or decay. Taking a neovitalist ap­proach (a philosophical belief that all living things share a vital and organic force), he created deliberately ambiguous jewelry designs that captured the energy and essence of nature rather than serving as exact replicas. The biomorphic jewelry also fostered Bertoia’s discovery of form, dimen­sion, line, and mass, ideas he would carry out in his larger sculptural works of the 1950s.

The technical process of Bertoia’s jewelry pro­duction was just as vital as the final product. Cura­tor of the exhibition Shelley Selim explains, “When he was at Cranbrook, jewelry­-making was both a teaching and a learning process for him, so you see him testing out new techniques both for his own benefit and to demonstrate them to the students he was instructing.” Working primarily in silver and gold, Bertoia cast his jewelry, but also worked in a more spon­taneous, free­-form style in which he quickly manipulated molten metal into small sculptural forms before the mate­ rial hardened. He also bent, cut, and hammered wire and non­precious scrap metal. The visible hammer marks and indentations reflect this exploratory process, an attribute of a Bauhaus­-influenced education. Bertoia’s work in jew­elry solidified his career as a metalsmith, the title he most closely identified himself with throughout his career. “It was always about this intimate relationship he had with the material,” Selim says, “and when you’re examining it from that perspective there is really nothing he made that is more intimate than his jewelry.”

When the United States entered World War II in 1941 Cranbrook underwent a change that altered the course of Bertoia’s career. Metals were rationed for war production, and the Cranbrook metal department was closed in 1944. Bertoia then relocated to Southern California, where he joined the Eameses in the development of molded ply­ wood for furniture and war contracts with the Evans Products Company. The collaboration eventually produced the famous DCM and LCM molded-­plywood chairs mounted on metal bases, to which Bertoia made a significant con­tribution. When Bertoia’s efforts went uncredited, how­ever, he channeled his energy into the production of metal sculpture and eventually joined Knoll in East Greenville, Pennsylvania.

Using the concepts he first applied to his jewelry at Cran­brook, Bertoia developed a line of welded metal chairs for Knoll in 1952. The highly successful Diamond chairs, with an organic cellular pattern that he had also explored in jewelry, helped popularize modern design in Ameri­can homes and allowed Bertoia the financial freedom to continue his exploration of sculpture. He spent the remainder of his career working in metal forms—large­ scale public commissions and his unique series of “Sonambient” sculptures that explored movement and sound. The innovations in form, line, and movement of Bertoia’s openwork sculpture and organically modern furniture were products of the discoveries he first made in metal jewelry. 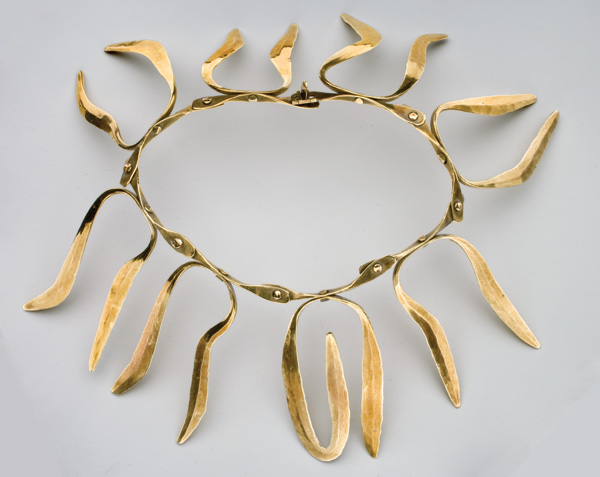 Bertoia’s design for this articulated brass necklace, c. 1942–1943, was based on plants in a state of decay. 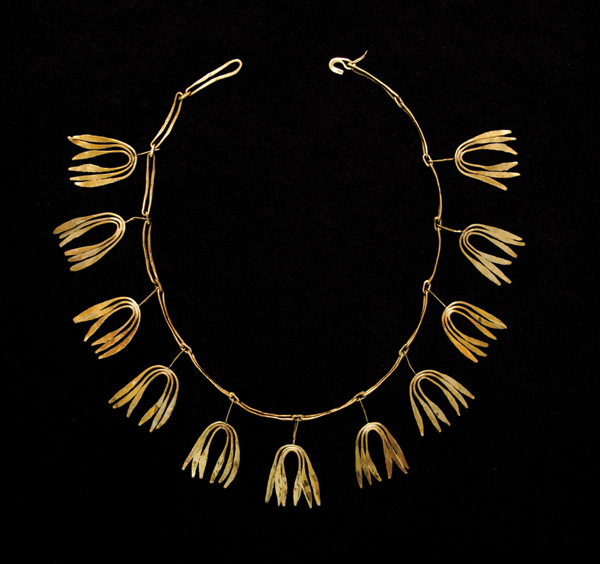 Bertoia’s interest in capturing the energy and essence of nature is represented in this organically shaped gold necklace, c. 1943.