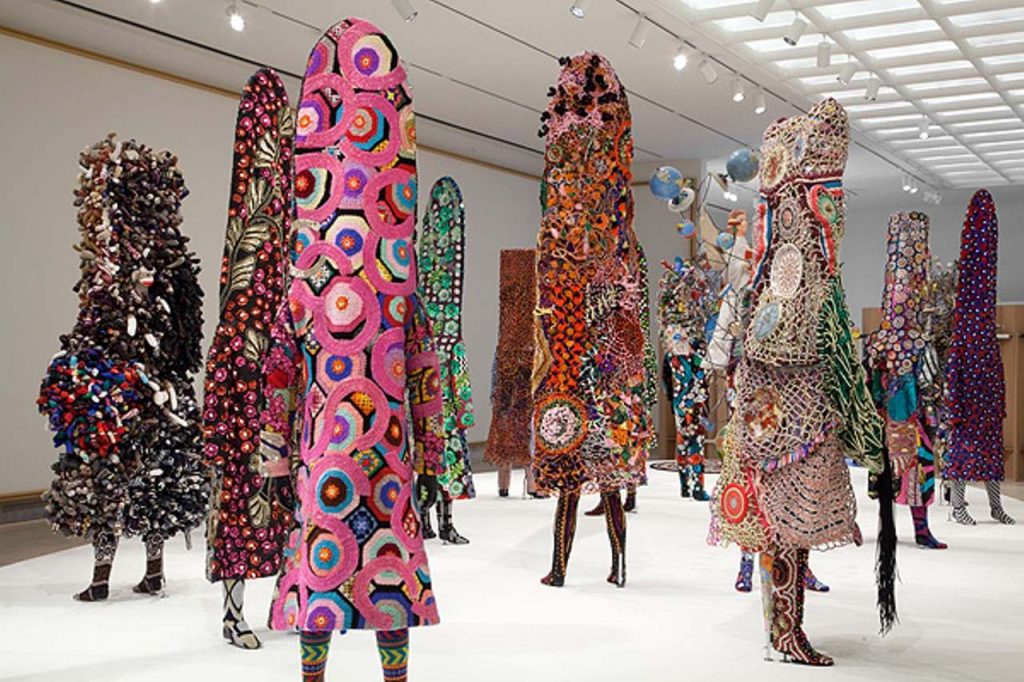 Missouri-born, Chicago-based artist Nick Cave has made a name for himself with his colorful “Soundsuits” — ornate, wearable sculptures that have been exhibited as standalone art objects and costumed dance performances. Lately, he’s partnered with his alma mater the Cranbrook Academy of Art (Cave is an ’89 graduate of their master’s program) to bring performances around the metro Detroit area. We caught up by phone with Cave from his Chicago studio to learn more.

Metro Times: Tell us more about your Soundsuits — when did you first arrive at that artistic revelation?

Nick Cave: After graduating in ’89, I was offered at position at the School of the Art Institute of Chicago. It was ’92 — when the Rodney King incident happened, and the L.A. riots. It just literally flipped me upside down. So I just started thinking about it, and the fact that as soon as I stepped out of the privacy of my home I could be one of the statistics. I started thinking about myself as an individual, as a black male.

I happened to be in the park — I was just sitting there and I looked down on the ground and there was this twig, and that twig metaphorically spoke to me about being discarded, being dismissed, walked on, stepped on, abused. And I proceeded to gather all of these twigs in the park, brought them home, started building this sculpture, and all of a sudden once I was done I realized I could wear it, and once I put it on and started to move it made sounds. That led me to think about the role of protest, that in order to be heard you got to speak loud. At the same time, was I building a protective suit of armor? This thing looked scary, it was sort of something that was unfamiliar, which looked threatening. And as I was reading about King’s description, these are the words they were using.

MT: Sadly, it seems like things haven’t changed much since King and the L.A. riots …

Cave: Oh my God. I mean, you got Trayvon Martin, Ferguson, New York, Baltimore, and just recently the event that happened at this graduation party [near Dallas]. I’m just like, I can’t even keep up. And so I’m just trying to sort of do what I can as a visual artist to bring a consciousness to the world and a response to this tragedy, this sort of new form of racism — and yet we still are not talking about it as a people, as a community.

MT: In one way your work seems to address these issues in a playful way.

Cave: Yeah, but that’s just the disguise. That’s my way of seducing you and pulling you into the work. The moment you’re inside it starts to break down. It’s dark. That’s when you have to decide whether you’re willing to go there, or do you, like many, turn their backs to it?

MT: What’s it like to wear one of those suits?

Cave: There is a liberating sort of experience — you’re able to sort of move freely, openly. But I think when you wear it with a group of people, I think the camaraderie is amazing. It’s very shaman-like. You become this sort of shaman of sorts, and enjoy this liberty to move. And you gotta come to it with conviction. You can’t allow the suit to wear you.

MT: The suits are very sculptural, yet in distinguishing you from the musician, Nick Cave, your Wikipedia page says “performance artist.” Where do you feel your work falls?

Cave: I think I see myself as an artist. Just an artist. I really work between sculpture, performance installation, video, and dance. I feel like I’m just an artist that really finds the means necessary to support the idea.

MT: Do you have a team of people who help you fabricate these suits? How many on your team?

Cave: I work with about three different fabricators here in the city, and in my studio I have anywhere from 10 to 30 assistants, depending on the project, which is hard, 20 new assistants for an up-and-coming project, as much as a year to produce this one piece. It really sort of varies. I am right in there completely, 110 percent. Pretty much anything that looks really complicated, I probably made it. I’m a maker and I’m in the studio probably around the clock. When they go home at 5, I’m working until midnight, pretty much all the time. So I’m completely hands-on, and very involved.

MT: By your estimates, how many of these suits have you made in these past 20 years?

Cave: Oh God I don’t even know. Probably 600. I’ve documented them all