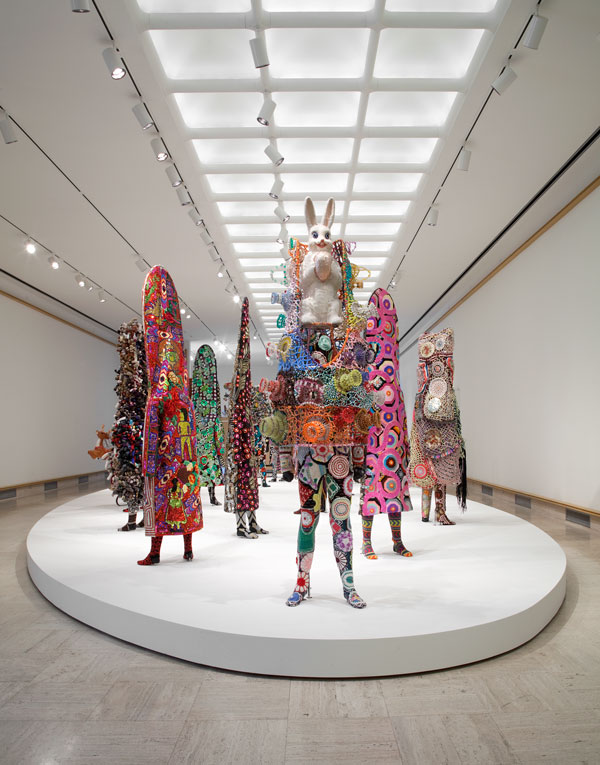 This weekend marks the beginning of a major exhibition of work by Nick Cave at Cranbrook Art Museum in Bloomfield Hills, a small town just north of Detroit. It’s a homecoming for the artist, who studied at Cranbook’s art academy in the 1980s and still feels a connection to both school and city. “Detroit played a critical role in my education,” he says. “It provided me a very radical mind-set, the city provided the soul.”

But when Laura Mott, curator of contemporary art and design for the museum, invited Cave to return to his alma mater for a solo exhibition, he agreed with one condition. “I’ll only do it if I can do some outreach work.”

The result is “Nick Cave: Here Hear,” the artist’s most wide-ranging project to date, which will include 40 soundsuits (elaborate wearable sculptures that have become his signature), a new tapestry inspired by Cave’s childhood fascination with the night sky, and a selection of his recent wall-based works, videos, and sculptures—including a new artwork inspired by Trayvon Martin.

The pièce de résistance, though, may be the Map in Action room—a live-action hub that will feature a monitor feeding updates and videos from Cave’s roving Detroit performance series and display soundsuits being worn throughout the city through the fall. “I was very much hooked into the underground scene in music and dance when I was at Cranbrook, and it’s all still here, but now it’s coming up and redefining itself again,” says Cave, who plans to work as a “change agent” in the city for the duration of his show, connecting choreographers and dancers with musicians and hosting dance labs at the Museum of Contemporary Art Detroit. “You can go to a city and create work, but we really want to reintroduce all these individuals in the performing arts and reconnect everyone.”

Cave’s dancers will perform at the Redford Theatre followed by a celebration engaging the emerging Brightmoor, Old Redford, and Northwest Detroit communities where they’ll show films and host youth outreach. He’s also enlisting LGBTQ groups to make found-object-based costumes and instruments. He’ll even have 60 high school dancers parading down Detroit’s riverfront on September 26 with 30 of Cave’s life-size horse sculptures. Then on October 4, the project will come to a close with a homecoming performance at Detroit’s Masonic Temple, where Cave will do a new piece and reunite all who have participated for one final “performance intervention.”

“One of the opportunities in Detroit is that you don’t have to wait for a stage; you can create a performance anywhere and redefine the city,” says Cave. “I hope [these events] bring performers together who have gone underground and forgotten their value and their role in the city.”