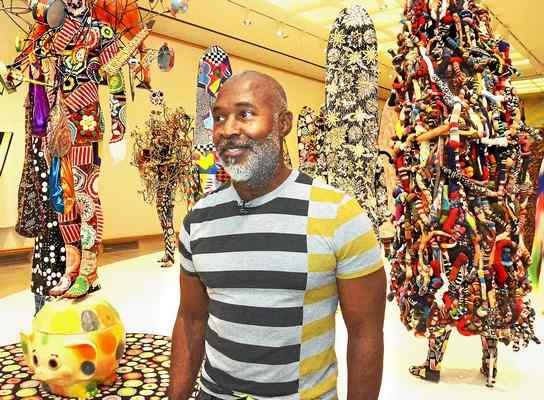 A new exhibition at Cranbrook Art Museum features a collection of more than 30 sculptural Soundsuits by Nick Cave, an artist whose reputation has steadily grown in recent years.

Sometimes confused with the Australian musician who shares his name, Cave earned a graduate degree from the Cranbrook Academy of Art in Bloomfield Hills in 1989. Now chairman of the Fashion Department at the School of the Art Institute of Chicago, he’s known for his elaborate costume/sculptures. Once trained as a dancer with Alvin Ailey in New York, he uses the Soundsuits in performances art pieces.

Cave, who works with found objects such as discarded clothing, said the idea for his first Soundsuit came in 1991 when he was walking through a park. The Rodney King riots were on his mind as he bent down to pick up a stick.

“I began to wonder what it was like to be dismissed and discarded,” Cave told The Oakland Press. “I am interested in the surplus of excess and renegotiate it within the work.”

He imagined an emotional shield to protect one’s race or gender, but Cave also was inspired by garb worn by priests and witch doctors. “There is a reference to historical, ceremonial and ritual,” he said. Another influence was Cave’s youth in St. Louis. Mo.

“I was one of seven siblings,” he said. “Even a hand-me-down I restructured and redesigned so it became mine. It was the beginning of that mindset.”

The Huffington Post named Cranbrook’s “Nick Cave Here Hear,”  as one of the top five shows to see this summer.

Cave’s Soundsuits are bright, other-worldly wearable fabric sculptures. Eleven of the Soundsuits will be on display at Cranbrook for the first time beginning Saturday, June 20. The Museum’s North Gallery is devoted to a newly commissioned installation of nine black-and-white Soundsuits, surrounded by a new wall-based tapestry inspired by Cave’s childhood fascination with the night sky, exhibition organizers said.

One gallery will feature a selection of his recent wall-based artwork, video, and sculpture, including a new work inspired by the death of Florida teen Trayvon Martin.

A separate room, the “Map in Action” room, will serve as a hub for the Detroit Performance Series and display Soundsuits that will come and go to performances throughout the city. Video footage of the performances will be added to the room through the duration of the show as a living document of the project.

Laura Mott, Curator of Contemporary Art and Design at Cranbrook Art Museum, said the exhibition is Cave’s first solo show in Michigan, and for him, it was critical to involve the city in the project.

Cave has said the time he spent at Cranbrook and in Detroit was critical to his growth as an artist. He plans to use his time in Detroit to engage people in a philosophy he calls “collective dreaming.”

He described the idea in a 2013 Interview magazine feature: “I was really thinking of getting us back to this dream state, this place where we imagine and think about now and how we exist and function in the world. … I think we tend not to take the time out to create that dream space in our heads.”

Cave plans to design dance labs in partnership with the Museum of Contemporary Art Detroit, and work with LBGTQ young adults from the Ruth Ellis Center in Highland Park for a performance called Up Right: Detroit. He also plans a project with students from the Detroit School of Arts and the Detroit Riverfront Conservancy for Heard Detroit, a procession of 30 life-size horse sculptures paraded by 60 high school dancers along Detroit’s riverfront on Sept. 26.

Cave’s project will culminate in October with Figure This: Detroit, a massive public performance at Masonic Temple on Oct. 4. 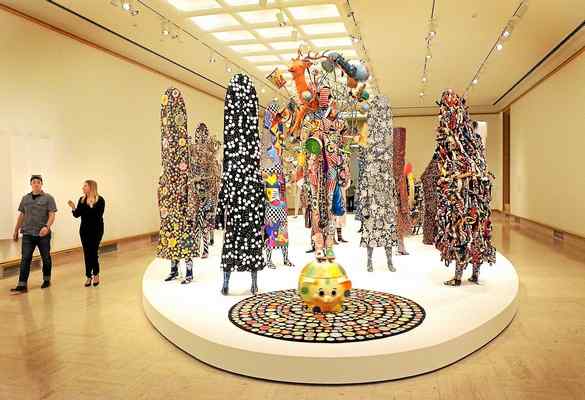 Source: The Oakland Press, The Macomb Daily, The Daily Tribune