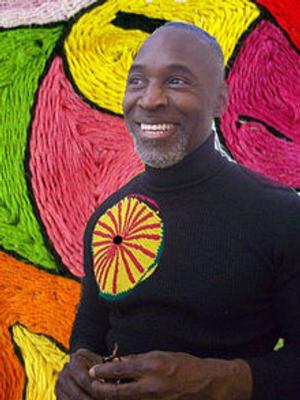 Colorful, inventive and captivating are but a few of the words to describe Nick Cave’s bold new exhibit, “Here Hear” at the Cranbrook Art Museum going on June 20 through October 11, 2015. Join Detroit Public Television (DPTV) as we bring this incredible exhibit and various related events, including Cave’s visit with students at the Detroit School of Arts to our viewers on-air and online.

The show, which is the largest of the American artist’s work to date, includes a collection of approximately 30 sculptural Soundsuits in the main gallery arranged in a dynamic vignette. It also includes a room of seven newly commissioned artworks surrounded by a new site-specific wall-based tapestry inspired by Cave’s childhood watching the night sky. An additional gallery will feature a selection of his recent sculpture work and a separate area will display the artist’s video work. Finally, the “Map in Action” room will serve as a hub for the Detroit Performance Series and display the wearable Soundsuits that will come and go to performances throughout the city of Detroit.

The exhibit will kick off June 20 with a series of events that runs through the rest of the year. Among the Cave-planned celebrations are a performance called Up Right: Detroit and a series of Dance Labs, both in July; and a procession of dozens of Cave’s life-size horse sculptures traipsing through the city on September 26. All this will then culminate with a project called Figure This: Detroit, which will take place at the Masonic Temple on October 4.

Here’s a link to the full segment we’re using to kick off the exhibit: https://youtu.be/29OZwOAIhG4

And, a link to the full story on Detroit Performs: http://www.detroitperforms.org/2015/06/dptv-partners-with-cranbrook-to-promote-nick-cave-here-hear-exhibit/

Here’s a short promo that is very shareable: https://youtu.be/qwfE_LVaCX4

Nick Cave is an artist, educator, and foremost a messenger, working between the visual and performing arts through a wide range of mediums including sculpture, installation, video, sound, and performance. He is the recipient of numerous prestigious awards, including the Joan Mitchell Foundation Award (2008), Artadia Award (2006), the Joyce Award (2006), Creative Capital Grants (2002, 2004, and 2005), and the Louis Comfort Tiffany Foundation Award (2001). Cave, who received his MFA at the Cranbrook Academy of Art in 1989, is Professor and Chairman of the Fashion Department at the School of the Art Institute of Chicago.