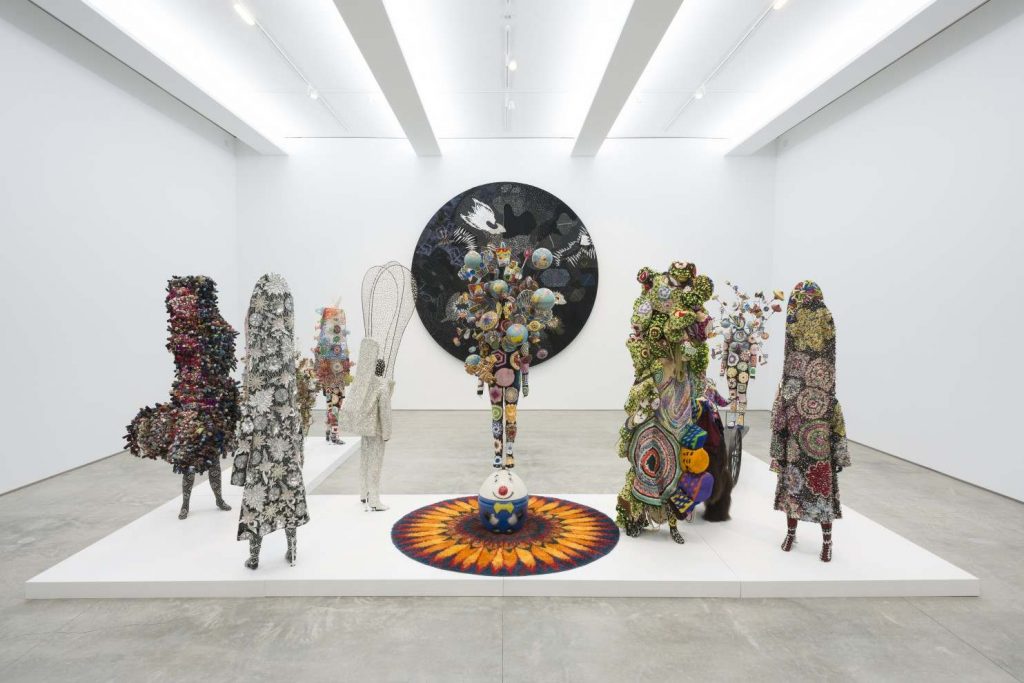 CHICAGO — Until he went to art school, Nick Cave considered himself an artist first and a black artist second.

Then he showed up at Cranbrook Academy of Art outside Detroit in 1986 to get his MFA and discovered he was the only minority student on campus. In an instant, his perspective fundamentally changed.

“I literally was in a state of shock,” he says. “It was the first time I ever had to deal with my race and to think of myself as a black male.”

As a celebrated alumni, he is returning to Cranbrook this summer and fall to rectify the isolation he felt nearly 30 years ago with hopes to inspire and influence young black artists throughout Detroit. There will be an exhibition of his work — colorful masked and wearable sculptures he calls “soundsuits” — which is serving as the first phase of a six-month series throughout the city that will involve coordination and partnerships with schools, cultural centers, dance companies, businesses and museums for performances and other events that will take place on the street, in classrooms and theaters, and along the riverfront. These are not arbitrary art events but instead will bear the signature of Cave’s work: colorful, musical, involving grand theatrical performances that address diversity through empowerment

“I’m trying to find a creative vehicle I can draw one into looking at gender, race and class,” he says at his home in Chicago. “But underneath it, it’s very dark.”

Coming out of the dark
Detroit understands dark. It is in the process of emerging from what is the largest municipal bankruptcy in U.S. history after years of mismanagement and fraud at city hall, the ushering of recent mayor Kwame Kilpatrick to federal prison for racketeering, and a systemic population loss and subsequent diminishing tax base that has left major swaths of the city barren without jobs or much hope they will return.

There are flickers of change: Gentrification is livening up areas downtown and in bordering neighborhoods with new businesses and Mike Duggan, the current mayor, has made blight eradication and improved infrastructure priorities that are already taking shape. Local private investors are buying much of the city’s decaying commercial properties and promising renewal. This includes Dan Gilbert, the owner of Quicken Loans, who has invested nearly $2 billion downtown and relocated his company there and is actively encouraging others in his position to do the same.

Affordable housing has resulted in an incoming stream of artists and other creative types who are helping nudge the city back on the creative map. Population loss is even slowing: Data from the Census Bureau show a 1 percent drain between 2013 and 2014, which is half what it was a decade earlier.

Cave’s presence in Detroit this year is seen as validation that the city is once again a creatively vital place to make art. That is suggested by the investors behind the scenes: After a $150,000 matching grant by the Knight Foundation, all the major philanthropy organizations in the area have followed suit to sign on as sponsors, including the Ford Foundation and Gilbert’s Quicken Loans.

“Detroit is like a bird that has been in a cage too long,” says DeLois Cooke Spryszak, the principal of the Detroit School of Arts, a public high school. “Our time was shuttered away and hidden.”

Nearly 100 students at Spryszak’s school will participate in a Sept. 26 event along the riverfront that will involve a processional of dancers, musicians and nearly 30 “life-size horse sculptures.” Spryszak says the experience working with Cave and his staff shows her students “their creativity and talent can take them somewhere.”

“Ten years ago, the name Detroit didn’t open the doors that it used to. With the new economic boom, there’s a resurgence of interest in what happens in Detroit,” she says.

Always creating
Cave, 56, is conditioned to do things rather super-sized. Based in Chicago, he employs 10 full-time employees and is recruiting 20 more this year to build soundsuits and other objects he plans to tour in different configurations over the next five years. Next year he will move his operation from a loft building in the city’s South Loop neighborhood downtown to a 20,000-square-foot building complex on the Northwest Side where he will house an art gallery, performance space, photo studio, a shipping operation, his work facility and living quarters. It already has a name: Facility.

“It will be this cultural incubator that will always be in flux,” he says.

He has always been making things. He grew up in Columbia, Mo., where he was drawn to art and encouraged. “My mother always allowed us to build our identity as we were growing up and with that kind of liberation, we could slowly find our interest in whatever we were interested in,” he says.

He graduated from the Kansas City Art Institute in 1982 where he already showed signs he was not interested in a single discipline, but several. There he experimented with textiles and sculpture and, outside school, studied dance at a program run by the acclaimed Alvin Ailey American Dance Theater.

Then he saw the Rodney King video. Just before his first job, teaching at the School of the Art Institute of Chicago, news broke that King, a 25-year-old black man was severely beaten by Los Angeles police officers after a high-speed chase, a 1991 incident caught on tape that launched rioting in many cities and forced a conversation on race and police brutality that is familiar today.

Cave says the incident left him stunned and depressed. “The images were so profound. I could be racially profiled. Even today,” he says. He wanted to find a way to express that vulnerability, but it would take a walk in the park the next year for that to be revealed.

He moved to Chicago in 1992 to accept the teaching position at the School of the Art Institute. Sitting alone in Grant Park, he noticed twigs on the ground. He collected more of them and brought them home and built a sculpture. Once it was complete, he put it on and he started to move. Bound together, the frail materials sounded menacing. Adorned from head to foot, he looked larger than life. In an instant, Cave had created a symbol of self-protection. The wearer’s skin color, gender and even sexual identity is unrecognizable while masked, and the grandeur of the garment itself — the wild colors, sounds and discarded materials like metal toys or human hair — allows for a level of empowerment for users that they may not feel in a normal setting.

Cave says the suits reflect his interest in being “an artist with a civic responsibility,” which he says has become more important to him in a climate when racial tensions are high because of the recent deaths of unarmed black men at the hands of police. One work, commenting on the death of Florida teenager Trayvon Martin, features a figure who resembles the boy in the now-iconic hoodie but whose movement is ultimately restricted.

“I’m an artist with a conscience,” he says. “How can we take what is negative and, rather than burning down a building or looting, how can we turn that into something positive? How can [the soundsuits] be a way of unifying?”

He sells them in a gallery in New York City but they are also used for choreographed dance performances meant to create spectacle. One of his largest was performed at Grand Central Terminal in New York City in 2013, and will be reimagined in Detroit with the Detroit School of Arts students.

Laura Mott, curator of contemporary art and design at Cranbrook’s museum, says she first saw Cave’s work in Gothenburg, Sweden, where she noticed that audiences were not just enthralled by the colors and imaginative design, they were also taken by the emotional stories they told about racial profiling and knee-jerk assumptions about race and identity.

“It didn’t matter about the people, their country, or their background, everyone had a relationship to this work,” she says. “And within conceptual art, that is always a challenge.”

When she arrived in Detroit in 2014, she went to Chicago to meet Cave and propose an exhibition. He agreed but wanted to expand the outreach to the city’s neighborhoods. Soon, the project became more ambitious and more people piled on from different quarters to participate. “We dreamed of this as a big project and said if we’re going to do something we want this to make an imprint on the city,” she says.

While his staff is busily preparing and shipping soundsuits to Detroit and he is coordinating a team that will be on site throughout the summer, he is also in the midst of preparing for a 2016 exhibition at the Massachusetts Museum of Contemporary Art in North Adams where he will create an “immersive kinetic work” in a space he describes as the size of a football stadium. He is still considering the possibilities.

“I’m thinking very differently about it,” he says. “What will I make that is going to be a draw, that people are going to say ‘I must go’?” 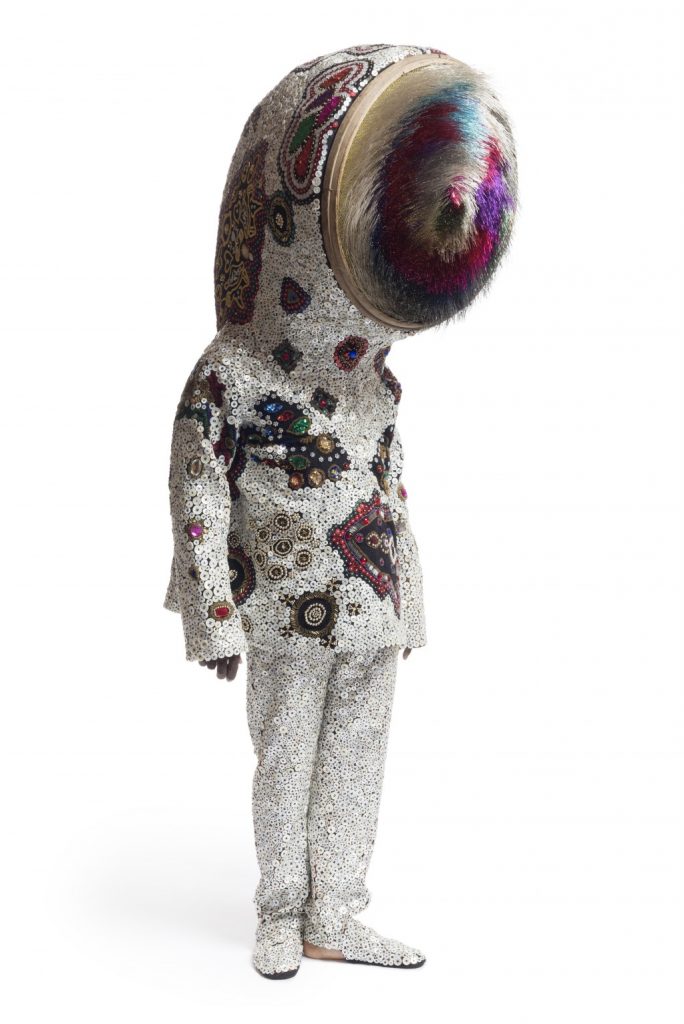