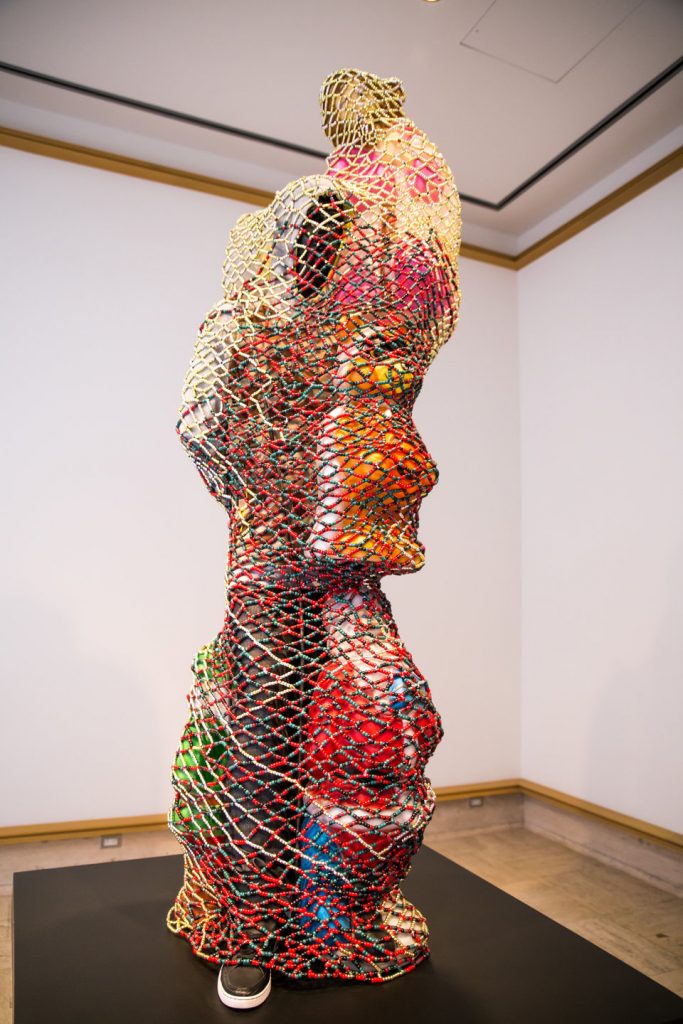 Behind what appears to be a beaded net stained the color of Skittles stands a hollow figure, made distinct by the hint of a sneaker sticking out from under the obscurity. Pan up from the shoe and there’s a glimpse of a hooded sweatshirt topping off the towering statue, an unmistakeable bit of clothing loaded with meaning.

Titled “TM 13,” the work — shown above — memorializes the death of Trayvon Martin, the unarmed Florida teenager who was fatally shot by former neighborhood watch leader George Zimmerman three years ago. Created by Missouri-born artist Nick Cave, the piece is currently on view at the Cranbrook Art Museum, located just outside of Detroit, Mich.

The sculpture echoes the artist’s first “Soundsuit,” a wearable work of art made in 1992 after the brutal beating of Rodney King in Los Angeles. Composed of a sheath of twigs that rustled as the wearer moved, Cave imagined the piece in a state of confusion over a tragedy that would spark riots across L.A. Decades later, and nearly 500 soundsuits since, Cave — like much of the nation — is again confused in the wake of the deaths of Martin, Michael Brown, Eric Garner, Freddie Gray and the mass shooting at Emanuel African Methodist Episcopal Church in Charleston, S.C.

“The underlying history of my work has [addressed] the political realms of black identity,” Cave said in a phone interview with The Huffington Post. “This is me now looking and responding to the state of affairs. Now we can talk about Charleston and the ongoing concern around race and identity and profiling today.”

“TM 13,” like many of the other suits — not to mention tapestries and video works presented as part of the larger exhibition “Here Hear” — beckons viewers to imagine what it would be like to don the empty shell. How would it feel to step inside the behemoth sculpture and peer out from beneath the very same rainbow-hued trap? The show’s homonymous title itself hints at more than a passive audience. “It’s like I’m calling court,” Cave explained. “Gathering people around and isolating their attention.”

Beyond the works on view at Cranbrook, Cave’s own alma mater, the artist is staging a series of interventions around Detroit, including dance labs and performances meant to further gather people together in the name of art. Cave describes the city he once called his home-away-from-home (Cranbrook provided him with “intellect,” while Detroit gave him “soul,” he clarified) as vibrant and alive, but notably different from when he last attended school in 1989.

“This time around, there’s a stronger sense of investment of individuals [in the city],” he noted. “A lot of creative individuals coming in, locating neighborhoods they want to change, coming together to reinforce the community. There’s a sense of urgency about it. We’re all reintroducing Detroit back to Detroit.”

He likened contemporary Detroit to a forest. A forest, he said, can burn down, but after that fire, little green growths endure, peeking out from behind the ash. Of course, Detroit’s fire took the form of bankruptcy in 2013. But little by little, Cave is noticing a rebirth. “The green [in Detroit] is that real,” he said, crediting the city’s noticeable rejuvenation to an explosion of little growths like restaurants and art endeavors. “Almost florescent.”

In fact, Cave is full of comparisons. While Detroit is a forest, his show, he says, is like a collective dream. As a kid, Cave and his six brothers would lay on the grounds of their farm, looking up at the sky and identifying star patterns, letting their minds drift into an imaginative state. “Here Hear” aims to bring Detroit and its surrounding areas into one shared imagination,

“I’m always looking for individuals to engage in an exhibition. I’m trying alternative ways of talking about hard issues us as Americans are dealing with and struggling with,” Cave concluded. “I’m hopefully acting as the change agent, finding a way to infiltrate a city and… talk as a collective about what’s going on in the world.”