For Detroit Artists, Almost Anything Goes | The New York Times 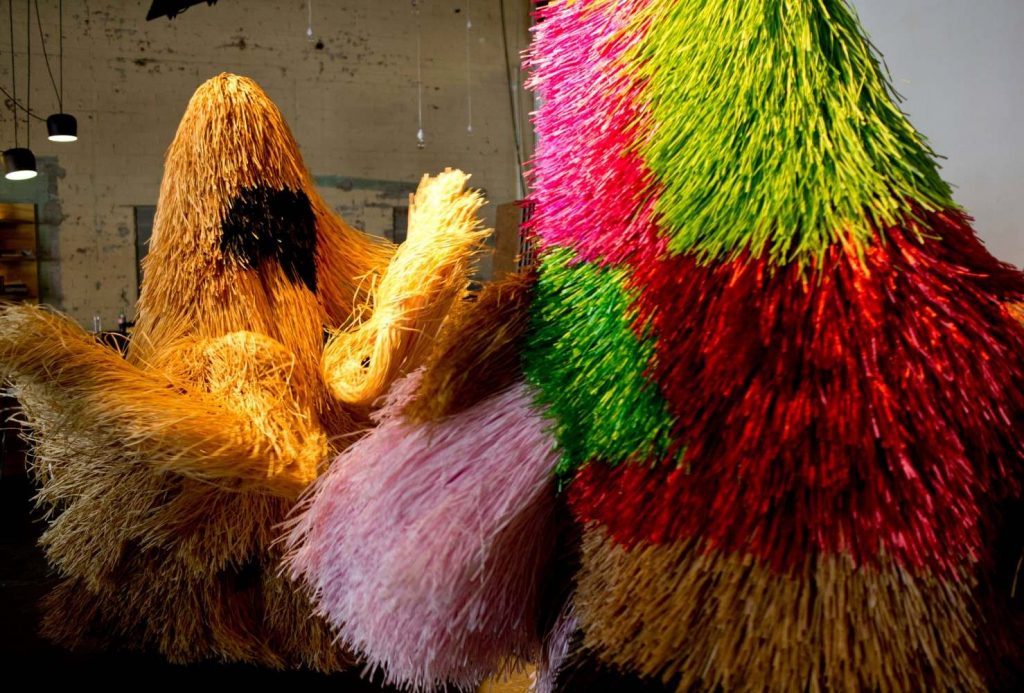 “Can you move?” the choreographer, Marcus White, asked Mike Springer, tall as a spruce in his raffia costume.

Mr. Springer spun and jumped, releasing a wave of rustles and swishes.

Mr. Cave and Mr. White’s collaboration will be staged on Sunday at the Ruth Ellis Center, which serves homeless and lesbian, gay, bisexual and transgender youth. The idea, Mr. Cave said, was to get “outside of the conventional ways of how we see performance and where we go to view performance.”

Public art has long had a home in Detroit, with its expansive vacated spaces and ambitious class of D.I.Y. makers. But lately, the back-lot murals, pop-up sculpture parks and boundary-crossing performances are increasing, as old-guard artists find new outlets and resources, and younger artists arrive overflowing with ideas. Last year, the John S. and James L. Knight Foundation gave a grant to Olayami Dabls — a patriarch of the Detroit cultural scene who founded Dabl’s Mbad African Bead Museum, in northwest Detroit — to maintain the art park around his small outpost.

In a city with a community-minded, congenial gallery scene and relatively few collectors — where art sales, in other words, are hardly a driving force — turning a house into a canvas or a sidewalk into a stage fulfills everyone’s creative appetite. In September, a mural festival will begin in Eastern Market, the historic food hall. Even a recycling center here is filled with paintings.

“We see it in new neighborhoods; it does seem to be multiplying,” said Katy Locker, the program director for Detroit at the Knight Foundation, which also provided $150,000 to the Cranbrook Art Museum for Mr. Cave’s own Soundsuit “invasions,” as he called them, in city landmarks like the Art Deco Fisher Building. (Performances and a museum exhibition run through early October.)

Mr. Dabls is expanding his art park in the tradition of Tyree Guyton’s Heidelberg Project, which transformed derelict houses into open-air sculpture. There’s a three-story house covered in mirrors and a found-art assemblage, “Iron Teaching Rocks to Rust.” Mr. Dabls started the project 14 years ago, illegally appropriating land and buildings; the city granted him ownership in January. There’s no entrance fee; visitors come from all over the world.

“I took a different approach to art and museums, and it works,” said Mr. Dabls, 66, who is also a Kresge Foundation fellow. “What it has suggested to people who come here is, you can pretty much do what you want. You don’t have to start from the top.”

Robert Sestok, who created the City Sculpture park, at his outdoor studio space behind his home in Detroit. Credit Laura McDermott for The New York Times
Last Friday, he visited a fellow stalwart, Robert Sestok, who was inaugurating his new sculpture garden behind his own home and studio. Mr. Sestok, 68, installed 29 of his welded sculptures in a former empty lot in Midtown, next to several abandoned buildings.

“In a city like Detroit that has so many challenges, in a scene of what some people would see as blight and disinvestment, public art, the expression of creativity, allows a community to take pride,” Ms. Locker said. “Nick Cave’s work and Dabls’ work and the sculpture garden are all representative of this,” she added. “Most of the art that we see being celebrated now feels really authentic to Detroit.”

Laura Mott, the curator of Nick Cave’s exhibition at the Cranbrook Art Museum, with pieces for the dances. Credit Laura McDermott for The New York Times
Mr. Sestok’s park, City Sculpture, is the culmination of a career that pivoted around Detroit. Reared in its suburbs, he moved back in the 1960s, affiliating with the Cass Corridor artists, named for a then-dangerous corner of town. (Near Wayne State University, it has since been cleaned up and rebranded Midtown.) They had an artist-run gallery — a dozen partners, a dozen shows a year — and flourishing practices. Like others, Mr. Sestok briefly decamped to New York, following the artist Kiki Smith, who was his girlfriend at the time. But “I couldn’t acclimate myself,” said Mr. Sestok, who now lives in a rambling, art-filled house six blocks from where he was born. He refurbished it himself and added a separate studio, built in 1985 with an N.E.A. grant. Until about 12 years ago, he sustained himself by rehabbing houses. His sculptures — abstract, tall industrial pieces incorporating materials like propane tanks and shovels — dot the city and suburbs.

“In the last decade or so, he’s really found his voice,” said Dennis Nawrocki, an adjunct professor at Wayne State and the author of “Art in Detroit Public Places.” Mr. Sestok had the idea for a sculpture park about three years ago, he said, as he was mowing the lawn in a deserted field. He bought the property for $18,000, scored a small grant and sold off some work to pay for the park, which cost about $50,000. At 17,000 square feet, it “showcases the bigness of what I can do,” he said. He has started a nonprofit and hopes to exhibit other artists there; the opening party, with food trucks and a nine-piece rock band playing on a flatbed truck, drew Cass Corridor artists from New York as well as Detroit’s younger generation. “You can’t really be around here as an artist and not know who Bob is,” said Jonathan Rajewski, 28, a rising painter whom Mr. Sestok mentors.

Though Detroit emerged from bankruptcy late last year, and municipal services are improving, the city is still operating at a deficit. But Mr. Nawrocki said signs of the long-promised renaissance were materializing. “The city has this momentum now that kind of rolls over everyone,” he said.

That’s the vibe Mr. Cave got, as he visited Detroit to prepare for his exhibition at Cranbrook — a 30-minute drive away but in spirit, another galaxy — in the affluent, manicured suburb Bloomfield Hills. The clubs and art scene of Detroit sustained Mr. Cave, he said, when he was the only black graduate student at the Cranbrook Academy of Art in the 1980s. “Cranbrook provided me the intellect, and Detroit provided me the soul,” he said. He credits his time there with giving him the foundation to address race: his first Soundsuit was about Rodney King; his latest is inspired by Trayvon Martin.

The artist Olayami Dabls transformed this house, once abandoned, into part of the MBAD African Bead Museum. Credit Laura McDermott for The New York Times
The free performances are his way of giving back to the city. For local artists, the attention is welcome. “People often use the word ‘revitalization’ in Detroit, but I think of resilience,” Mr. White, the choreographer, said.

“The thing I love about Detroit — if you want it done here, you have to do it,” he added. “You have to work. 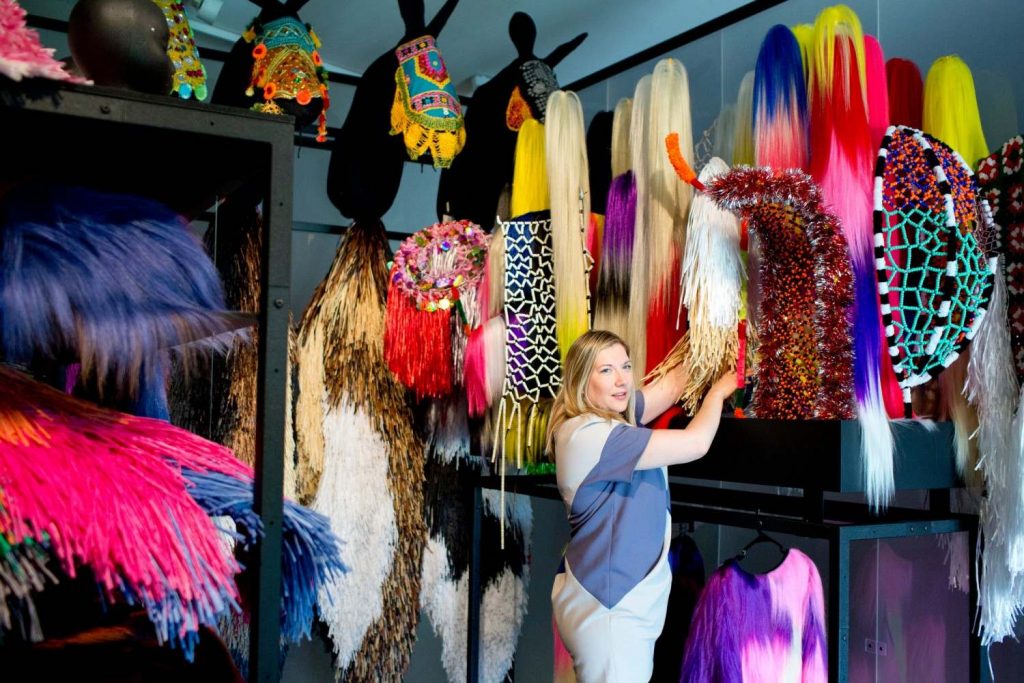 Laura Mott, the curator of Nick Cave’s exhibition at the Cranbrook Art Museum, with pieces for the dances. Photo by Laura McDermott for The New York Times.