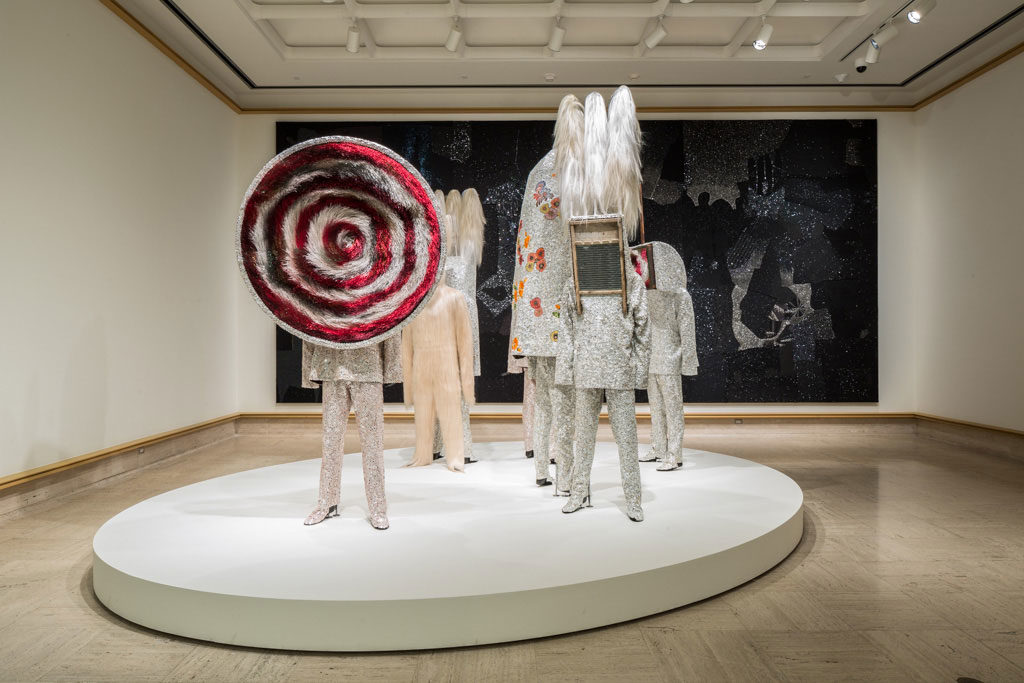 by Wendy Vogel, Art in America

A recent splashy headline in the New York Times style section proclaimed Detroit “the last stop on the L train.” The article was one of several lifestyle dispatches the paper has published touting the economically depressed Midwestern city as a destination for young creatives disillusioned by the high rent, cramped spaces and rampant gentrification of New York neighborhoods like Bushwick, Brooklyn. “Here Hear,” an exhibition of Chicago-based artist Nick Cave’s work at the Cranbrook Art Museum in Bloomfield Hills, Michigan (through Oct. 11), shares the Times’ optimism about Detroit’s potential. Known for his vibrant aesthetic combining the disciplines of fashion, craft, performance and fine art, Cave has expanded his practice to include public engagement and performance. For the Cranbrook show, Cave has taken take the city of Detroit as his muse, creating his most ambitious series of programs to date intended to engage citizens. Rather than import change from the outside, Cave’s show is offered up as a model for considering artists’ responsibility to place.

“Here Hear” marks a homecoming of sorts for Cave, a 56-year-old Missouri native who received his MFA at the Cranbrook Academy of Art in 1989. As the only matriculating African-American student in the program, Cave divided his time between the pastoral campus in the affluent suburb of Bloomfield Hills and the city of Detroit, where he sought out the black community and the city’s vibrant dance, music and fashion scenes. His exhibition at the museum on Cranbrook’s grounds is anchored in the formative commute between Bloomfield Hills and Detroit, where a series of public events are being staged throughout the show’s run.

This link forged between the museum and city carries symbolic weight: Detroit continues to rank high on the list of America’s most segregated cities, and Bloomfield Hills’s wealth stands in sharp contrast to the inner city’s continued financial difficulties. Cranbrook’s curator of contemporary art and design Laura Mott, who organized the show in close collaboration with Cave, told A.i.A., “I’ve never felt a sense of responsibility like I do here.” (She previously held curatorial jobs in New York, San Francisco and Gothenburg, Sweden.) She added that in organizing the show, she and Cave agreed, “We had to have a conversation about race. It’s disrespectful not to.”

Cave’s work resonates powerfully with recent incidents of police brutality and racial violence. The Cranbrook Art Museum display comprises some 50 works, including more than 35 of his well-known “Soundsuits.” Made of colorful fabric and found objects, from buttons to sticks to lawn ornaments, the wearable creations are named for the rustling noises they make when worn. But beneath the opulent aesthetic lies a deep engagement with identity politics. Cave initiated the series in 1992 in response to the Rodney King beating by members of the Los Angeles Police Department. The artist describes the “Soundsuits” as a covering for vulnerable bodies—namely his own as a gay black man—and connects the sounds they make to the noise of public protest.

The exhibition also features a handful of Cave’s recent assemblages created from found objects and artifacts of black culture, including the figures of racial caricature known as blackamoors. Visually spare compared to the “Soundsuits,” these new works derive their impact from the juxtaposition of charged elements that continue to speak to the core themes in Cave’s work: adornment and cultural translation. One striking example, Sea Sick (2014), is composed around the figure of an exaggeratedly black-skinned, large-lipped screaming man’s head. Cave bought the object at an antiques market, where it was labeled as a spittoon. The horrific image is dwarfed by bronze replica of a ship above its head, bronze casts of hands on either side of the face, and around a dozen oil paintings surrounding it. In this work, Cave alludes to the violence of the slave trade and cultural appropriation. A work debuting at Cranbrook, TM 13, returns to Cave’s themes of the concealment of black bodies and their susceptibility to violence. An homage to the slain teenager Trayvon Martin, the work consists of a lifelike figure in a hoodie and childhood relics like stuffed animals, all enfolded in a net.

The additional components of “Here Hear” move the conversation from the museum to Detroit. These include performances engaging community partners, a variety of educational initiatives and a catalogue. On June 21, a well-attended kickoff event occurred at the Redford Theater and Artists Village in Brightmoor, a once-vibrant planned community for auto industry workers that is now battling blight. There, a screening of Cave’s videos was followed by performances featuring dancers in Soundsuits accompanied by local bands. Three “Dance Lab” performances in July bring together local choreographers and musicians to improvise with Cave’s Soundsuits in locations around the city, including the Ruth Ellis Center for LGBTQ youth. Later this summer the Ruth Ellis Center plays hosts to an event called Up Right: Detroit, conceived by Cave as an “act of initiation” involving participants from its program. In the fall, Cave stages Heard Detroit, a reimagining of his processional “Heard” project featuring dancers in Soundsuit horse costumes, with students from the Detroit School of Arts. A culminating event, Figure This: Detroit, takes place in the city’s sprawling Masonic Temple in October.

The show’s catalogue features 12 postcards on thick cardboard stock showing Cave posing in his “Soundsuits” in various locations across Detroit. Some of the sites are part of the programming for “Hear Here.” Other locations, like the MBAD African Bead Museum—a center for African material culture founded by Olayami Dabls—connect Cave’s aesthetic to established artistic practices in the city. Disguised in his Suit, Cave appears to almost to blend into the Bead Museum’s exterior ornamented with mosaics of tile, shards of mirrored glass and swirling paint.

Both the artist and curator agreed that Cave’s participatory projects could be considered social practice, though they might look different from other examples of the medium. “Social practice is sometimes considered divorced from craft and from aesthetics,” said Mott, acknowledging criticisms of the genre. “That becomes problematic for some artists. That is not a problem with Nick Cave.” The curator explained that Cave’s rich visual language serves as the cornerstone of the project, which aims to “galvanize a city and its residents and its creativity as a resource.” She added, “That’s the heart of social practice.”

Cave’s site-responsive project raises important questions about the notion of artistic responsibility in Detroit. How do artists address a city besieged by financial and social problems like the ones faced by this metropolitan area? The Times article would suggest that buying property in Detroit is itself a courageous and ethical act—not to mention an economically shrewd one. And indeed an uptick in Detroit’s population by artists eager to create new businesses and services would help to jumpstart the economic motor. But it is unfair to task creatives alone, particularly those new to the city, with revitalizing an area that has suffered for decades at the hands of government neglect, racist policies and the failure of the auto industry. It’s also worth remembering that the scope of Cave’s community project most certainly relied on the museum’s ability to leverage his reputation as an artist with an established market and critical imprimatur. The important takeaway of “Here Hear” rather lies in Cave’s intention to let Detroit hear itself across barriers of race, class and access. In the Times article, artist and activist Halima Cassells advises newcomers to the city, “You have to come into Detroit respecting the people who have been living here through all the city’s struggles.” Nick Cave’s show is one example of doing just that. 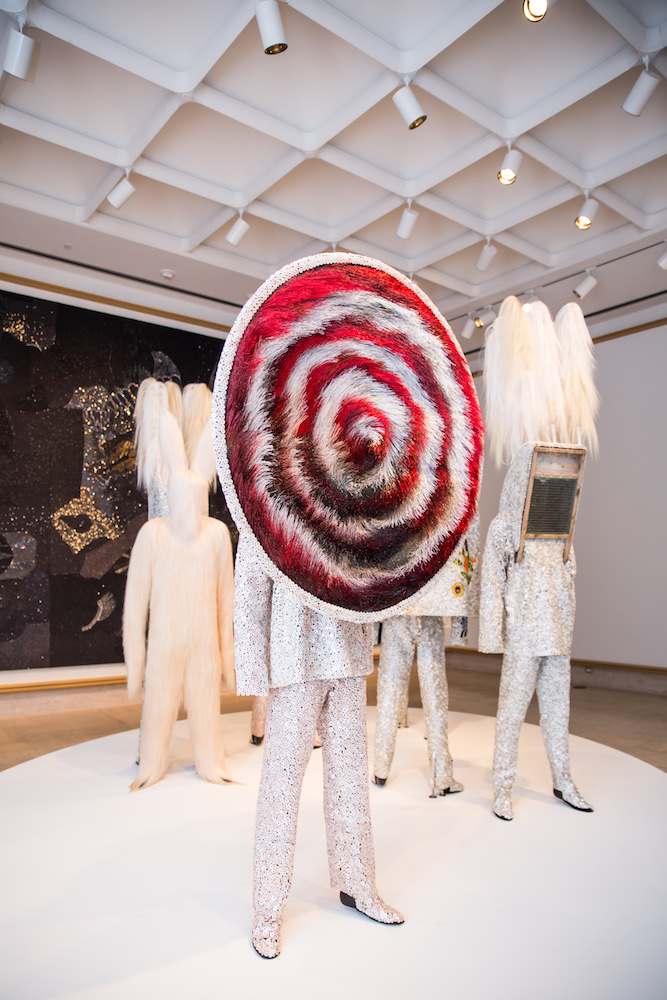 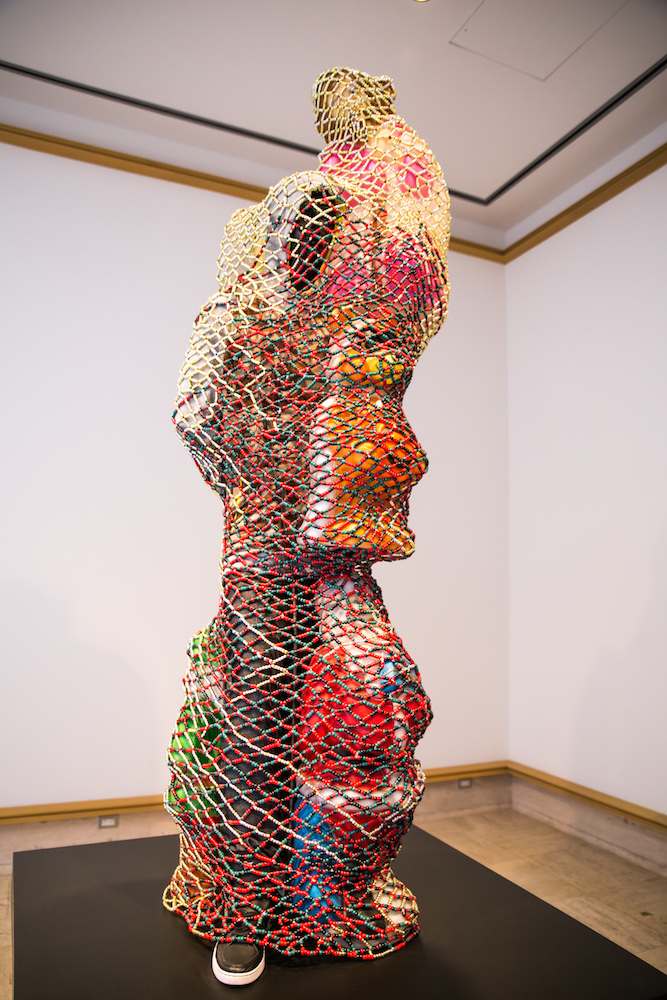 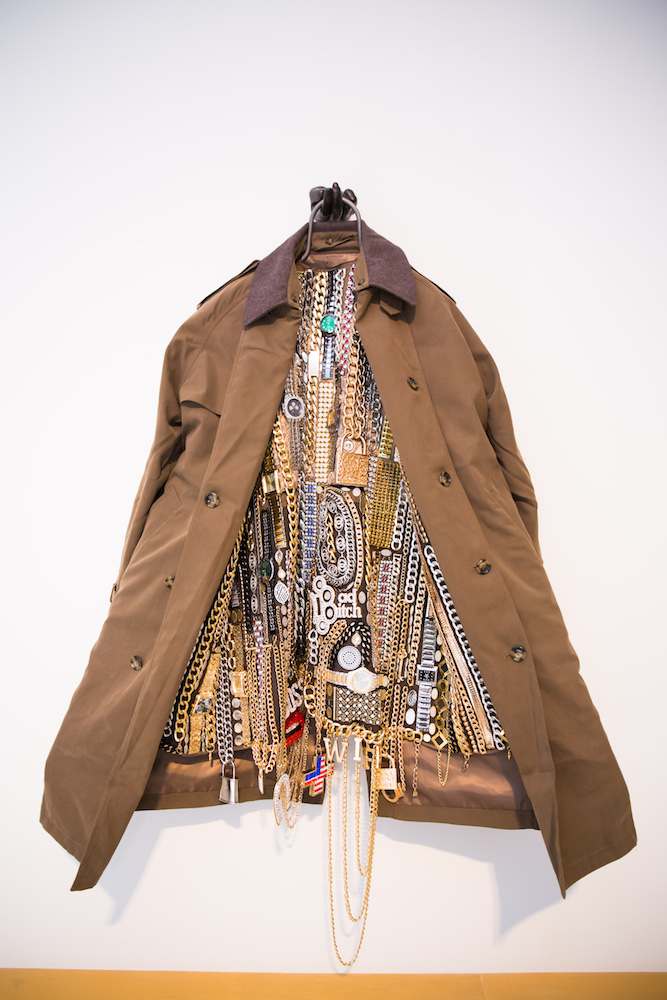 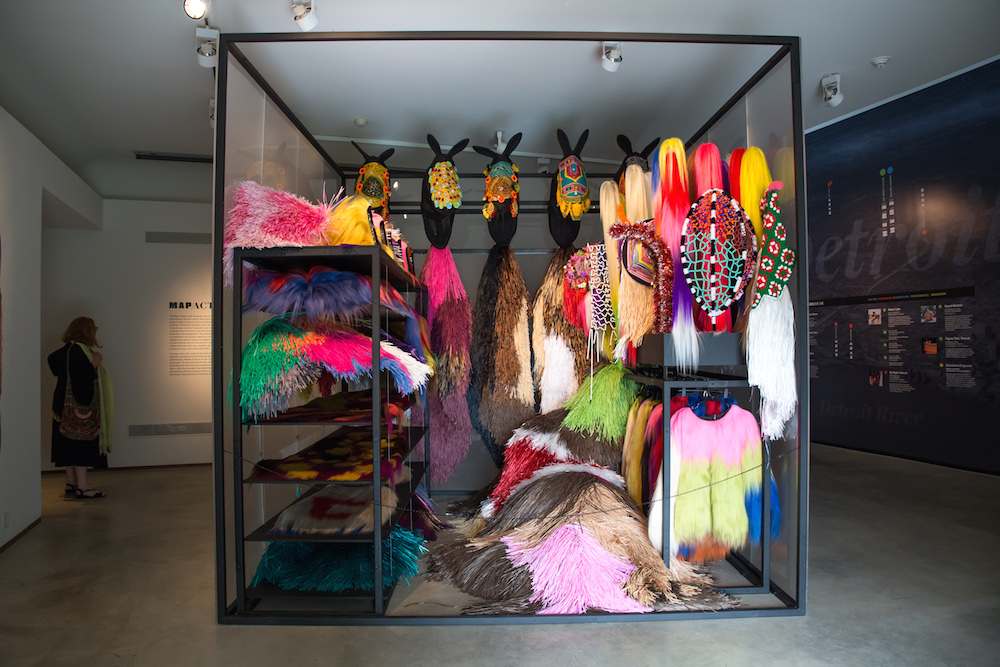 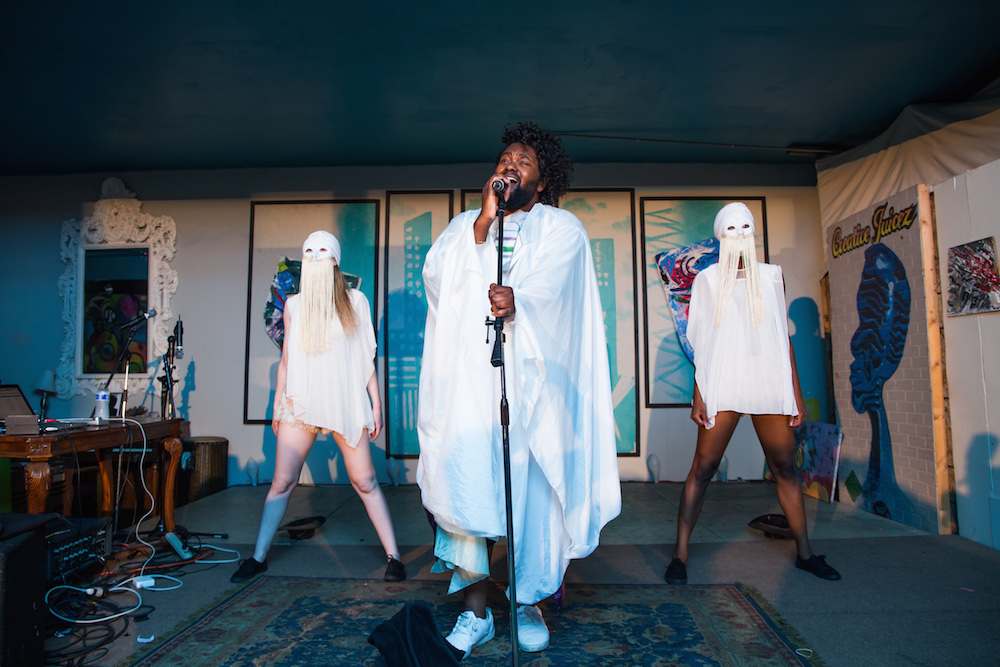