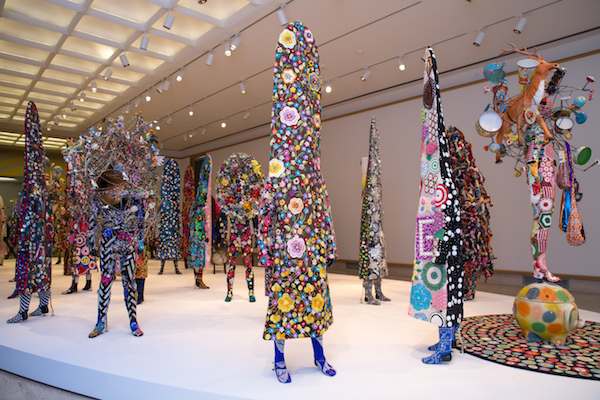 by Nick Cave, as told to Andrianna Campbell, Artforum

Nick Cave’s solo exhibition at the Cranbrook Art Museum, “Here Hear,” highlights the range of his multidisciplinary practice, from his iconic Soundsuits to newer sculpture, and also marks the artist’s return to a city that fostered his early practice. Organized in collaboration with the Museum of Contemporary Art Detroit, the Detroit School of Arts, and other community-engaged programs at the Ruth Ellis Center and the Detroit Riverfront Conservancy, the exhibition is on view through October 11, 2015.

by Nick Cave, as told to Andrianna Campbell, Artforum

DETROIT GAVE ME THE SOUL. It was a critical part of my education. When I was a graduate student at Cranbrook Academy, I learned so much, but it was in the house music dance community here in 1987–88 where I found myself. During undergrad, I had taken summer classes with Alvin Ailey in New York and I learned to dance. Coming from that training, I then applied it to my work. I’ve always looked at dance as an artwork where you are drawing in 4-D. By the time I moved to Detroit, I adopted a more improvisational approach to movement, one that was structured but responsive to constant transformation. Lately, it has become less about dance and more about movement in my work.

My Soundsuits are meant to be applied to the body. They evolved out of African ceremonial bodysuits, Haitian textiles, and carnival costumes from Trinidad. This exhibition is a city-wide intervention where I involved many collaborators as well as blurred the lines between audience and participant. For instance, I paired three dance companies with three musicians. In order to foster their involvement, I gave each dance company a box which held Soundsuits or other objects that could be used as attire. They had one week to develop a piece and the resulting works were then performed in nearby communities.

Once you are in a Soundsuit, you have to decide: What have I become wearing this coverlet that obscures my appearance as a human being? The first Soundsuit came out of a tragic event, the Rodney King beating. They became about opening oneself up to a change, an altercation, or transformation in dimension, form, scale, and weight. There is something there about allowing oneself to understand victimhood through masking and costume. After the Trayvon Martin incident, for instance, I finished a new piece titled TM13, which is in the exhibition at Cranbrook. Intended to keep the attention and conversation around race and equality going, the piece is of a boy—a black figure in a hoodie, jeans, and sneakers. He is surrounded by plastic molds of Santa Claus, the ones that are put out in people’s yards during Christmas. On his shoulder is a plastic angel figurine and the entire sculpture is covered in a beaded web. The boy is constricted, repressed, and limited in motion.

In preparation for the performances, I went into communities in Detroit that were hit hard by the recession, driving back there for the last four months and meeting with neighborhood committee members. I presented my intention to produce a wide range of cultural interventions that were meant to refuel and inspire the local population. For instance, in the Highland Park neighborhood, I worked at the Ruth Ellis Center. There, I involved dance groups to create Up Right: Detroit, a performance in which LBGTQ youth don ritualistic costumes before entering the city as cloaked figures. Their anonymity allows them visibility without censure. The audience who became active participants in Up Right: Detroit were split down the middle: Fifty percent came from the suburbs around the metropolitan area, and fifty percent from the neighborhood. Many were artists that are living in the city. Creative people have moved into these forbidden areas of city, off the beaten path, which has shifted the dynamics culturally. You can feel it; you can see it; it’s all happening.

There are so many people and even artists in this city that are disconnected from each other; they don’t cross paths. In conceiving of these creative performance jams, it becomes about reintroducing people to each other. The informal but planned artistic intervention into the fabric of city is very much like what house music did for me so many decades ago.