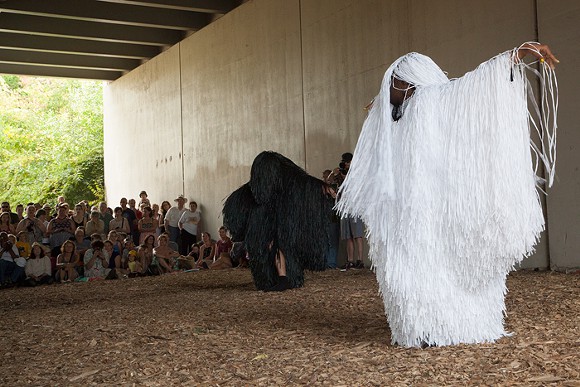 I stood at the entrance of the Dequindre Cut Lafayette Park overpass, a few steps away from the Mies van der Rohe Historic District where I reside. I looked over the small bridge into the Dequindre valley shortly after checking my iPhone for the time. It was 4:01 p.m. on a hot July Sunday in Detroit. A Nick Cave Soundsuit performance was set to take place in Detroit’s Dequindre Cut, a relatively new pathway where the city’s residents can run and jog at leisure.

Two figures in Cave’s handmade Soundsuits galloped down one of the entry ramps onto the Dequindre Cut; one in black and one in white, dancing angelically. The materials on the Soundsuit garments were draped effortlessly — like long, and thick strands of hair — as the dancers gracefully gallop up and down in the humid summer air. A live band playing “toy pop” lead by composer Frank Pahl preceded the dancers.

The two figures in black and white Soundsuits danced along the Dequindre walkway until they reached the underpass nestled beneath Lafayette Street, which was filled with a crowd of several hundred spectators. More dancers joined the two who began the performance. The additional men and women are dressed in tailored tuxedo shirts and leotards. The dancers, choreographed by performance artist Biba Bell, continue to perform on a makeshift stage made of wooden chips as they seamlessly infuse elements of modern dance, influenced by architecture, and visual art.

This performance is one of several, accompanying Cave’s Here Hear solo exhibition at the the Cranbrook Art Museum. Through an ambitious and groundbreaking series of Dance Labs and performances, Cave has intentionally “interrupted” a range of public spaces in Detroit — some blighted, some refined, yet all fitting for Cave’s homecoming of sorts back into the enigmatic city. The exhibition takes place 25 years after Cave’s final year in the Cranbrook Art Academy. The distinct contrast between Cranbrook’s suburban surroundings and Detroit’s authentic funk greatly informed much of his practice during the inception of his career.

The Soundsuit is a wearable sculptural work that was created in response to the Rodney King beating in Los Angeles in the early ‘90s. The horrendous incident was caught on tape, and when King’s assaulters received little to no penalty for their actions, a stream of disappointment plagued many black Americans.

What the King tragedy affirmed for African-Americans was the fact that black lives don’t matter to those who are put in place to protect them. For black people in America — particularly males — this evoked a sense of awareness of the black body and how vulnerable it can be to law enforcement. Cave was one of those black men, as a student at Cranbrook he opted to respond to the King beating through his practice by creating the Soundsuit — a ritualized form of garment-making and performance that reflects the manner in which black Americans can process susceptibilities and a means of protection against inevitable forces. “Sound” is a metaphor for the act of protest — to be heard you have to speak loudly, especially as a black person in America seeking social justice.

Detroit and its contrastingly adverse suburban surroundings served as the foundation for an exploration into Cave’s identity. He has revealed that as the only African-American within his class during his tenure at Cranbrook, it was the first time that he ever had to look at himself as a black male — an experience that was a struggle for him.

In the wake of a “renaissance,” Cave’s Detroit homecoming could not have come at a more appropriate time. Detroit is also going through an examination and transformation of self. While its identity has, in large part, been primarily African-American for the past couple of decades, the city’s sensationalized renaissance has begun to attract transplants from all over the world, from various ethnic backgrounds. Similarly, Cave has mentioned that he desires for his Soundsuits to diffuse preoccupations of race, class, and gender identities. He hopes that his presence in Detroit will contribute to its current vitality efforts by revealing the implications that come with interpreting different types of identities.

Also in this gallery is “TM 13 (2015),” an assembled homage to Trayvon Martin, the teenage African-American unjustly murdered in 2012 by a man who was later acquitted of the crime. The “13” represents the year in which the trial and acquittal took place. The installation consists of a life-size mannequin in a hoodie, sneakers, and jeans reminiscent of the outfit Martin was wearing when he was murdered. However, true to his practice, Cave shields the mannequin with a protective garment made of pipe cleaners. In the tightly woven net is a figurine of Jesus that rests along the upper left side of the mannequin’s frame.

Here Hear intriguingly interrogates the stigmas that revolve around identity and the ways those traditional normalcies can be combated. In a recent Detroit Public TV PBS feature on Here Hear, Cave discusses the goals for his work and his desire to eliminate prefixed perceptions of identity. “[With the Soundsuits] we’re forced to look at the work without judgement” says Cave. “We come to a point where we have to be open towards something that is unfamiliar.”

Cave’s sentiments on identity and muting certain identities speak directly to Detroit’s current social, ethnic, cultural, and economic demographic shift. “Something that is unfamiliar” — a testimony many native Detroiters share in response to the influx of transplants moving into their city. While many natives are resistant to the trendy migrants, Cave’s invasion into the city seems to be well-received. And not surprisingly so, since many of his efforts are organically benefiting organizations and communities that have gone abandoned or unnoticed.

It is obvious that Here Hear’s curator Laura Mott and Cave approached the exhibition and its programming while being mindful of the complex social climate in Detroit and how invading the city as an outsider can be problematic. Cave has performed in the city’s most blighted areas, such as the Brightmoor neighborhood and conducted subsequent programming within such neighborhoods to engage communities who may not have accessibility to his work in Cranbrook Art Museum. Additionally Cave has collaborated with organizations like the Ruth Ellis Center and the Detroit School of Arts to educate Detroit youth on his practice and the complexities of identity.

Through this thoughtful programming — and specifically, the collaborations with organizations and schools like Ruth Ellis and DSA — Cave and Cranbrook have made a conscious effort to ensure a space for black bodies in Detroit’s reimagined future. His presence in Detroit has been an intrinsic one, unlike many artists who have come in recent years to take advantage of a sensationalized city. It is clear that Cave is intentional on how he would like his work to impact Detroit. With phenomenal works, formidable engagement, and a progressive cause, Cave has left an indelible mark on the city of Detroit and its revival. 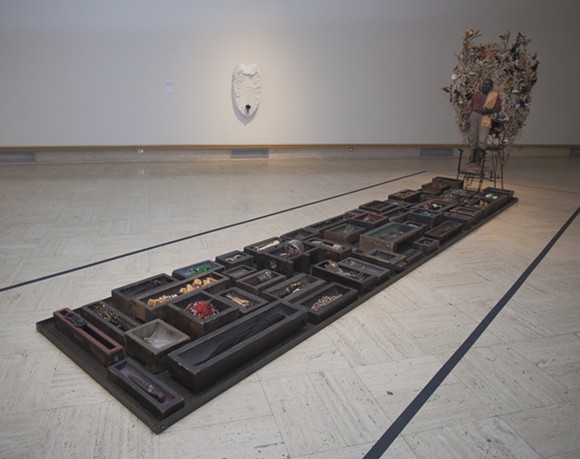 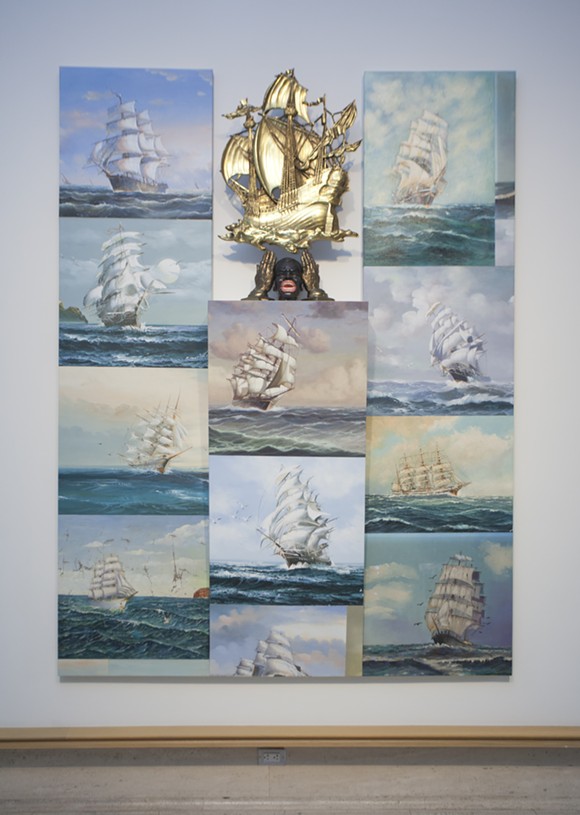