METRO DETROIT — Looking for a way to entertain the family during these last few days of summer vacation? We’ve got you covered.

Across metro Detroit, galleries and museums are hosting events and exhibitions to entertain and educate visitors of all ages.

Just in time to bid farewell to summer, Cranbrook Art Museum is getting ready to celebrate the close of its Michigan-made exhibit, “Designing Summer: Objects of Escape.”

According to Shelley Selim, assistant curator of the Jeanne and Ralph Graham Collections at Cranbrook, the show highlights the tradition of outdoor fun in Michigan during the summer.

“It all sort of materialized when we received a gift of 20 picnic posters designed by Steve Fryholm, who graduated from the (Cranbrook Academy of Art) and worked for Herman Miller,” she said. “(The posters) advertise the annual company picnic; they’re beautiful and incredibly graphic images of summer picnic food like sweet corn, grilled chicken, fruit salad and lemonade. They’re all silk-screened with flat layers of color. They’re just spectacular, and we thought we needed an exhibition for these.”

“Michigan has this long history of unionization, particularly in the auto industry. Because of these labor unions, things like the two-week summer vacation were able to be attained. Those cultural changes had an impact on design,” Selim explained. “For instance, the compact car — there were many things that led to the popularity of the compact car, but one of them is people wanted better gas mileage when road tripping became more popular in the 1950s.”

Also featured is the pop-up tent, which many of us use for camping, but was actually a novel invention more than half a century ago when Bill Moss, another Cranbrook alumnus, teamed up with a partner to create a lodging option better than the commonly used pup tent.

“Before the pop tent came along, it was just a pup tent, which was folded up pieces of canvas with stakes and really heavy rods and holes and ropes and pegs,” Selim said. “They spend 18 months working on the design, which is still used today with channels and flexible fiberglass rods that you can pop up in five minutes. It transformed camping.”

The exhibit closes at Cranbrook Art Museum on Aug. 30, a few months before a larger exhibition, “Nick Cave: Here Hear,” winds down this October.

The Detroit Institute of Arts just wrapped up a huge exhibit of its own. The much-publicized “Diego Rivera and Frida Kahlo in Detroit” show, featuring Detroit-centric pieces from husband-and-wife painters Rivera and Kahlo.

“It went really well. We had 179,051 people come to see (the exhibit), and that didn’t include about 280 refunds given to people who didn’t want to wait in the two-hour line the last day,” said Larisa Zade, senior communications specialist with the DIA.

But just because the popular exhibit has ended doesn’t mean there aren’t exciting events still happening at the institute, Zade said. Nearly every day of the week, there’s something new to see at the DIA.

“We obviously always have our permanent collection on view, with a lot of works to boast about,” she said. “But we’ve got various programs in the museum and on in the community.”

For instance, Zade said, visitors can always come down and try their hand at creating their own artwork during Drawing in the Galleries on Friday evenings and Sunday afternoons. Easels and drawing paper are set up in different galleries to provide inspiration for new works.

Throughout the week, the DIA offers drop-in art making classes for all ages, with new projects all the time.

One of the museum’s most popular events is Friday Night Live, a special evening of live music amid the DIA’s masterworks, with chances to enjoy food, cocktails and socializing at the end of the week.

“That’s one of our older programs, and it’s always well-attended,” she said. “Whether you’re on a date, with the family or want to come alone after work and just kind of decompress, it’s a nice night. The café is open, Kresge Court is open, and there’s a cash bar in the great hall.”

Music is on the agenda Sunday afternoons too during the Sunday Music Bar from 1-4 p.m. The more intimate sets give visitors the chance to enjoy smaller-scale performances at Kresge Court.

Add to that showings at the Detroit Film Theater, the institute’s famed Inside|Out program in communities around metro Detroit, lectures, and the new DFT film screenings at Huron-Clinton Metroparks, there’s always a chance to bring a little creativity to a family outing — either downtown or right in your own backyard.

Most of the programs are free, Zade said, noting that general admission to the institute is always free for residents of Wayne, Oakland and Macomb counties. 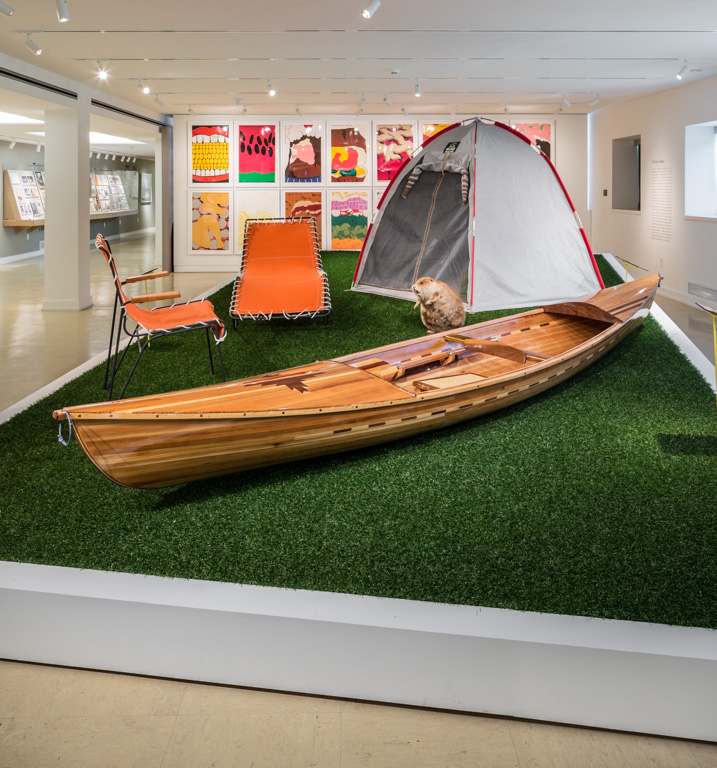 The exhibit highlights some of the summertime staples with hometown roots. Photo by R.H. Hensleigh, provided by Cranbrook Art Museum.