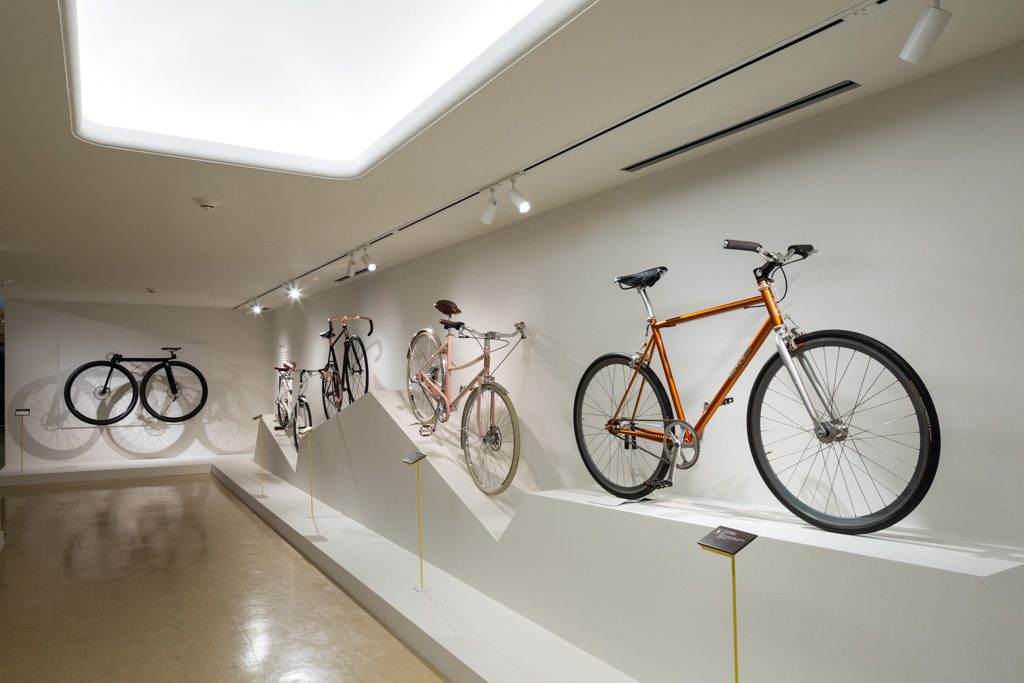 Whether along one of the Great Lakes, any of the numerous inland lakes, or the Detroit Riverfront, it is an undeniable fact that Michiganders spend their summer by the water. Going Up North is a standard phrase, and an even more common occurrence, whether for a long weekend or a week’s vacation. These locations epitomize the summer goal of escape, of leaving one’s cares (and responsibilities) behind. Designing Summer: Objects of Escape at the Cranbrook Art Museum through August 30th traces the evolution of the modern concept of summer vacations in Michigan, and how many of the objects that contribute to this notion of leisure time have their roots in Michigan.

Beginning in the 1950s, a road trip or a visit to a state park was an easy means of escape. Exhibition curator Shelley Selim notes that the mid-century “was a period when Americans had an unprecedented amount of leisure time that was continuing to grow, and it was an extremely prosperous time for America.” In an era where airline travel was a luxury, this was a boon to state tourism.

Michigan designers and makers forged their way in this field. With the growth of the suburbs in the 1950s and the introduction of the compact car, Selim describes that for “young families who needed a cheap and affordable means of vacation, taking a road trip became a very popular form of vacation.” In Michigan, that could mean just a few hours north to Traverse City or Charlevoix—many of the same destinations that are popular today were frequently visited in the mid-century. Their tourist economy actually developed in the 1880s, as the beautiful landscape was good for growing berries, but not much else. Thanks to the development of roads and highways, they solidified their spot as a tourist destination.

In addition to the automobile, Selim points out another notable vacation component with Michigan—and Cranbrook—ties. The modern Pop-Tent was designed in the 1950s by alum Bill Moss and was patented in Michigan. What used to be cumbersome, multi-piece objects were suddenly light and portable. Selim says, “It transformed the whole experience of camping. The Pop-Tent fit into a tiny bag that a child could carry, which made camping more accessible for families.”

Transportation today is epitomized in the exhibit with bicycles, displayed as if on a hilly terrain. It has been an especially interesting trend that in the Motor City, bicycle manufacturing is utilizing many of the skilled laborers who formerly worked on cars. Detroit Bikes are the only bikes officially manufactured in Detroit. Selim notes that “they assemble everything,” even repurposing a resin coating machine to paint the bicycles. While Shinola does not manufacturer bikes, they do assemble them, and their contributions to the Detroit design culture are included as well.

One cannot ignore the fact that today’s concept of vacation has drastically changed since the 1950s. Employees are notorious for not taking all of their vacation time, or staying plugged in to their email while away. Additionally, in the post-recession era, many freelancers and entrepreneurs do not have paid vacation at all, leaving them to fashion their own ways of leisure time. A vestige of this past can be seen in the 20 company picnic posters by Steve Frykholm from 1970 to 1989, a graphic designer at Herman Miller, which were a recent donation to the museum. These bold depictions of summertime barbecues evoke the whimsy of a carefree summer day that were sanctioned by the office.

Selim also found several ways to show the ways a rapidly urbanizing economy connects to the outdoors, including with a mobile produce cart used by D-Town Farm and the Detroit Black Community Food Security Network, designed by Fernando Bales, an alum of the Cranbrook Academy of Art. Selim speaks of it as the “21st century roadside food stand,” a way to bring the seasonal produce one finds on a country road, brimming with freshly picked corn and cherries, to the urban community. While the cart was at the museum during the opening, it is in-use throughout the summer; renderings of the design are on view in the exhibit.

Selim highlights the duality of today’s younger generations living in urban centers—as opposed to the suburbs their parents and grandparents settled in—but who are still drawn to nature. “I found myself and other people my age living in cities who have less resources to get away are macgyvering their own vacation time. It could mean a trip to the farmer’s market, riding a bike, or taking a short day trip, but you have these little moments of vacation, moments of escape, and that’s what the objects that we used in this design exhibition are really meant to embody.” 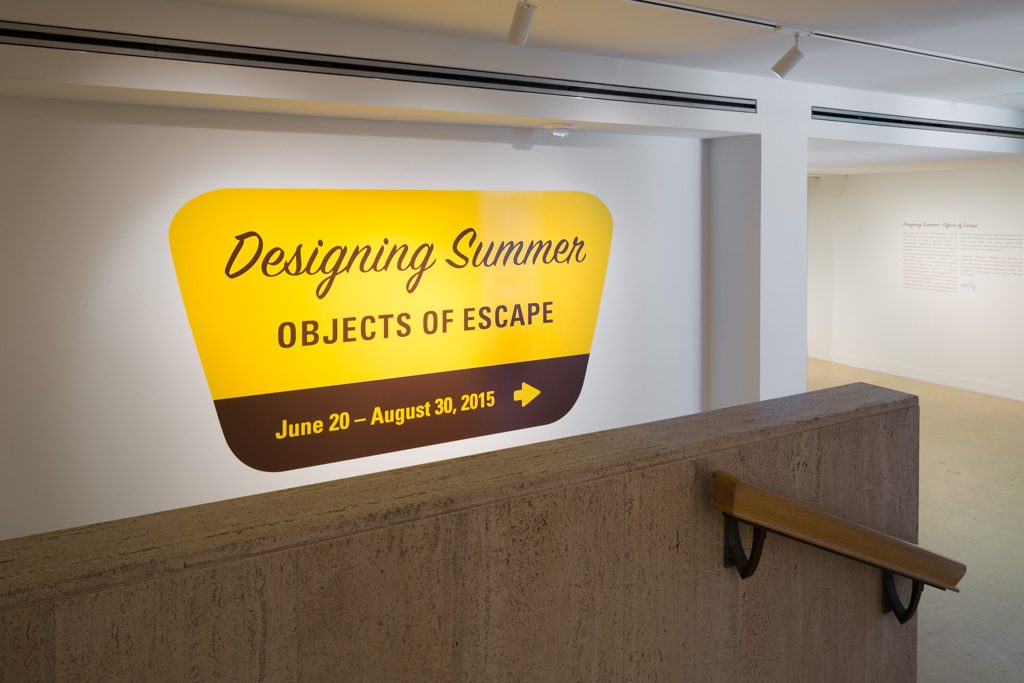 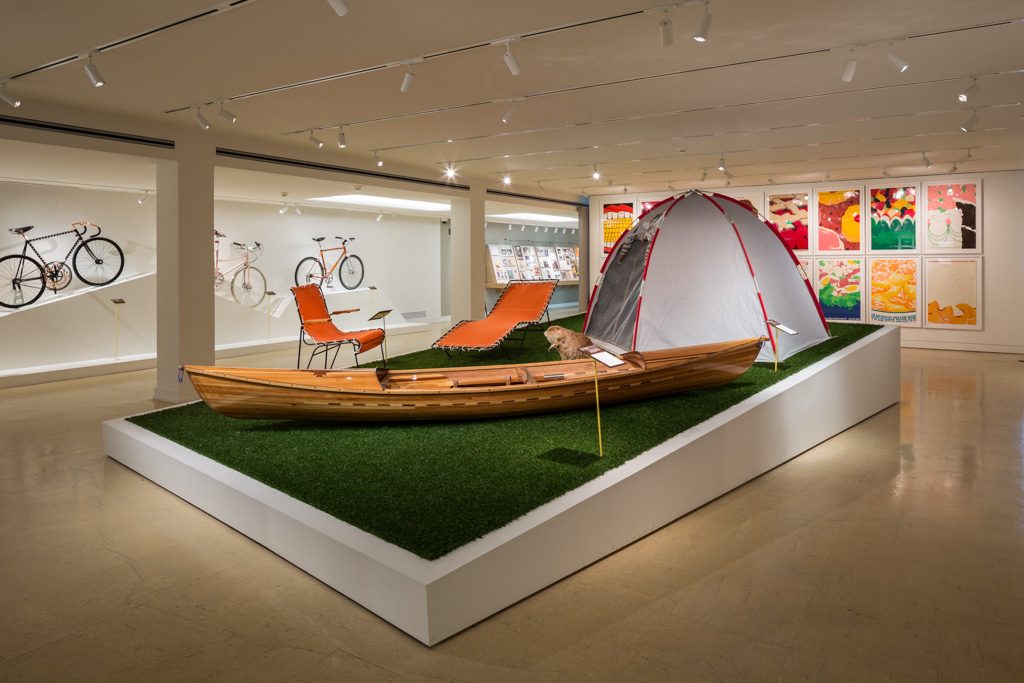