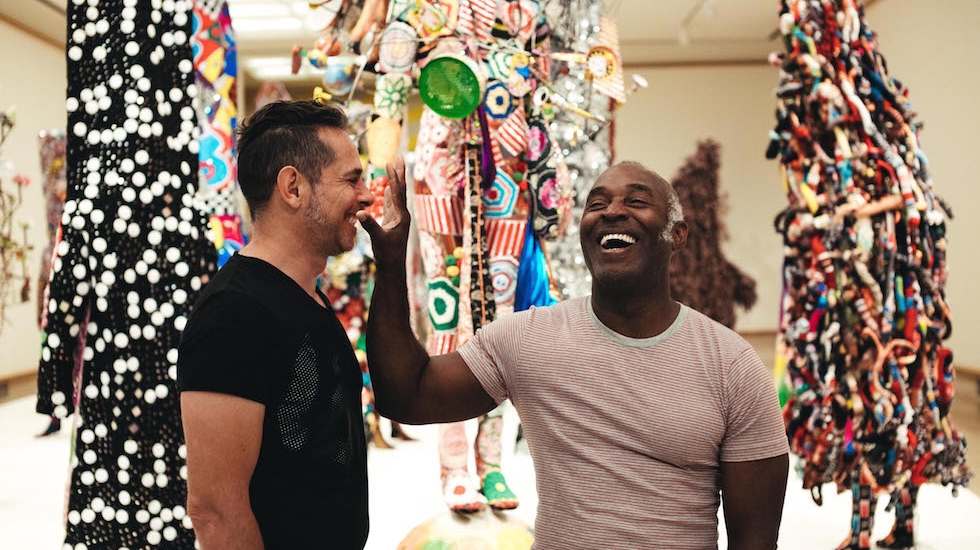 As part of our #LoveMyCity campaign, we’ve been asking creators and influencers all across America to tell us what makes their towns so special, by using the hashtag #LoveMyCity. Pride, we feel, is something that drives culture, style, and, for us, it’s the lifeblood of a maker and manufacturer. And while Nick Cave isn’t from southeast Michigan — Detroit, the artist says, “gave him his soul” as a performer.

It’s a hot day in August; Nick Cave and his creative partner, Bob Faust, have met us at the entrance to the Cranbrook Art Museum in Bloomfield Hills, MI, to tour Cave’s 7,000-square-foot solo exhibition and performance program, Here Hear. It’s hours before the final performance of Here Hear’s live dance series, Dance Lab, the museum installation is coming to a close October 11th, and Cave is feeling nostalgic.

“We feel we’re reintroducing Detroit to Detroit,” says Cave. “Because at these events we’re shocked at the overwhelming support that has been coming out.”

Here Hear is Cave’s most comprehensive exhibition to date. His iconoclastic Soundsuits — wearable sculptures that Cave and other performers dance and perform in — fill three rooms at the Cranbrook Museum of Art. The suits, each handmade with materials ranging from ceramic birds and beaded necklaces to vintage rag rugs and shoelaces, show the range of Cave’s work from the last 24 years. While Cave doesn’t have a favorite, Faust points to a looming totem, covered in enameled tin lids and pipe cleaners.

Cave built his first Soundsuit in 1991, following the LA Riots. The Soundsuits became a symbol for the artists’ experience of feeling like a target, yet completely shrouded and unknown at the same time. The sculptures continued to ring true; a recent creation was inspired by the Trayvon Martin case last year.

It was almost two years ago when the Cranbrook Academy of Art and Museum called Cave to ask for a solo exhibition back on his home turf. He said he’d do it, with some conditions.

“I called them back and I said I will do it only if I can work in Detroit,” says Cave. “We started planning and coming here and scouting out the city, and really coming up with a game plan of what it means to work as an artist with a civic sort of responsibility and using art as a vehicle for change.”

Cave and Faust have organized over 20 performances around the city of Detroit utilizing the Soundsuits. Cave himself has donned the sculptures for a series of invasion-style photoshoots throughout Detroit. Most recently, the suits were given to local dancers and groups to experiment with and create their own work.

“Honey, I’ve been doing parades and stuff since I was a little boy, pulling people together in the neighborhood and creating some sort of thing,” says Cave. “It has always been part of how I work. I’m always interested in the possibility of collaboration; who’s willing to come on board and make a spectacle. It’s really how I operate.”

“Detroit is open in that way,” adds Faust. “This scale, this amount of outreach, this timeframe, could never have happened in another city,” says Faust. “Detroit is a place for creative entrepreneurs, and there’s a bit of Wild West going on. If you wanna make it happen, you can.”

Faust and Cave lead us beyond the collection of Soundsuits new and old, to the costume closet in the Map In Action room. This is the hub for Cave’s performances and outreach and houses the furry tops, horse heads, and beaded jumpsuits that Cave and his team have lent out to local performers for Dance Labs.

“Without Detroit, I don’t know if I could’ve done this,” says Cave. “Being the only minority here was shocking to me. Cranbrook provided my intellect, Detroit provided my soul. The balance was critical.”

In Cave’s view, the Detroit that nourished him in 1987 is not so different than the one he sees today, and the one that inspired him to come back for this project.

Next month Cave will premiere the film Up Right: Detroit, which features youths from the Ruth Ellis Center donning Soundsuits and performing in the iconic Michigan Theater parking lot. Then, he’ll be hosting Heard•Detroit, another Soundsuit performance comprised of 30 raffia horses performed in by students from the Detroit School for Arts at Milliken State Park and on October 4th at the Masonic Temple for his free staged performance Figure This: Detroit, featuring much of the locally-made as well as Cave-created performances from his time in Detroit. 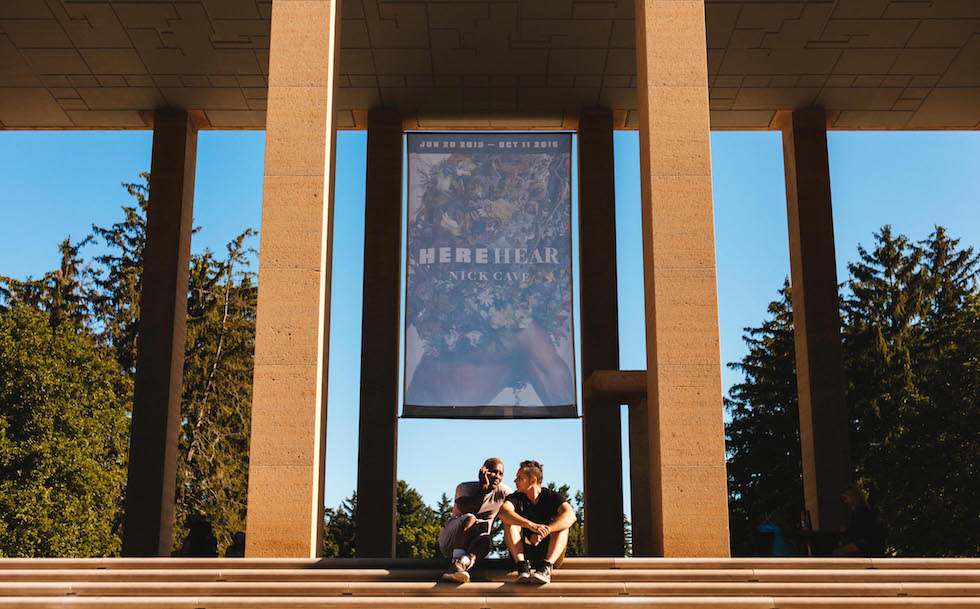 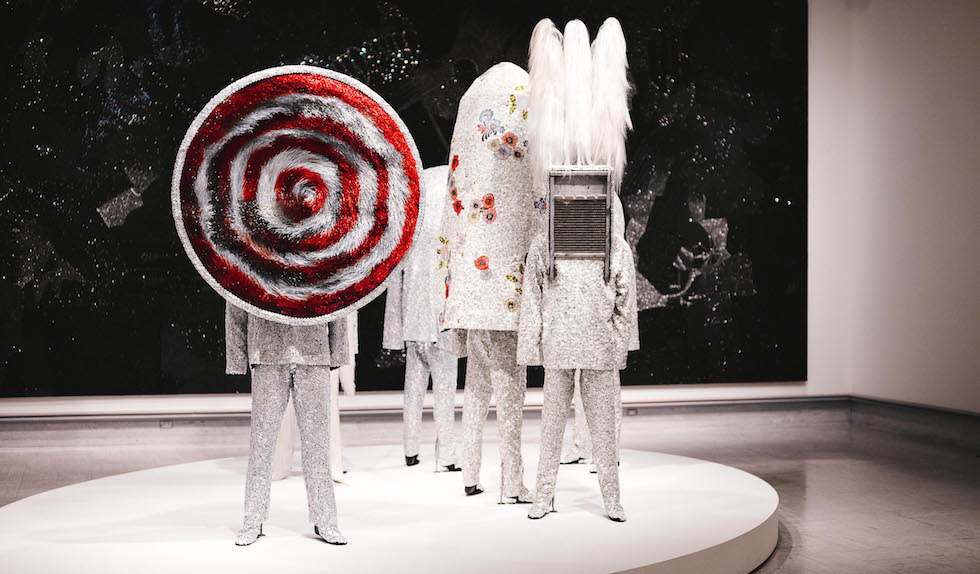 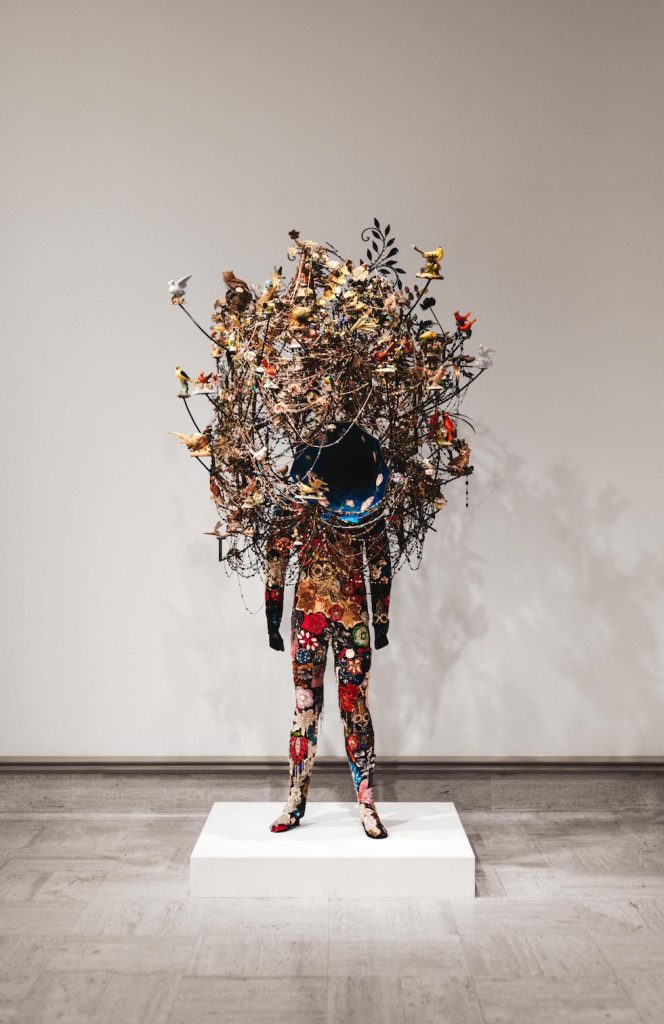