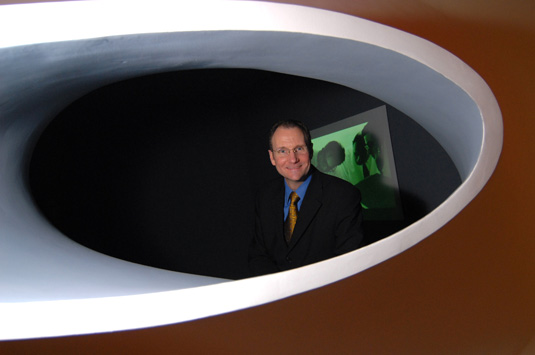 Bloomfield Hills, Mich., Aug. 25, 2015 – – Following the successful run of recent exhibitions at Cranbrook Art Museum, including Nick Cave: Here Hear, Cranbrook has announced that Gregory Wittkopp will assume leadership of the Cranbrook Center for Collections and Research, becoming the Center’s first full-time Director in September. This move is a natural evolution of Greg’s work at Cranbrook, given that, for the past 30 years, his career has focused on stewarding Cranbrook’s collections and architecture.

Under his leadership, the Museum conceived and completed its 2007-2011 renovation and construction project that included the addition of the new state-of-the-art Collections Wing. The Art Museum has grown in terms of programming, collections development, fundraising, membership, and attendance. Greg’s research and publications have focused on Cranbrook and its artists and include the book Saarinen House and Garden: A Total Work of Art. Recent curatorial projects and exhibition catalogs include My Brain Is in My Inkstand: Drawing as Thinking and Process (2013), The Anatomy of a Home: Anders Ruhwald at Saarinen House (2013) and No Object Is an Island: New Dialogues with the Cranbrook Collection (2011). He holds an MA in Art History from Wayne State University and a BS in Architecture from the University of Michigan.

The mission of the Center is to centralize the Cranbrook story to increase awareness of, and access to, the diverse art, architectural, landscape, design, and historical resources that comprise the Cranbrook legacy. “The Center for Collections and Research engages audiences who enjoy in-depth educational programming that connects to Cranbrook, its founders, and the designers, architects, artists, and collectors who have contributed to it. We are excited to expand the awareness of Cranbrook’s heritage as an international leader with new programs at the Center. With Greg’s decades of institutional knowledge, we are confident that the Center is poised to make great strides in the coming years,” said Dominic DiMarco, President of Cranbrook Educational Community.

The Center is responsible for collections management, interpretation, and research, and includes Cranbrook Archives. In the past three years, the Center has expanded its offerings to include Day Away excursions exploring Cranbrook connections around the region, Behind-the-Scenes tours of the Cranbrook campus, collaborative exhibitions and lectures, and other programs of interest to the Cranbrook community as well as the general public.

Greg will also be instrumental in discussions on Cranbrook’s new Master Plan exploring the possibilities of the development of plans for Cranbrook’s historic homes, its surrounding gardens, and the larger Cranbrook campus, including its outdoor sculpture.

“Greg Wittkopp has served as Director of the Art Museum for more than 20 years and stewarded its growth both in collections and facilities. We look forward to Greg bringing his energy, enthusiasm, and expertise to one of Cranbrook’s newest educational initiatives, the Center,” notes Christopher Scoates, the Maxine and Stuart Frankel Director of Cranbrook Academy of Art and Art Museum.

Posted In: Cranbrook Center for Collections and Research, Press Releases