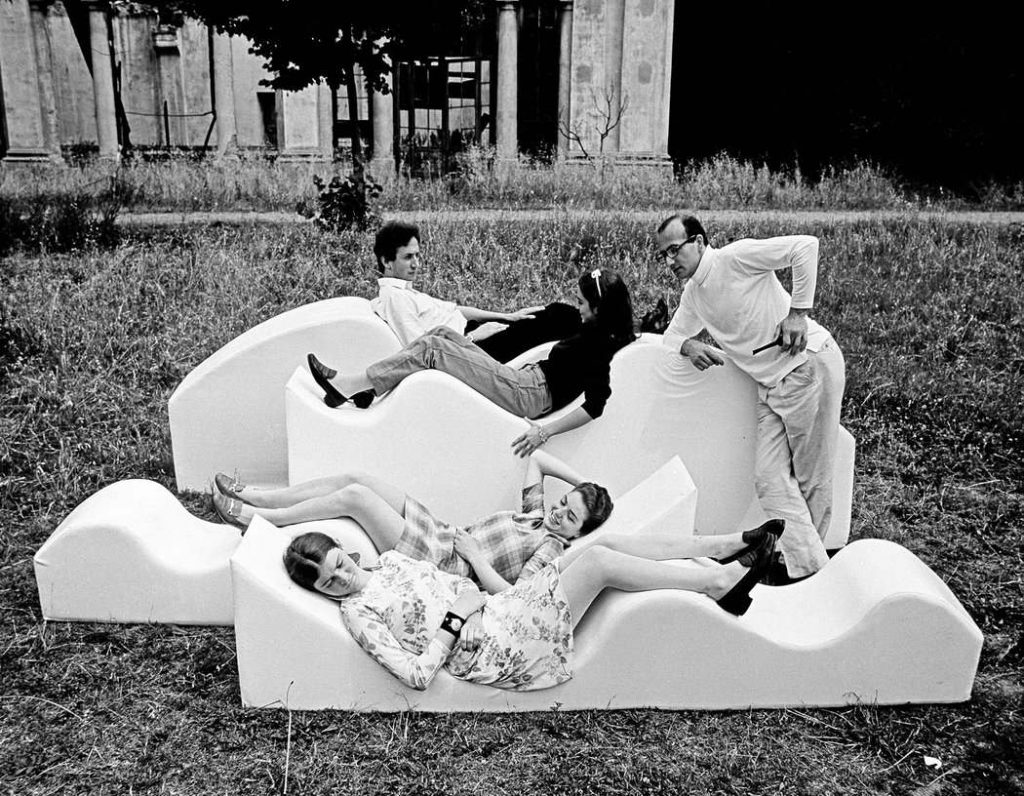 In 1965, four artists bought seven acres in southeastern Colorado, intending to make live-in works of art. Their communal project came to be known as Drop City, where residents lived in zonohedron domes of their own creation, sometimes constructed of automobile roofs and other scavenged materials. One dome, made of a fluorescent-painted lattice filled in with Mylar panels, made the trip east in 1968 to the Brooklyn Museum, filled with a five-foot-wide, round, spinning, “collaborative” work of art — “The Ultimate Painting” — that changed composition when illuminated by strobe lights.

After the show closed, both dome and painting were lost — but this fall they will re-emerge in Minneapolis, at the Walker Art Center’s new exhibition, “Hippie Modernism: The Struggle for Utopia.”Opening Oct. 24, it features a re-creation of the Drop City dome and painting by members of the original commune, along with other full-scale installations that will suggest the counterculture has come alive again.

“Everyone at that moment expected that life in the very near future would be different and better,” said Andrew Blauvelt, who organized the show as the Walker’s senior curator (he was just appointed director of Cranbrook Art Museum in Michigan). “These immersive experiences offered a taste or glimpse of that life. Installations were filled with new media like slide projectors, films, video, light, sound, but also wind, scents, elements of nature.”

“Hippie Modernism” is just one of a number of architecture and design exhibitions opening this fall and winter that will submerge viewers in the world of a designer. Many present-day artists and architects reference the ecological, humanitarian and speculative ideals of 1960s counterculture and are producing their own temporary architectures. Whether contemporary or archival, the aim is to disrupt the static presentation of drawings on a wall or objects in a case and to give visitors the sense of being there.

Though they can hardly be called hippies, the designing couple Charles and Ray Eames experimented with demountable, grid-like houses and multimedia shows, most famously for the IBM Pavilion at the 1964 World’s Fair in New York. A new retrospective, “The World of Charles and Ray Eames” (opening at the Barbican in London on Oct. 21), shows how experimental the Los Angeles-based Eames Office really was, putting its famous furniture in the larger context of its architecture, films, photographs and exhibits. The displays include a restored, 12-minute, seven-screen version of THINK, the Eames film shown inside the egg-shaped section of the IBM Pavilion, as well as a reconstruction of a nearly 10-foot-wide model of that building.

The artists of Drop City were influenced in part by Black Mountain College, a small school near Asheville, N.C., that became a nexus for collaboration and cross-pollination. “Leap Before You Look: Black Mountain College 1933—1957” (opening at the Institute of Contemporary Art in Boston on Oct. 10) will be the first comprehensive exhibition on Black Mountain in the United States, and it was organized by Helen Molesworth, the institute’s former chief curator, with the assistant curator Ruth Erickson. Painting, sculpture, music, craft, dance, poetry and design were all developed at Black Mountain, and the exhibition seeks to recreate the mood of the sylvan campus, where music played all the time.

“Leap Before You Look’s” “soundscape” starts with classical music and, as you travel through the show, it moves forward in time to Miles Davis and John Cage — including a grand piano preparedaccording to Cage’s method by inserting bolts, screws and pieces of rubber between the strings, altering roughly half the notes. A 20-foot by 20-foot sprung dance floor — set amid the still works by more than 90 artists — will host performances of works by Merce Cunningham and Katherine Litz.