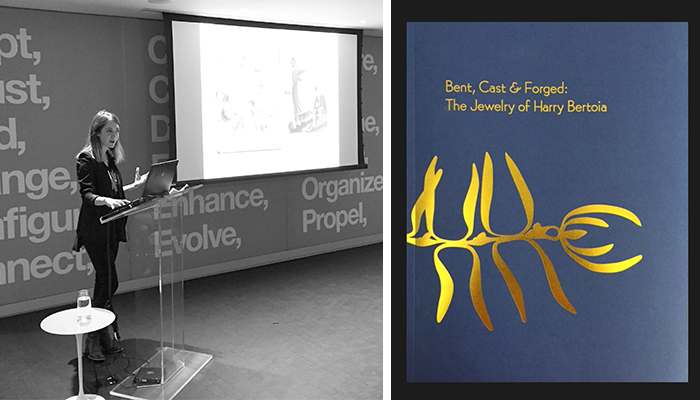 Cranbrook Art Museum Curator Shelley Selim presented a lecture on the jewelry of Harry Bertoia at the Knoll New York Showroom on September 30. The talk was a companion program to the current exhibition “BENT, CAST & FORGED: THE JEWELRY OF HARRY BERTOIA,” on view at Cranbrook Art Museum through November 29. It is one of a series of events and programs this year surrounding the CENTENNIAL of Harry Bertoia’s birth, hosted at Knoll showrooms in MILAN, NEW YORK and LONDON.

The exhibition is the first of its kind devoted entirely to Harry Bertoia’s jewelry designs, and it has an appropriate venue; Bertoia was a student at Cranbrook Academy, and, as Selim discussed, his work took on a different confidence, maturity and focus while he studied there.

In the lecture, Selim explored the origins and development of Bertoia’s famously prolific investigations of organic and natural forms, movement, light, sound and metal materials, which the exhibition suggests took literal shape in the small scale of jewelry during the Second World War. Themes present in Bertoia’s collection for Knoll and his large-scale sculptures are actively tested in his jewelry from that period.

The exhibition “Bent, Cast & Forged: The Jewelry of Harry Bertoia” has been organized by Cranbrook Art Museum and curated by Shelley Selim, the Art Museum’s 2013 – 2015 Jeanne and Ralph Graham Collections Fellow.