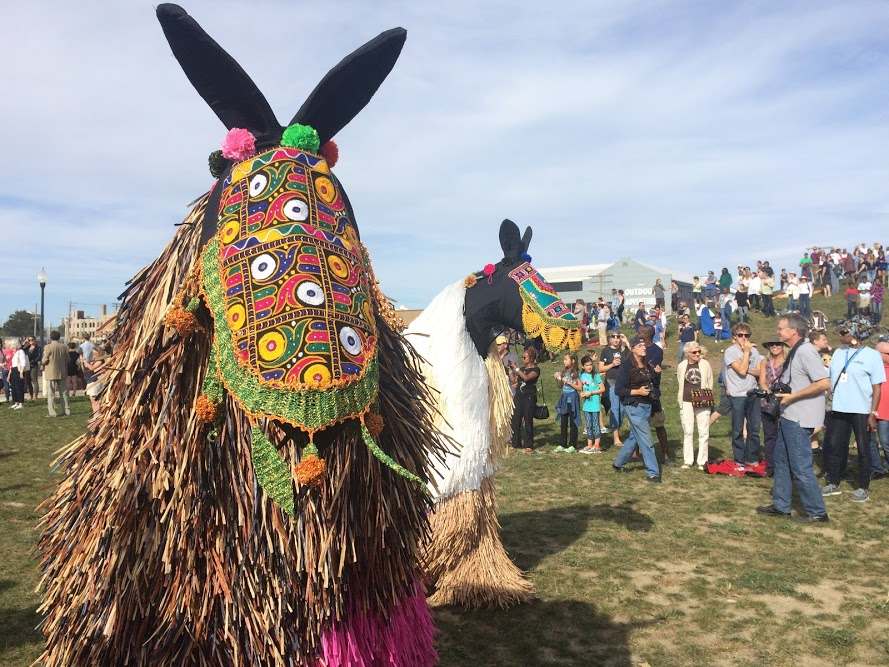 A dreamlike dirge accompanied the horses as they filed into a corral hemmed by a crowd of several hundred Detroiters enjoying the balmy breezes coming off the Detroit River.

Despite the rather discordant score, the mood was giddy at Milliken State Park Saturday – an authentically warm day in late September can have that effect – as the 60 dancers from Wayne State University and Detroit School of Arts cavorted in horse costumes.

During his four-month residency in Detroit and at Cranbrook Art Museum about 25 miles to the north, artist Nick Cave has opened up a lot of eyes to a city that has been unseen for so many years. He has mounted public spectacles like Saturday’s “Heard•Detroit” – in this case a procession of silky horse costumes in red, yellow, blue and brown – and with his Soundsuits, sculptural totems constructed of twigs, buttons, beads and birds that are on display at Cranbrook and have been set loose on the streets of Detroit, animated by professional dancers. He has worked on a film with kids at a shelter for LGBTQ youth and visited schools to get young kids working with materials to create their own Soundsuits.

Cave considers “Heard•Detroit”  – staged first in Grand Central Station in 2010 – a  “social magnet” that fosters a sense of community in which individual members of the crowd have permission to dream. The idea of the “herd” reflects this paradox, with the dancers – two to a horse – working together and then separately before becoming a single entity again.

“The horses are moving as a herd,” says Cave, 55, a graduate of the Cranbrook Academy of Art in the late 1980s.. “At the same time, there’s an act of togetherness in the audience; there’s a sense of people migrating in packs to come to the performance.”

Cave defies easy description. He teaches fashion design at the School of the Art Institute in Chicago and creates major installations throughout the country that explore his interest in community and identity. He is a dancer, sculptor, and a master of found objects.

“Nick Cave Here Hear,” Cave’s exhibit/performance series that began in June and runs through Oct. 11 – and includes a final large-scale performance at the Masonic Temple Oct. 4 – was made possible partially by a $150,000 Knight Arts Challenge grant.

He turned on at least one kid Saturday.

“It was awesome. I like the little hairy people,” said Jonah Rhodes, 7, of Warren, a suburb of Detroit.

A performance like Saturday’s “pulls the community together, people who’ve never seen this park before, people into the art scene, people with kids,” said his dad, Drew Rhodes, who learned about “Heard•Detroit” through a friend in Chicago who works with Cave.

Among the dancers Saturday was Audrey Clarice Johnson, 20, a junior at the Maggie Allesee Department of Theater and Dance at Wayne State University. Her professor Biba Bell, has been working with Cave on various performance projects, including the Dance Labs and “Heard• Detroit.”

“As a dancer I think of how my own body is an art. Nick Cave treats the art of the body,” Johnson says.

After only one week of rehearsal, getting into a 40-pound costume and dancing amid a crowd without being able to see much was a “wild experience,” she says.

“It was cool that all these people came together to see this performance,” she says. “It made me excited that people are excited about art in Detroit – little kids, too. It was supercool to hear them talking about us.”

Simone Woodard, 16, a senior at Detroit School of Arts who also played the lower half of a horse Saturday, is a native Detroiter who never spent much time in the city.

“Participating in things downtown is bringing me much closer to the city,” she says. “When you see it, you realize Detroit is coming back. This performance is a beacon of hope for the city.”

Cave says he wanted to galvanize and beautify the community during this four months here and found a community more than willing to embrace him.

“What is fascinating is reintroducing Detroit back to Detroit,” Cave says. “There are so many people hungry for creative impulse.”