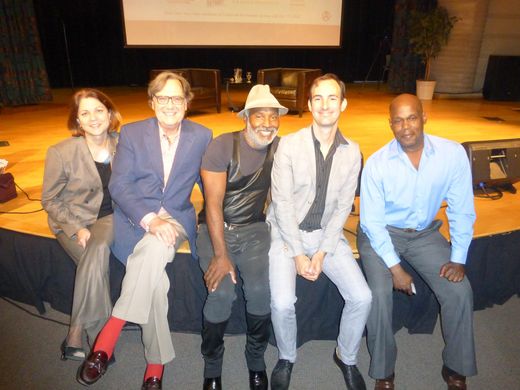 Now based in Chicago, Cave received his MFA in fiber 25 years ago from the Cranbrook Academy of Art. On June 20, Cave’s solo exhibition, “Here Hear” opened at the Cranbrook Art Museum. There’s only one week left before Cave packs up his celebrated soundsuits and recent sculptures on Oct. 11.

Today at the Masonic Temple in Detroit, Cave will present “Figure This: Detroit,” which is a culmination of his seven months in Detroit – from dance labs, to musical performance series incorporating his soundsuits, summer camps and the filming of Up Right: Detroit which was shot in one day at the Michigan Theatre in Detroit, featuring youth and young adults from the Ruth Ellis Center. Produced, shot and directed by The Right Brothers, Jamin Townsley and Andrew Miller; Up Right: Detroit made its world premiere on Sept 24 at a special fundraiser for Cranbrook Art Museum’s educational outreach programs at the Charles H. Wright Museum of African American History.

“The most extraordinary thing we did here was to introduce Detroit back to Detroit. That’s what the legacy of this project will be,” Cave said about the satellite performances that drew anywhere from 800-2,500 people in spaces like Campus Martius, the Dequindre Cut Lafayette Park and the Detroit Riverfront.

“There is a real cultural hunger for the arts,” Cave added.

Cranbrook Art Museum Curator of Contemporary Art and Design Laura Mott worked tirelessly to bring Cave’s solo exhibition to Cranbrook. She is even featured in Up Right: Detroit.

“Nick presented a living document of Detroit,” Mott said. “The performances as they unfolded morphed into its own kind of exhibition.”

While the majority of Cave’s pieces on display at Cranbrook are from the Jack Shainman Gallery in NYC, local collectors Jennifer and Dan Gilbert and Joy and Allan Nachman lent their two special soundsuits to “Here Hear.”

“I was just blown away by his talent,” said Jennifer Gilbert, a Cranbrook Academy of Art board member, who purchased a Nick Cave soundsuit in the fall of 2013. “We were so excited to be able to bring his art form to the city and let everyone experience his talent.”

Gilbert’s companies Quicken Loans and Opportunity Detroit gave a $100,000 contribution for the purpose of Cave being able to do outreach and special programs and performances specifically in the city of Detroit.

“At the end of the day, none of this is for me,” said Cave. “It’s my duty to be an artist with civic responsibility. It’s about empowering people and letting them know that they matter in the world.”