by Rosie Sharp, Knight Blog, the blog of the John S. and James L. Knight Foundation

Women throughout history have gathered for the purposes of discussion, education and communication on subjects that range from the intellectual to the highly personal. Cranbrook Art Museum Curator Laura Mott and Assistant Curator Shelley Selim decided to emphasize this tradition as they assembled “The Cranbrook Salon,” the second of three installations that are surveying and celebrating the permanent collection at Cranbrook’s multiple facilities. The exhibition draws together a multitude of elements for consideration, and is accompanied by a program of active participation executed by a collective known as the Detroit Bluestockings Crew, which was formed specifically to facilitate this series of salons.

Aside from Mott and Selim, the Bluestockings Crew is comprised of a compelling cross section of luminary women from Detroit’s art and cultural scene: Maia Asshaq, founder of DittoDitto; Samantha ‘Banks’ Schefman, co-founder of Playground Detroit; Meaghan Barry and Lilian Crum, designers at Unsold Studio; artist Ingrid LaFleur, founder of Afrotopia; and Marsha Philpot, a writer and performer.

Asshaq, LaFleur and Philpot are all Knight grantees. (In fact, Philpot’s 2015 Knight Arts Challenge grant is designated to the creation of Salon De’troit—a localized mirror to Cranbrook’s programming, intended to foster discussion and idea exchange among artists and thinkers in Detroit). The Cranbrook Art Museum, too, is a Knight Arts Challenge winner, receiving funding in support of last year’s Nick Cave project, as well as a second Knight arts grant in 2015 to host “The Truth Booth” by Hank Willis Thomas.

Members of the Bluestockings Crew will alternate presentations, inviting guests of their choosing to facilitate discussions. The first event, which took place in conjunction with the exhibition’s opening on Nov. 21 of last year, featured Mott and Selim’s guest, Prem Krishnamurthy, head of New York design studio Project Projects. During his presentation, Krishnamurthy exhorted the audience to consider the space around them, mentally remove one object from the showcase (hung in traditional salon style, with thematic clusters schooling organically along the two long walls of the exhibition hall), and replace it with something else. This invitation to mentally curate the exhibit touched off a lively discussion surrounding the reasons people had for including or excluding specific works. It is exactly this spirit of participation and engagement that Mott hoped to trigger with “Cranbrook Salon.”
February will feature a burst of upcoming events, including Unsold Studio’s Barry and Crum presenting guest Lisa Waud, whose “Flower House” project drew thousands of visitors last year; Philpot presenting fellow Knight Arts Challenge winner Michael Stone-Richards, who will be lecturing on the history of salons; and Schefman presenting guest Augusta Morrison, a local educator, musician and member of Seraphine Collective, a female-operated music society. The final event will take place in early March, with LaFleur presenting her guest, filmmaker Rola Neshaf, who directed and co-wrote the film “Detroit Unleaded.” Complete details about events can be found here.

The “Identity” cluster, bleeding into “The Frame,” with the Renaissance portrait that Mott borrowed from Cranbrook House on the far right.

The show itself groups works from all over Cranbrook, which spans the Cranbrook Academy of Art, Institute of Science and independent college preparatory schools. Nothing is off-limits to Mott and Selim’s roving eye, with works borrowed from buildings all over campus, including a Renaissance portrait that Mott was astonished to discover was authentic, given that it had been sitting largely unnoticed in a corner of Cranbrook House. Various groupings explore tonality, appropriation, utopia/dystopia, the sublime, duplicity, process and more. With nearly 50 works on display, “The Cranbrook Salon” is richly equipped to provide unlimited associations between seemingly disparate works. And in launching the Detroit Bluestockings series, it is thoughtfully providing the perfect forum within which to present these ideas. 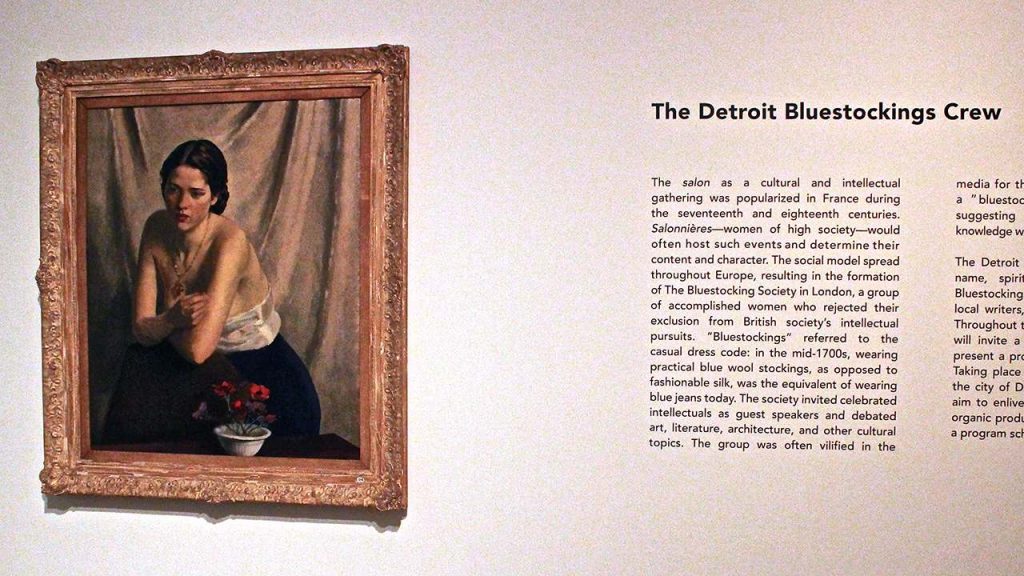 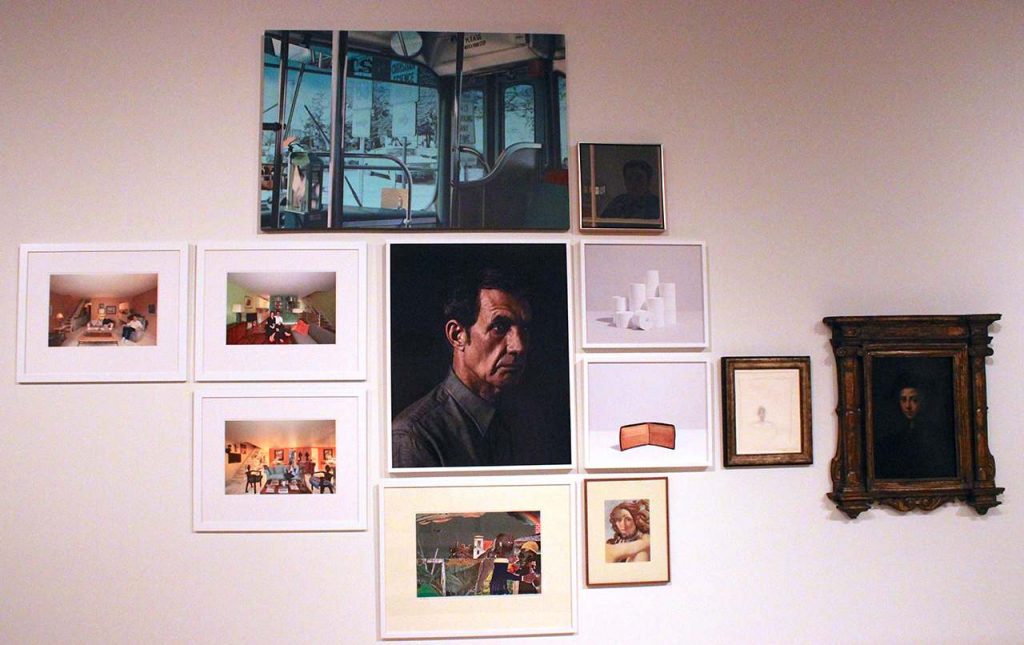 The “Identity” cluster, bleeding into “The Frame,” with the Renaissance portrait that Mott borrowed from Cranbrook House on the far right. Photo by Rosie Sharp.

Posted In: Cranbrook Art Museum in the News, The Cranbrook Salon