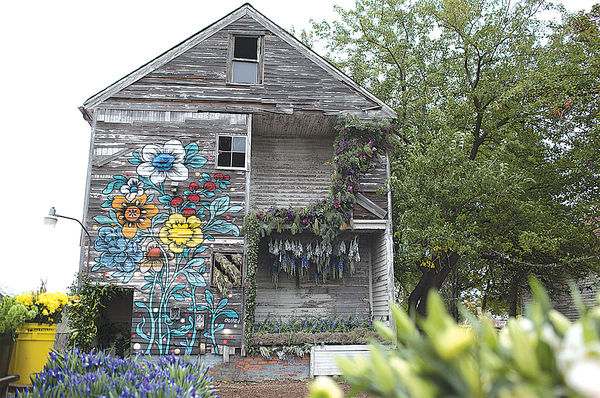 Last year, floral designers came from around the country to adorn an abandoned Detroit home with fresh American-grown flowers. The project was conceived by florist Lisa Waud, who will be one of the guest speakers at a Detroit Bluestockings Crew event. (Photo provided by the Cranbrook Art Museum)
January 13, 2016

“Nick Cave: Here Hear” connected Cranbrook to the city of Detroit like never before, and now there’s no going back. The museum is in the midst of yet another exhibition, called “The Cranbrook Salon,” which explores the history of salon-style art displays, and to complement that, they’ve arranged a series of salon events with a decidedly Detroit — and even feminist — flare.

“The Cranbrook Salon,” according to Curator of Contemporary Art and Design Laura Mott, is a peek into the history of exhibition design, highlighting the salon-hanging technique that dates back to 17th-century Paris and features paintings hung floor-to-ceiling.

But in the art world, Mott explained, there’s more than one meaning for the word salon. It’s also a way to describe social gatherings that double as interactive exhibits and discussions about art and culture.

“We’re reimagining the famous salons that were popular in London,” said Mott. “The Bluestocking Society was an 18th-century collection of women who would hold salons. The Bluestocking name came from their style of dress and was kind of equivalent to blue jeans.”

Bluestockings, though, wasn’t a well-received moniker for the women. Mott explained that the name was more of a slur meant to shame the group for being unfeminine or unattractive in their pursuit of knowledge, which at the time was a strictly male pursuit.

“We’re kind of taking that term back in a very kind of empowered way,” she said.

Mott, along with Shelley Selim, who is the Jeanne and Ralph Graham assistant curator, brought together a collective of strong female Detroit voices for a series of public programs to go along with “The Cranbrook Salon.” The Detroit Bluestockings Crew will host salons of their own in Detroit, where guests can participate in a conversation on the current and future climate in Detroit culture.

The next installment of the Detroit Bluestockings crew will be held at 6 p.m. Feb. 4 at the Bloomfield Hills museum. Designers Meaghan Barry and Lilian Crum, of Unsold Studio, will host the evening with their special guest Lisa Waud, the founder and owner of Pot & Box. She’s perhaps best known as the floral designer who created Flower House, a foreclosed and abandoned property turned floral design display in Detroit.

“The salon they’re going to do will be a play on (Flower House),” explained Selim. “Participants will be invited to collaborate on a design of a home, drawing on themes of the exhibition. That will be really fun.”

A few days later, on Feb. 11, the Detroit Bluestockings Crew will take a road trip to The Jar House in Hamtramck for a salon with publisher Maia Asshaq, followed by another installment of the series at Playground Detroit Feb. 18. The crew will wrap things up March 3 back at the museum with artist Ingrid LaFleur. A detail scheduled is available on the museum’s website.

“The Cranbrook Salon,” which Selim described as an immersive “mind-map” style exhibit that groups themes together and connects them through fluid transitions, is on display at the museum through March 13.

Posted In: Cranbrook Art Museum in the News, The Cranbrook Salon