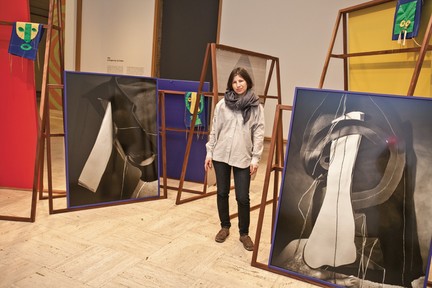 Part photographer and part performance artist, Liz Cohen uses both mind and body to focus on issues of transformation and belonging while also heading up the photography program at the Cranbrook Academy of Art in Bloomfield Hills.

“Generally, I tend to focus on issues around belonging and acceptance because those are big human issues that we all face,” she said. “In all of my work, there is an examination of belonging and what it means to be in or out of a group, or what it is to be left out when you have something to offer. My work has also dealt with radical transformation and modification.”

Amongst Cohen’s work is a decade-long project titled, “Bodywork,” in which Cohen transformed an East German automobile into a Chevrolet El Camino. To complete the project, Cohen apprenticed in an auto shop and learned how to reconstruct the vehicle into a custom lowrider. At the same time, Cohen transformed herself into a bikini model and was photographed with the vehicle. Cohen’s work has been exhibited locally at the David Klein Gallery, in Birmingham; and throughout the country and world, including Salon 94, in New York City; The University of Arizona, the El Paso Museum of Art; Galerie Laurent Godin, in Paris; and other galleries in Stockholm, Sweden, New York City, San Francisco, Stuttgart, Germany, and several other locations.

It was her Bodywork project, she said, that led her to Cranbrook and her current home in Bloomfield Hills, where she lives with her husband, a native of the Birmingham area.

“It was kind of a perfect storm,” she said. “I had been working at the time on the car in Arizona. If it was becoming a Chevrolet, I thought it should be finished in the land of General Motors. This opportunity came up at Cranbrook, so I did it and it became an amazing experience.”

Previous work included, “Canal,” which documented a group of transgender sex workers in Panama. Her latest work, “Him,” is on exhibit through March 4 at the Cranbrook Art Museum. The exhibit includes new work that draws on a continued interest in exhibitionism, subcultures and acts of belonging. The exhibit is a collaborative research project with a self-described eunuch, who has undergone surgical transformations. Cohen alters interviews, photos, videos and other media to tell his story.

“The first group of people I was working with in Panama were transgender, so they were going though changes in their bodies through hormones. And with the transformation of the car, I was going through a radical process of becoming a car customizer and a bikini model,” she said. “Now, (Him) is a man who in his practice radically modifies language to make poetry, while at the same time radically modified his body, and I’m radically modifying his story into another form.”

Cohen’s own transformation as an artist grew out of her interests in her work and documentary-type photography. Growing up in the Phoenix area, she said, she hadn’t thought of being an artist at an early age.

“It’s not what I set out to do when I was going to college,” she said. “I had been through some personal things. My father died before I started college. I took some photography classes and really enjoyed it. I had no intention of pursing it as a lifelong pursuit – then life took me here.”

Posted In: Cranbrook Art Museum in the News, Liz Cohen