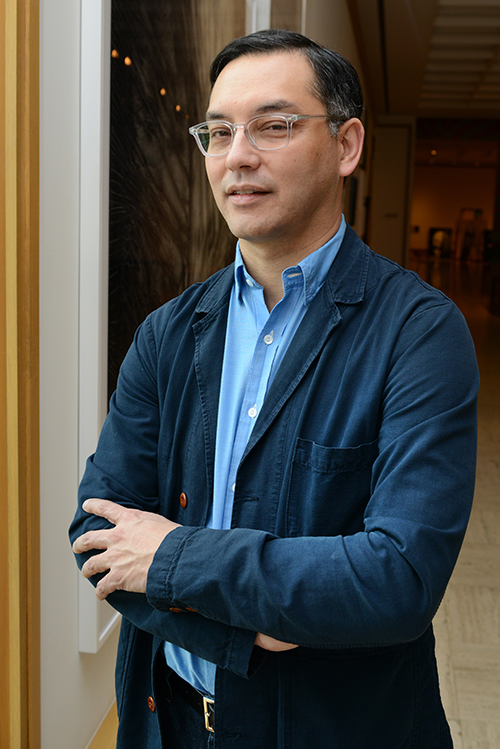 Andrew Blauvelt serves as director of the Cranbrook Art Museum in Bloomfield Hills, Michigan, a position he assumed in September 2015. In this role, Andrew oversees the Museum’s collection, exhibition, and education programs. Prior to this, he served as senior curator of architecture and design at the Walker Art Center, a contemporary arts museum in Minneapolis, Minnesota. During his tenure there, he also served as chief executive overseeing the design, marketing, public relations, education, and new media departments. A graphic designer for more than 25 years, Andrew has received over 100 design awards, including the 2009 National Design Award for Corporate Achievement for his work at the Walker, the first non-profit to win the award joining the ranks of Nike, Apple, and Target. While at the Walker, Andrew curated numerous exhibitions, including Strangely Familiar: Design and Everyday Life (2003) and Some Assembly Required: Contemporary Prefabricated Houses (2005), and with Ellen Lupton at the Cooper-Hewitt National Design Museum, Graphic Design: Now in Production (2011). His latest exhibition Hippie Modernism: The Struggle for Utopia (2015) opened to critical and popular acclaim at the Walker this fall and will travel to the Cranbrook Art Museum in June. Andrew received a MFA in design from Cranbrook Academy of Art, and a BFA in visual communication from the Herron School of Art at Indiana University. With his husband Scott Winter, development director at Cranbrook Academy of Art, he built an award-winning home in Minneapolis designed by Snow/Kreilich Architects, which was featured in Dwell and other publications. This contemporary, concrete and glass structure houses his collection of books and modern furniture, and is heavily populated with, not surprisingly, pieces by numerous Cranbrook alum. When Andrew is not working, you can find him walking the grounds at Cranbrook or searching for a place to kayak. He currently resides in Bloomfield Hills.

Book: On the nightstand are Yamasaki in Detroit and Return of the Repressed: Destroy All Monsters, 1973-1977; a book from design friends Statement and Counter-Statement: Notes on Experimental Jetset; and some design inspiration with Mario Bellini’s Album: Eating as Design.

Motto: Under promise, over deliver.

Film: So far this year, Carol.

Where were you born?

I was born in New York state, in the Hudson River Valley.

What were some of the passions and pastimes of your earlier years?

I used to haunt used bookstores and antique and thrift stores looking for furniture and ceramics and other collectibles. The Web pretty much curtailed that activity.

When did you begin to realize your intrigue/fascination with the arts?

When I was growing up as a kid. I studied art all through school, although I was supposed to become a lawyer. I transferred to art school instead.

How did you get your start as a curator?

When I started working at the Walker Art Center as their design director I told them I would take the job if I could also curate exhibitions. It was a bit brazen, but I was going to give up a job as a tenured professor. I wanted to keep some academic activity.

What themes and/or topics have interested you most in creating exhibitions?

I have pretty broad tastes in art and design actually. I prefer “third rail” topics, like shows about suburbia or prefabricated architecture or hippies. Topics most museums or curators like to avoid.

What led to your decision to come on board at the Cranbrook Art Museum?

I had been at the Walker for 18 years. When you tell younger people that, it sounds like a jail sentence! It was a great and evolving experience, however, but it felt like I should try something new. An opportunity arrived at Cranbrook, which I was familiar with, so I thought why not?

What has delighted you most since assuming your new role as director?

The energy and excitement of people around town about the arts scene in the Detroit area. It’s not just downtown, although that is vital and important, it’s also at Cranbrook and Ann Arbor and Dearborn—all over really.

How would you describe your creative process or approach?

I’m a designer by training, so I imagine without constraints but I try to realize that vision within them. I like to envision many different options and allow myself to go down numerous tangents, but I trust that in the end the product will be good because experience tells me that (knock on wood).

What three things typically come together in the best of exhibitions?

The artist’s work looks great. The presentation delivers a memorable experience. Visitors leave inspired—you should leave wanting to make something yourself.

Tell us about the significance of your upcoming exhibition Hippie Modernism: The Struggle for Utopia?

It’s really a new art historical thesis. The 1960s are well known as an era in terms of social history. In art history this has been reduced to well-known movements like Pop Art, Minimalism, and Conceptualism. But many other things were made in the 1960s beyond these movements: street performance, experimental graphics, protest posters, light shows, video technology, and radical architectural experiments. Crazy stuff. Wild stuff. This was the 1960s. All of these ideas did not die but haunt us today, whether environmental degradation or civil rights.

Do you have a personal favorite in this exhibition?

It’s like children—there are no favorites. I really do like it all. If forced, the show really began with an interest in radical architecture and anti-design that surfaced in Italy in the 1960s and early 1970s.

Is there a contemporary/emerging artist on your radar that you’d like to bring to Cranbrook?

Oh my, there are so many. Let’s just say that we are trying to figure that out right now. We are very excited to be presenting the Truth Booth, a project by Cause Collective, later this summer. It will also be an exhibition at Cranbrook this November. It’s an inflatable structure in the shape of a giant speech bubble. People can enter it and make a video testimonial that answers the question, “The truth is…” It will be traveling around Detroit and the metro area. It has traveled the world, to places like Afghanistan and South Africa.

What did you enjoy most about your earlier career in graphic design?

I really enjoyed making books—I treated it like sculpture, a book as a three-dimensional object. I enjoyed working with other designers too.

Which artists working today do you admire most?

Again so many. I really enjoyed working with Petra Blaisse of Inside/Outside in Amsterdam. We worked together on a new landscape design for the Walker Art Center which should be complete in 2017. I admire the spaces between architecture and people that she chooses to operate in.

What painting or sculpture from any period means the most to you?

Perhaps, not surprisingly, I have an affinity for postwar art—modern art. I’m drawn toward works like the sliced canvases of Lucio Fontana or places like Marfa, Texas, where artist Donald Judd realized a grand vision, not unlike Cranbrook, which encompass the environment as a total work of art. I’m also a sucker for a Romantic landscape by Caspar David Friedrich or a Dutch still life painting.

Looking ahead, what is your vision for the Cranbrook Art Museum?

It should be the destination for contemporary art and design. Like the Academy is a hotbed of artistic experimentation, the Museum needs to reflect the same spirit. Because of where it is located, it also needs to pay homage to the history of Cranbrook, but since the place is very much alive it can’t be just about the past.

From where do you draw inspiration?

It seems like anywhere or everywhere. I’m most inspired by people who were inspired to do great things.

Learn to do anything you can, any skill, because it will come in handy. And it has.

What three things can’t you live without?

Is there a book or film that has changed you?

Books are a constant resource for me. I make them. I collect them. I think through them. That said, film tends to be the most visceral of experiences. For instance, I’m still haunted by Steve McQueen’s films—the artist and director.

What drives you these days?

The same thing that was instilled in me at Cranbrook so many years ago: always move forward and no repeats.