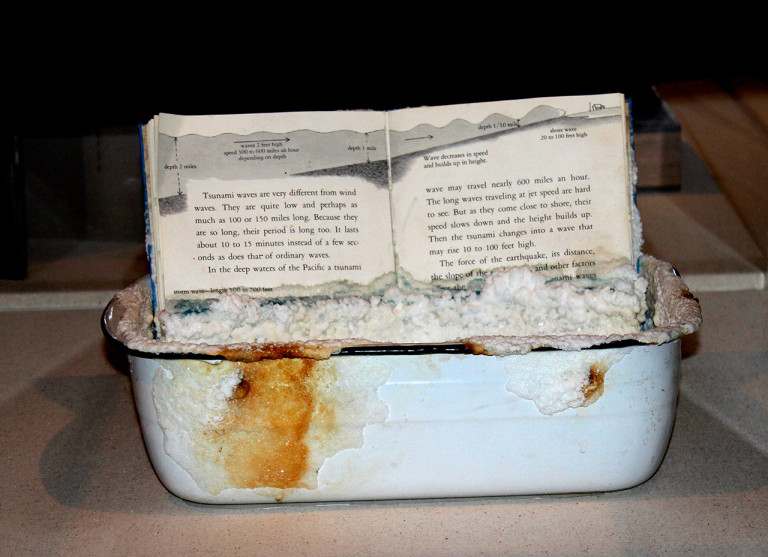 DETROIT — I’m an inveterate lover of books, so you never have to bother arguing with me about the continued relevance of print as a medium. Books are not just the sum of their words and ideas, but lovely standalone objects — a concept aptly demonstrated by two book-based shows going on in the Detroit Metro area.

At Holding House is TURNOVER A SPREAD — a survey of artists’ books and limited edition texts by local Detroit publishers and print artists, including Toby Millman, Lynne Avadenka, Laura Beyer, and Ryan Standfest. At the Cranbrook Museum of Art is Read Image/See Text, which borrows its title from an iconic poster titled “See/Read,” a treatise on communications design, by former artist-in-residence and co-head of the Design Department at Cranbrook Academy of Art, Katherine McCoy. This hands-on investigation of books as art objects mixes the work of hometown heroes like Susan Goethel-Campbell, Megan Heeres, and Corrie Baldauf (whose Infinite Jest Project continues to proliferate, digitally and physically) with some well-known artists’ books, including examples by Ed Ruscha and Kara Walker. The Cranbrook show additionally features a graphic design section and a reading room with selections curated in collaboration with Maia Asshaq, co-founder of Detroit’s boutique bookstore du jour, Ditto Ditto, co-organizer of the wildly popular annual Detroit Art Book Fair, and local expert on limited-run publishing.

The common theme is one of experimentation, and both venues have taken thoughtful approaches to the sticky problem of how to present a medium that tends to require hands-on interaction in a gallery or museum context, which typically forbids it. At Holding House, works deconstruct the traditional book form, like Laura Beyer’s “Die Cut Study,” which hangs a stack of pages with a die-cut circle excision in a colorful pinwheel around a nail. Supplementing the gallery installation is a library of content for visitors to page through, and, at the opening, there were live readings by some of the contributors. The Holding House show also acted as the launch for A Book of Revelations, a new serial publication by artist and performer Bridget Michael, which features an array of drawn and written content, including poetry, illustrations, short stories, and song lyrics, from all corners of the Detroit creative scene (including part one of a story by the author).

Ryan Standfest contributed to all three aspects of TURNOVER A SPREAD, with prints of his own creation, selections in the library courtesy of his independent publishing venue, Rotland Press, and a reading at the opening. “I don’t make books for myself, really,” he said in an interview, “I am an artist that makes stuff in many iterations: drawing, printing, performance, installation, video — but then there’s this other enterprise I got involved with, which is publishing.” After a few early experiments, Standfest avoids publishing his own work through Rotland, but reserves it as a venue to present the work of others — a finely honed assortment that demonstrates Standfest’s penchant for satirical, absurd, and transgressive materials. A recurring feature is the ROTLAND DREADFULS, a drawn and written series that pays homage to penny dreadfuls, cheaply produced 19th-century English pamphlets that contained discursive and entertaining little stories, often dealing with horror themes. For his own works, Standfest uses “vulgar” forms like tabloids, comics, and variety catalogs in combination with high Modernist subjects of architecture and design. One work included in the show, “The Pavilion,” begins with a suicide from the iconic Mies van der Rohe Towers at Lafayette Park (where Standfest lives), but quickly turns into a discussion of the building from which the man jumped.

In thinking about how to invite interaction, Cranbrook cut directly to the chase with a section that invites viewers to carefully flip through some exquisite artists’ books. In an increasingly digital age, we defenders of the printed medium will find much to delight in here, including exceptional quality and texture of paper, covers, and bindings. Artists’ books can be multi-sensory experiences, taking readers on visual and tactile journeys. Anne Vieux (2014) by Transitory Flatspace features lenticular covers and sumptuous interior spreads full of shiny pink and purple patterning. Tip open the covers of two works by Megan Heeres to find plaster-cast rectangles in the place of pages, each embedded with a tiny collection of ephemeral objects, like flax seeds and cut paper. Other sections of the show present works that push books to their stretching point, such as Ontological Fragment (Tsunami) by Ronald Allen Leax. A children’s science book is placed within a porcelain pan, along with salt and laundry bluing, which interact to slowly crystallize and corrode over the surface of the book and the pan — information that is taught as being straightforward in a theoretical context may turn out to be beyond our control as we apply it in a real-life setting.

The medium of artists’ books ultimately breaks into two governing considerations: content versus form. Some artists, like Susan Goethel Campbell, work flexibly with both; in some of her books that deal with interactions between mankind and nature, she eschews written content entirely, while in others, like Brick and Rim, from the Hub Series, she interlocks magnetized blocks of text that assemble written narratives into the shape of their titular forms, creating a story along a curving rim, for example, in Rim. Others, like Lynne Avadenka, are constantly exploding the form, seeing the constituent pieces of a book — type, font, layout, binding, and language — as components that may be shifted and meaningfully reconfigured into unrecognizable shapes. Opening in New York this month at the Yeshiva Unversity Museum, is an entire body of work created by Avadenka, “How a Poem Begins,” which responds visually and abstractly to the work of seminal Hebrew-language poet Rahel Bluwstein — another show which demonstrates all the many ways books, and poets, can evolve beyond their traditional bindings.

Take heart, publishing industry. Language is important, and will perhaps always be the abiding reason for printed matter, but these shows contain dozens of timely reminders that books are a form of their own, and one that will always hold a place in the hearts and minds of creative people. 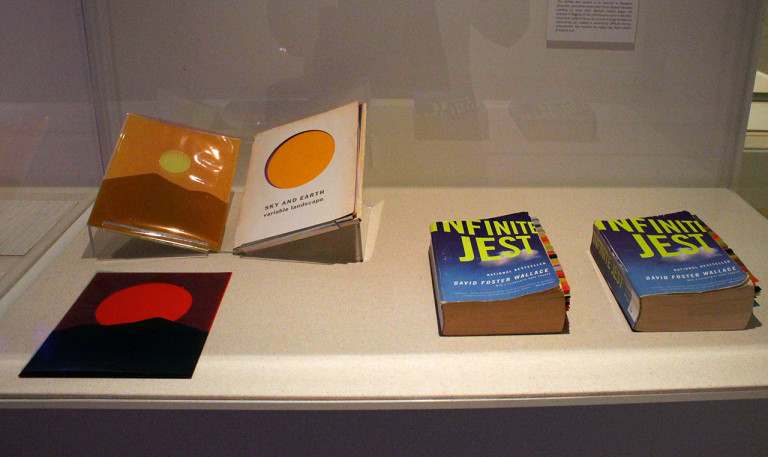 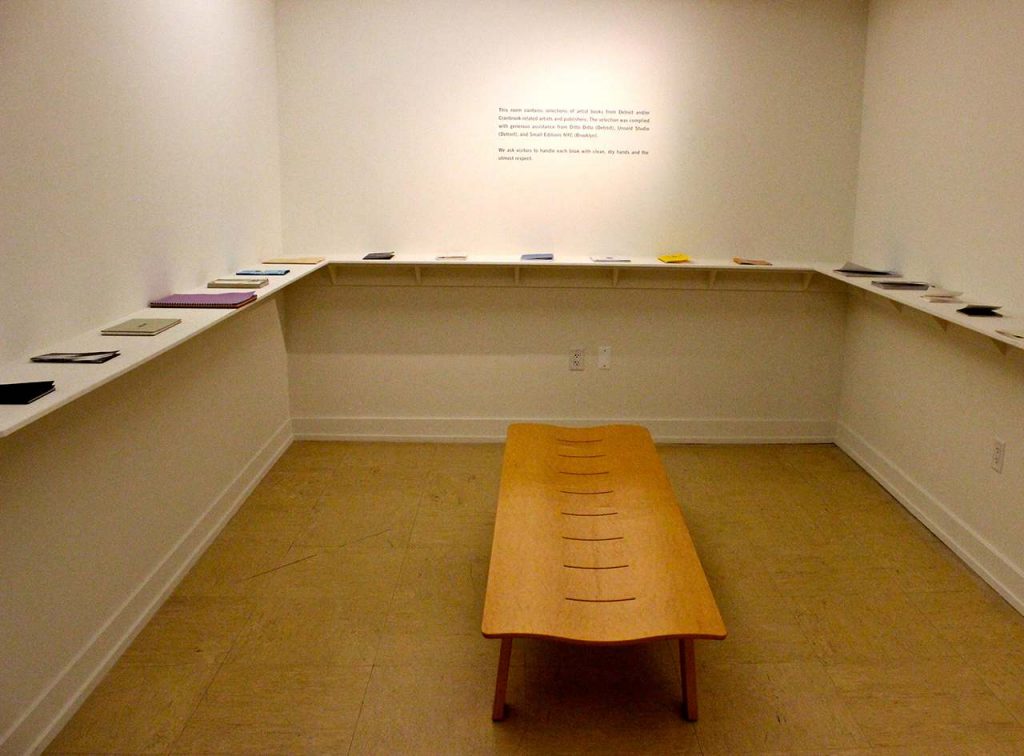 The reading room at Cranbrook Museum of Art, curated in partnership with Maia Asshaq. Photo by Sarah Rose Sharp/Hyperallergic. 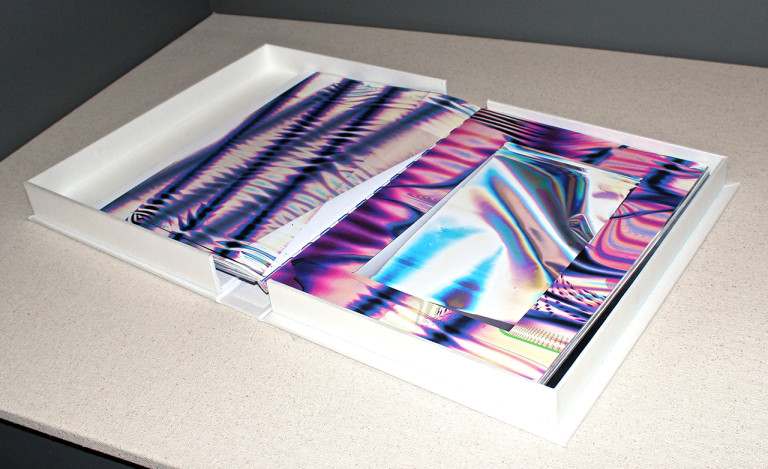