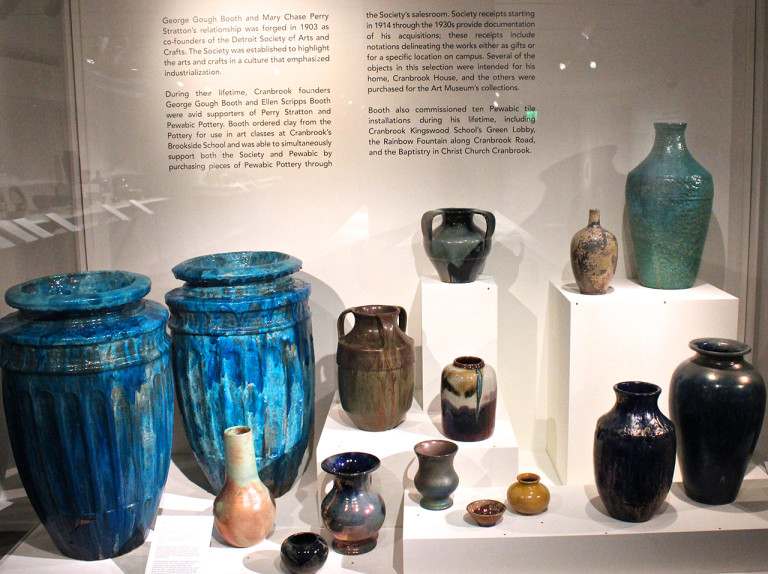 A case of Pewabic pottery on display at Cranbrook. Photo by Rosie Sharp.
February 22, 2016

If the title to the ceramics show guest curated by Anders Ruhwald for the main gallery at Pewabic in Detroit sounds a little on the hippie side, that’s because it’s a snippet of text lifted from the introduction to “Centering in Pottery, Poetry, and Person” by M.C. Richards—a potter, poet and essayist who taught at the Black Mountain College in the 1940s. Ruhwald’s show, “This Is the Living Vessel: Person. This Is What Matters. This Is Our Universe,” seeks to show work that embodies some of the concepts outlined by Richards in this text, ideas about the latent capacity for creativity in all humans, and our common experience as unlocked by certain art forms.

The show presents an impactful collection of works by seven different ceramic artists living and working in America (with the exception of Howard Kottler, a posthumous contributor to the show). Each of these artists leverages the ceramic medium as a mechanism to express perspectives existing outside the white, male, heteronormative structures that govern a great deal of society, as well as the art world as a subset of society.

This show is part of a two-way exchange between Cranbrook and Pewabic—both Knight Arts grantees, and both with ceramic studios founded by women. Ruhwald has served as artist-in-residence and head of the ceramics department at Cranbrook since 2008, and has included recent Cranbrook graduate Matthew Bennett Laurents in the “Living Vessel” lineup. Simultaneously, the Cranbrook Art Museum presents “Simple Forms, Stunning Glazes: The Gerald W. McNeely Collection of Pewabic Pottery,” which showcases a recent donation of one of the largest private collections of Pewabic pottery. There are more than 100 works on display, including items made by Mary Chase Perry Stratton, Pewabic’s founder.

For the most part, “Living Vessel” has a more conceptual and contemporary take on ceramics, but the show’s centerpiece, an installation by Nicole Cherubini, seems to be in direct conversation with Pewabic traditions. Cherubini’s pieces, “Goldenrod” (2015) and “The Way of the White Clouds (White Structure With Blue)” (2015) both feature ancient vessel constructions, such as a Mexican bean jar, put through a process of digital scanning and printing and then recast as earthenware, before being glazed in rich shades that are the signature of Pewabic pottery. The blue vessel, which sits atop a column and seems to be emerging from a botched and blocky base structure, is a jewel-tone shade of turquoise that would merge seamlessly in the Cranbrook exhibit. Of course, Cherubini’s digital processing of these handmade structures paradoxically highlights the hand of the maker, which is an omnipresent factor in all thrown ceramic objects—and the one that, according to Ruhwald, holds the capacity to unite us.

“Every society, throughout time, has had the vessel,” he says. “It draws us together as people.”

Roberto Lugo, an artist of Puerto Rican descent, contributed three exquisite pieces to “Living Vessel.” Each a conventional form featuring elaborate figurative and decorative glazing, the works celebrate the lives of people of color, and gives them some territory in a fine studio ceramics context. It was impossible to choose a favorite between “Frida Kahlo Jar” (2015), “Martin Luther King Jar” (2015) and “Erykah Badu Jar” (2015); one could devote endless time picking apart the motifs surrounding Lugo’s heartfelt portraiture.

Standing out on the minimalist end was “Dialogue of a day, #B” (2015) by Marie Torbensdatter Hermann—the next turn in her recent practice of ceramic arrangements on shelves. Whereas her 2015 solo show at Simone DeSousa Gallery featured object arrangements on ceramics shelves rendered by the artist, for “Dialogue,” Hermann has set her minimal arrangement of ceramic and latex objects on a maplewood shelf, fabricated to her purpose.

“I want the shelf to kind of disappear,” she said during a conversation about the work, “and I can’t work well enough in wood to make things invisible.” As always, Hermann offers a quiet and precarious assortment of objects that take a paradoxically long time to resolve in the mind of the viewer, for all their simplicity.

On the more maximalist side, “Scout” (2013) by Kathy Butterly presents a very singular, purse-like object in a case that mimics the typical department store display. While the traditional work of a potter hinges on a process of repetition, Butterly embraces the practice of creating singular objects, and the bright little vessel stands out as a welcome and unique little oddity of form.

These are just a number of factors in an expert job of curation on the part of Ruhwald, who managed to select pieces with maximum impact without overcrowding the limited space in the Pewabic galleries. Each selection carries with it a wholly formed perspective and numerous associations, in terms of ceramic history and personal identity, and as such, merits serious contemplation. Luckily, the show continues on display through March 28, giving locals an opportunity to visit Pewabic and take some time to do so.