In a Sprawling Collaboration, an Artist and Her Subject Craft His Identity | Hyperallergic 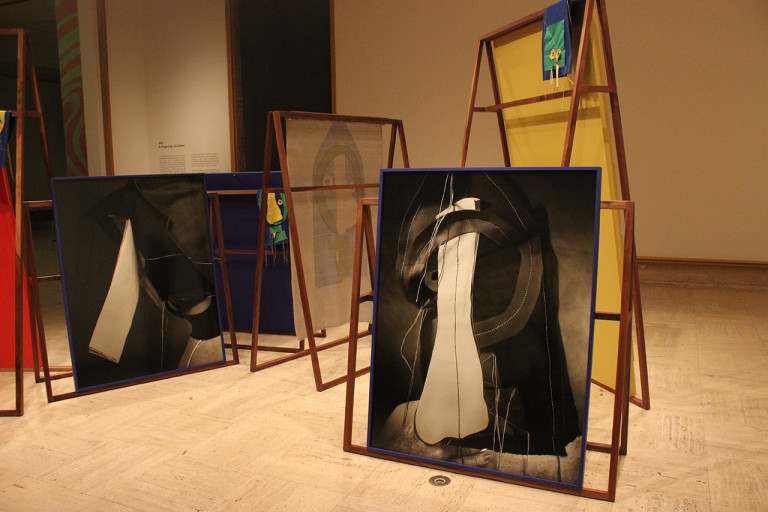 BLOOMFIELD HILLS, Mich. — We live in a time that challenges easy distinctions on the subject of identity. Gender has become fluid as never before in Western society, and art-makers find themselves remarkably unconfined by medium in an era that values ideas articulated by the most effective means possible rather than with a more traditionally rigid separation between disciplines. This freedom to maneuver is fully evident in Him, a project Liz Cohen developed over the past year as artist-in-residence and head of the photography department at Cranbrook Academy of Art (a position she has held since 2008).

Cohen worked intensively with her subject, Eric Crosley, a male-presenting, self-described eunuch who has engaged in radical physical transformations in his search for a body that he feels appropriately reflects his identity — a topic he captures movingly in his own poetry. Cohen, who considers herself a documentary artist, uses her photographic eye to govern a practice that is hands-on and far-ranging, in terms of adopting skill-sets far outside photography.

In the case of Him, Cohen first translated aspects of Eric’s poetry into a visual motif of minimalist representations in bright primary colors — a nod to the influence that the last seven years at Cranbrook has had on her aesthetics. These images underwent a second layer of abstraction as Cohen translated them to weaving, a craft she picked up specifically for the purposes of this project (and one to which Cranbrook is particularly well suited, having developed its own model of commercial loom). The weavings, which reflect Cohen’s willingness to embrace new media in the pursuit of dynamic expression, reverse the source image and dilute the intensity of the color, holding the brighter, primary-toned strands in a wheaty linen matrix. The frilled borders of the smaller weavings seem to suggest the torn edges of spiral-bound notebook pages, though curator Laura Mott likens these constructions and their larger counterparts to domestic objects like napkins and tablecloths.

Mott and Cohen worked rigorously on the project, meeting weekly in support of the process, a schedule to which Cohen attributes her ability to turn out such a large and complete body of work in a single year. Mott, for her part, credits Cohen’s work ethic; the artist staunchly refused to outsource the weaving, and Mott recounts bearing witness to Cohen’s efforts at the loom. Cohen’s process seems to include physical sympathy, by way of backbreaking labor, with the necessity of constructing (rather than accepting as given) a corporeal identity, step by painstaking step. Next, these symbol sets were translated into 3D fiber masks — essentially, bags for the head presenting rough features, indistinctly ethnic in their aesthetics. Finally, Crosley reincorporated these abstracted narratives, donning the masks for a photo shoot. The end results is a series of large-scale, exquisite black-and-white portraits that fuse Cohen’s vision with Crosley’s physical presentation.

Next, these symbol sets were translated into 3D fiber masks — essentially, bags for the head presenting rough features, indistinctly ethnic in their aesthetics. Finally, Crosley reincorporated these abstracted narratives, donning the masks for a photo shoot. The end results is a series of large-scale, exquisite black-and-white portraits that fuse Cohen’s vision with Crosley’s physical presentation.

These works — the sewn symbols, the weavings, the masks, the portraits — are framed in bright primary colors and presented on easel-like wooden structures, which Mott characterizes as indicating the skeleton upon which all other physical identity is built. The arrangement, which is modular and could be repositioned in any number of ways for future exhibition, creates an outward-facing view throughout the room, with each wall punctuated by just a few framed images, including a sole portrait that reveals Crosley’s trunk and legs.Cohen received a lot of attention for her past project,

Cohen received a lot of attention for her past project, Bodywork, wherein she apprenticed herself to custom auto-body shops around Detroit, eventually melding an East German Trabant with a Chevrolet El Camino. She mirrored this feat of bodywork on herself by simultaneously transforming into a bikini model, then posing for a provocative series of pictures on and around the car she reformed. Though it deals with a wildly different subject and set of learned skills, Him nonetheless reveals the consistency of Cohen’s interest in identity, auto-determination, and the lengths to which one must go to find the truest expression of self. 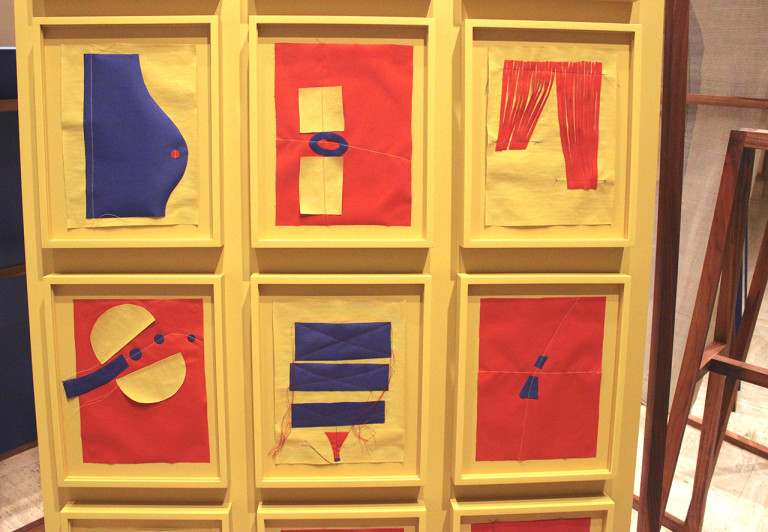 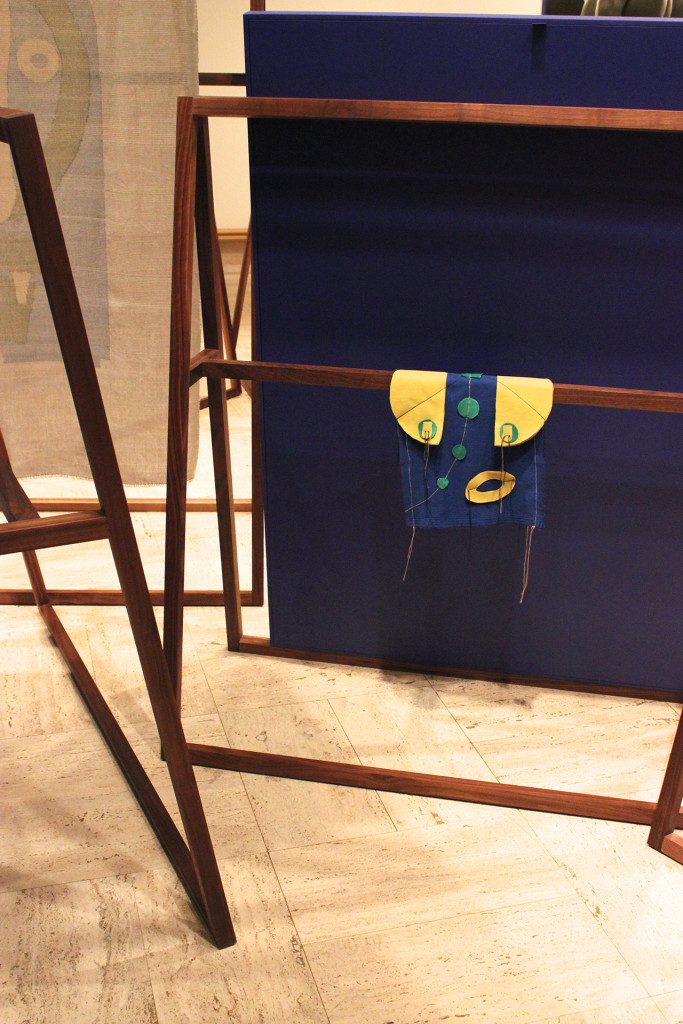 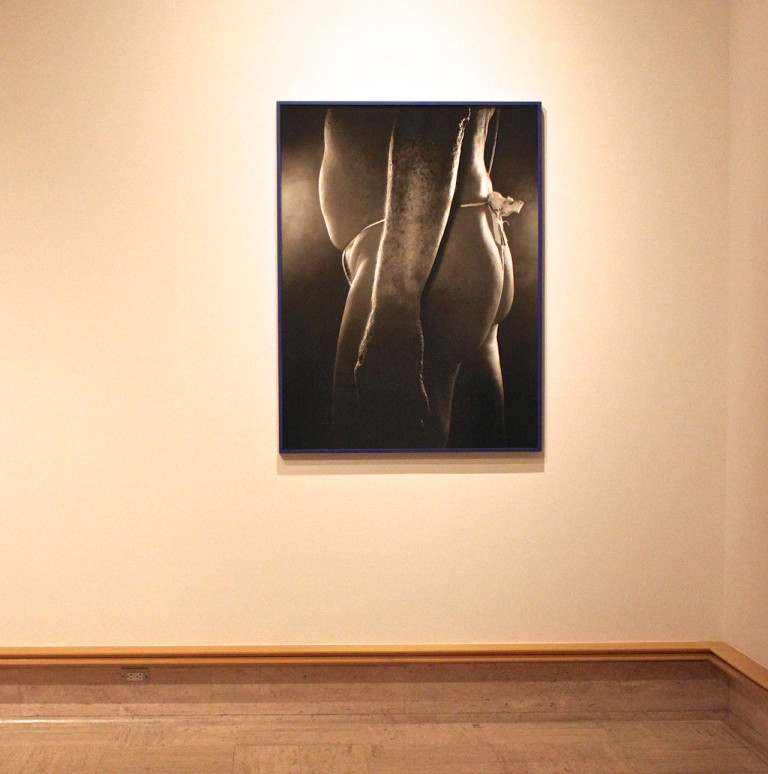 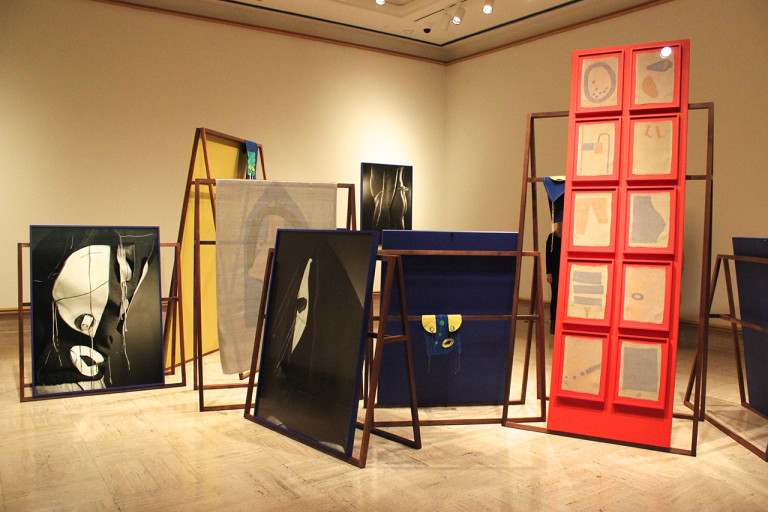 Posted In: Cranbrook Art Museum in the News, Liz Cohen