Graduating MFA’s show their stuff at Cranbrook | The Detroit News 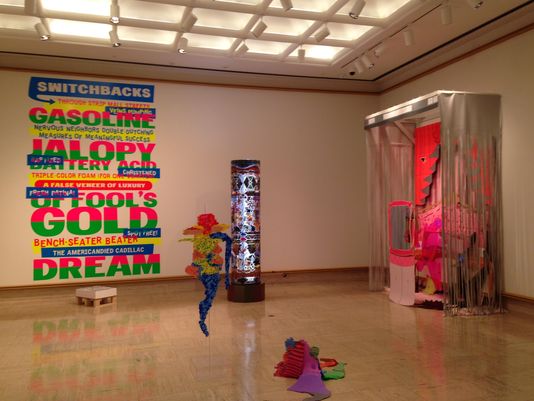 You expect the annual Graduate Degree Exhibition at the Cranbrook Academy of Art to be wild, and this year’s projects by the newly minted MFA’s do not disappoint.

The show, which will be up at the Cranbrook Art Museum through May 15, spotlights the work of 83 students in 10 different artistic disciplines, from metalsmithing to architecture to 3-D, and fills almost every inch of the Eliel Saarinen-designed museum.

In a switch, this year the Architecture Department has erected the students’ installations out of doors in a series of seven interactive displays.

Inside, both upstairs and downstairs are filled with artworks that consumed the graduates’ last semester, many of them huge, and almost all marvelously weird and strange. (Downstairs there’s also a small, elegant Pewabic Pottery show that shouldn’t be missed.)

Consider Juvana Soliven’s “Relational Failures,” three beeswax sculptures that, while highly abstract, all do seem to point to retreat and disappointment.

Soliven, who’s from Hawaii, says she’s interested in stability versus flux, and illustrates this in her work by using a highly perishable medium, beeswax, susceptible to decay and collapse, “like the way relationships break,” she says.

Perhaps most eloquent is a tall, thin-legged pedestal with a beeswax top that’s begun to sag and slide off the pedestal edge — a remarkably simple, eloquent composition.

By contrast, Emmy Bright, originally from New Haven, Connecticut, works in signs and cartoons that tread the fine line between subversive art and comedy.

Take “The Mask.” The first of this two-panel cartoon involves a large, crudely rendered sketch of an oval head covered by a some sort of dense black mask.

The next panel, “After Removing Mask,” lends itself to interpretation humorous and profound, since it’s virtually the same image, unchanged — a blob-like head-entirely shrouded in black.

“I like to do simple-looking stuff,” Bright says, “that gets more complex when you think about it.”

Going from the subtle to the spectacular, New Yorker Johanna Herr erected a round tower about nine feet tall covered with images that are illuminated, quite beautifully, from within.

Herr’s covered the cylinder, “Believe in Love,” with shockingly dichotomous images — graphic pictures of war’s violence that she’s surrounded with pictures of huggable little kitties and other saccharine kitsch.

It makes for complex and intriguing study.

“I’m interested in state-sponsored violence,” Herr says, “and how we dehumanize others. So the kitties become a tool of subversion for discussing dark subject matter.” 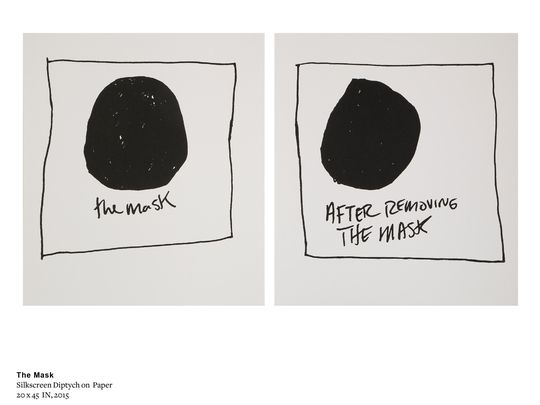