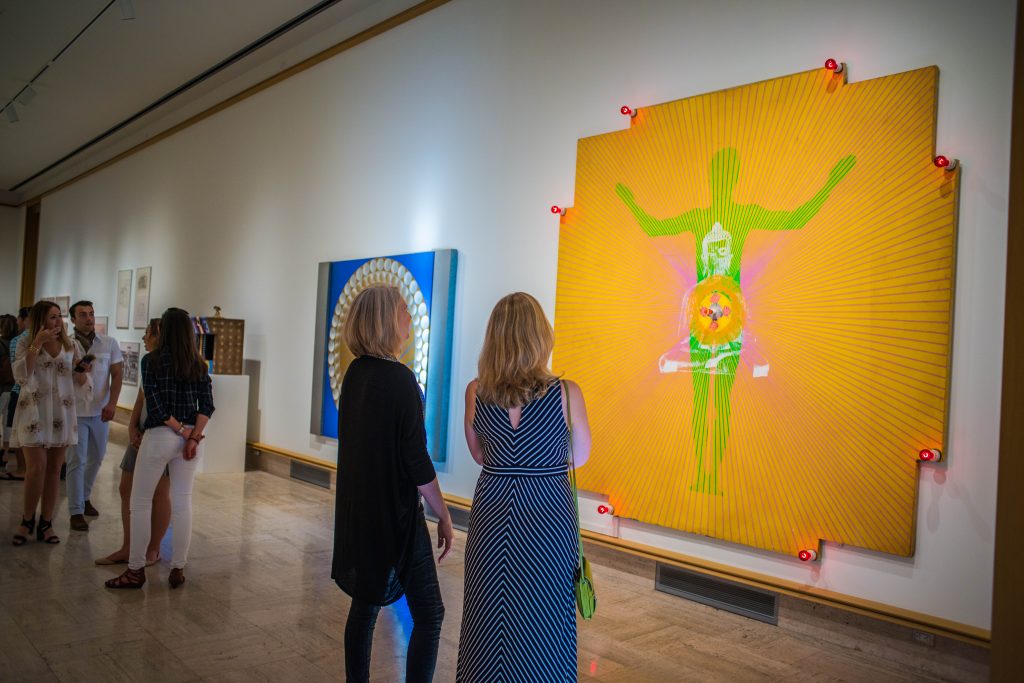 The words “hippie” and “modernism” may seem to be opposing upon first glance. The anti-establishment rhetoric espoused by the late 1960s hippies, known for their agrarian practices, flowy outfits, mantras of peace and love and a communal lifestyle, do not exactly scream “modern.” However, in their adaptive and innovative dealings with the era’s new technology and media, these hippies found creative approaches for societal betterment that can be seen in many commonly accepted practices today.

The Cranbrook Art Museum’s new exhibit, Hippie Modernism: The Struggle for Utopia, which is open now through October 9th, explores this tension and eventual reconciliation between what exactly makes the hippie so modern in a 21st-century lens. It is currently on its second stop on its three-city national tour, starting at the Walker Art Center and ending at the University of California Berkeley.

The term “Hippie Modernism” is often met with confused questions as what it even means, according to director of the Cranbrook Art Museum and curator of the exhibit, Andrew Blauvelt. The birth of the term, he explains, has a particular resonance for the Cranbrook community, for he borrowed it from a Cranbrook Academy of Art graduate, Lorraine Wild, who mentioned it in passing back in the ‘70s. While she was using the term “to talk about some of the design that was being done in that time period,” Blauvelt adopted the phrase and repurposed it to describe a historical moment, namely the countercultural period between 1964 and 1974.

“Art historically, you hear about all the big movements, like pop and minimalism and conceptualism, and so it’s a really dynamic time,” notes Blauvelt.

“Almost every modern [art] movement was birthed in the 1960s. So there’s a lot written about that, a lot of museum shows about that, but there’s very few about the counterculture—the artistic output that wasn’t recognized as art, or maybe still isn’t recognized as art, or it was recognized as art and then was forgotten about strategically. So as an art historical project [Hippie Modernism is] really about going into forgotten space and then excavating these moments. … The term isn’t referencing a style; it’s more about the time period.”

The exhibit is loosely based around the phrase, “Turn On, Tune in, Drop Out,” the mantra of Timothy Leary, a psychologist who promoted and experimented with LSD for its therapeutic possibilities before it was declared illegal.

“Turning on,” says Blauvelt, “really meant discovering the hidden truths or hidden realities that are out there, like the everyday world that you see isn’t really all that is there.” Either by taking drugs or by manipulating certain technologies to filter out reality, the artists in this first section attempted to enter different dimensions to create their paintings, sculptures, and new art media, like light shows.Hippie3

USCO’s Shiva acts as a seminal piece in this section as well as in the entire show, in part due to the fact that it was not created by a singular artist, but by an art collective. USCO, which stands for the Company of Us, was a merger of a poet, engineer, and a painter that was known for their strobe light shows. Not only does this represent the multidisciplinary approach of many artists, who looked to expand beyond the traditional definitions of painting or sculpture, but also the fact that they wanted the work to stand for itself, independent from the artist’s name.

Shiva provides a feast for the eyes with its neon orange, geometric canvas, red light bulbs, and spiritual figures layered in the center. While the canvas itself does employ loud colors and bright bulbs, it implores the viewer to be a bit more meditative, setting them up for the rest of the exhibit.

As one transitions from the trippy Ira Cohen photographs and mesmerizing light shows of “Turning On,” sensory overload awaits in the “Tuning In” gallery of the exhibit.

Blauvelt describes, “Tuning in was really more of tuning into society and culture of the time and politics of the time, which was very turbulent of course,“ and what better way to tune into society than an entire room filled with alternative publishing and posters of the ‘60s printing revolution?

Posters made with silkscreen and bold color palettes span the walls of the space. As they call for social and political justice and protest the expansion of the Vietnam War, a big blue metal box stands stoically in the center of the room, inviting viewers to enter.

Created by Ken Isaacs, another Cranbrook alum, this azure chamber houses 24 slide projectors that project images from Time and Life Magazine on all surfaces while a soundtrack plays in the background, completely immersing the viewer in news media of the time. Blauvelt notes, “News journalism at the time was a big phenomenon. [Isaac’s] whole theory is that the future of education was in images, not text-based. So he would create these experiences with the 300-and-some images, and he would make different editions, with different images and different soundtracks.” By stepping into this blue chamber, the viewer is literally forced to tune in.

Isaacs’ prescient notion of an image-obsessed culture is just one of many times when these hippies seem to have an insight into our present day.

After emerging from the big blue box, the viewer can step into the section centered on “Dropping Out,” featuring the group of artists Drop City.

“They formed what later would be called a commune, really an artists’ colony in 1965,” says Blauvelt. “It was in Colorado. They bought a cheap piece of land and they attended lectures by Buckminster Fuller who was the inventor of the geodesic dome. And they did their own handcrafted attempts at making and building domes. They built communal structures. So there would be a kitchen dome, a studio dome, a theater dome. And they lived on the land there for just about a decade.”

Hippie2One of these geometric domes resides in the Cranbrook Art Museum, and the structure alone seems to be a work of art. Inside, however, is an equally mesmerizing feast for the eyes. The interior houses a collaborative canvas crafted by four painters of Drop City, which is illuminated with strobe lights.

Also in this section are examples of the beginnings of the sharing culture, which we see today in contemporary companies like Zipcar and Airbnb, as well as works that demonstrate the ecological awareness of the time, for the first signs of climate change originated in this era of Hippie Modernism.

This theme of history repeating, of today’s culture actually mirroring and deriving from the mid-60s, runs throughout the entire exhibit, making a trip to the Cranbrook Art Museum relatable and enjoyable for any viewer, no matter their generation.

“If you look at a long arc of history, then yeah a lot of these ideas are just super mainstream now,” concludes Blauvelt. “There are all these crazy mash-ups that happen when you start thinking about how these things fit together. People … were told this was a crazy period, just ridiculous, forget about it … when actually when you think about it today, they had all of these concepts that have had a big influence.” 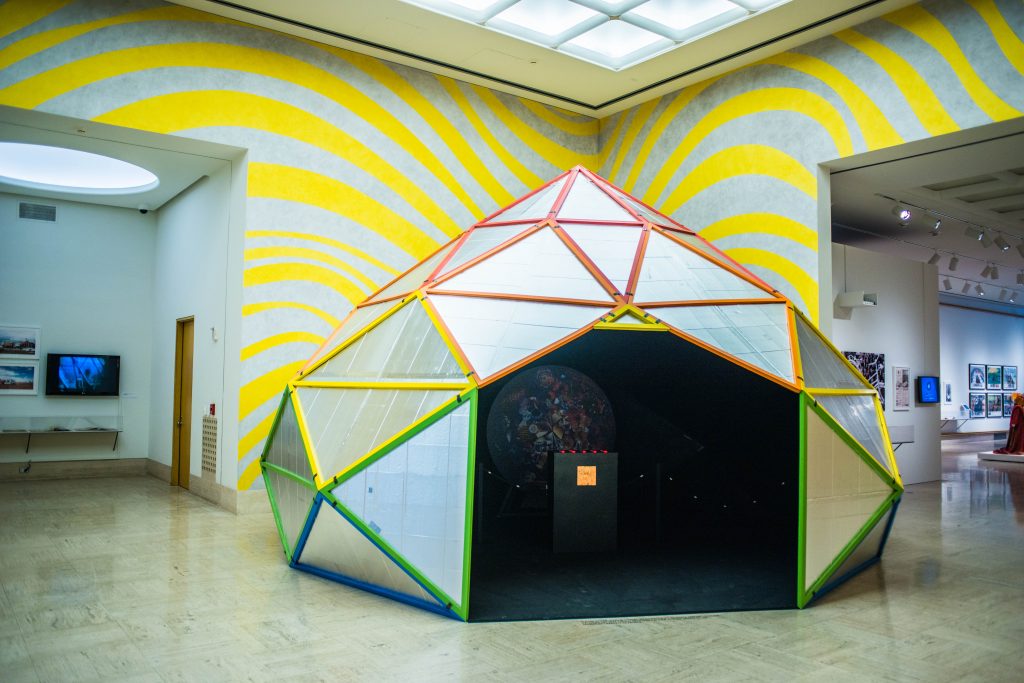